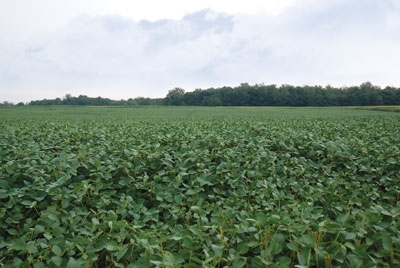 When Monsanto introduced its Roundup Ready technology 15 years ago, it changed the way most farmers grew soybeans.  With the expiry of the Canadian patent for the original technology in August 2011, the soybean growing landscape is about to shift again.

Officials with Monsanto and other seed companies say there are several implications for farmers as the first widespread plant biotechnology trait goes off-patent.

While the development may pave the way for farmers to save original Roundup Ready soybean seeds, without penalty, for the first time, there are still some limitations that farmers and seed dealers need to be aware of. Given the complexity of the development, Mike McGuire, Monsanto Canada’s president and general manager, says the company started preparing for the post-patent era as far back as 2006.

McGuire notes the first priority was to be clear about when people had the freedom to save the seed.

Although the patent ended in August 2011, the contract obligations to not save seed under Monsanto’s Technology Stewardship Agreement (TSA) remain in effect. “We don’t want people jumping the gun a year ahead and then finding out later they made a mistake,” says McGuire, adding that the company will continue to operate the Technology Protection Field Check program while the TSA remains in effect. “We want to avoid the scenario where we do a random check on a farm and find out a customer has made a bad decision (about saving seed at the wrong time) because he wasn’t informed,” says McGuire.

Since early January 2011, Monsanto has been promoting several key milestones associated with the patent expiry:

As for the second point about seed companies having contractual obligations preventing farmers from planting saved seed, McGuire strongly suggests that farmers check with their seed company because there are some that will impose obligations.

For example, Pioneer Hi-Bred has always had obligations that limit seed to a single use. “Preserving intellectual property by limiting seed to single use allows us to reinvest into research and product development,” says Dave Harwood, Pioneer technical services manager, of the contractual obligations.  “Research investment is driving yield gains that increase the profitability of Canadian farmers.”

In another case, Syngenta Seeds has contractual obligations for its aphid-resistant, glyphosate-tolerant Aphid Management System (AMS) soybean varieties. Dave Townsend says contracts are needed because the company must be able to track the aphid management system in order to preserve the gene’s resistance. “It’s a full system so that we’re making sure we’re not getting any aphid populations that are developing resistance to the aphid resistance gene that we’ve got in there,” explains Townsend. “We’ve got CruiserMaxx for early season protection and then we’ve put in the Rag1 gene for aphid resistance that works together with the beneficial insects. If we ever do go over aphid population thresholds, we need to be able to inspect it and go back out to the field and spray to control that population.”

In addition to AMS varieties, Townsend says farmers using varieties with the original Roundup Ready soybean technology will be contractually obligated not to save seed.

It will also form the platform for the other technological innovations the company is working on, including dicamba-tolerant soybeans, low saturate fat soybean oil and Omega-3 soybeans.

McGuire is confident that once growers make detailed comparisons, they will choose the new technology over original Roundup Ready saved seed. “Seed companies are not going to produce Genuity Roundup Ready 2 Yield if farmers are not going to buy them, and there are strong indications that most of what they are going to have for sale is the new technology because they’re just yielding better,” said McGuire. “It doesn’t take long until you get to 2014 when we’re going to launch the dicamba-resistance stacked with Genuity Roundup Ready 2 Yield, which we’ll really be anxious to offer as a weed resistance management tool.”

Townsend concurs, saying the new technology is producing higher yields. “We’re seeing around a two-to-four bushel per acre boost on average over our current lineup in our plots and we’ve been doing that for the last two years.”

While Pioneer does not have plans to include the Roundup Ready 2 technology in its varieties, Harwood is quick to point out that he believes yield is a function of genetics and management, not a specific trait for herbicide resistance. “Our trial data shows Pioneer’s Y series soybeans with the original Roundup Ready trait perform very well against competitive RR2 varieties,” says Harwood. “Our right product, right acre approach maximizes the yield potential of growers based on their unique management needs in conjunction with our genetics. We think our customers appreciate having a choice.”

Pioneer is working on another technology, Optimum GAT, that is aimed to provide glyphosate and ALS tolerance, and would be stacked with the original RR trait. “It is our first choice as we look to expand our herbicide tolerance and we continue to pursue its commercialization,” Harwood explains.

Harwood says another technology in the pipeline is a trait profile that combines the Roundup Ready 1 trait with a 2-4-D resistance trait developed by Dow AgroSciences. “Pioneer has a licence for that trait. So we have two emerging herbicide technologies that will come to the market in the latter part of this decade,” he says.

Beyond the key date of 2013, Monsanto will continue to provide global regulatory support for soybeans grown from the original Roundup Ready technology until 2021 to allow the harvested crops to be sold and processed in domestic and international markets.

As Canada moves into the new era, the shifting landscape is being gauged by crop industry watchers across North America. The reaction of Canadian agriculture could provide a preview for growers and seed companies in the US, where that country’s patent protection for original Roundup Ready soybean technology remains in place until 2014.