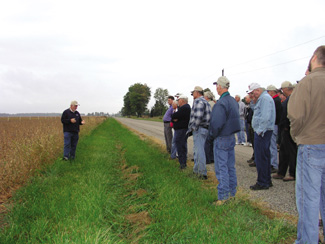 In portions of the prairies, the growing seasons from 2000 to 2003 were generally
quite dry. Accompanying these dry summers was a steady increase in grasshopper
populations and severity of crop damage. Surveys conducted in the fall of 2003
indicated that hopper egg levels were very high. A 'Hopper Watch' forecast map
that was created indicated huge portions of the prairies were potentially at
risk of severe to very severe infestations, a significant expansion from the
previous year when hopper damage was very significant. Obviously, the potential
existed for extremely severe infestations in 2004.

Given these circumstances, it was understandable that when the weather turned
out quite warm during the last 10 days of May, some southern Alberta growers
who had been preparing to deal with a potential plague of grasshoppers, became
quite anxious at the first signs of grasshopper activity. Indications are that,
in fact, some area growers probably made unwarranted spray applications of insecticides.

George Lubberts, an independent Certified Crop Adviser (CCA) located at Nobleford,
indicated that he had to 'talk-down' some of his growers who were overly-anxious
and wanted to get started with spraying for hopper control as soon as possible.
Dan Johnson, a recognized grasshopper expert at the University of Lethbridge,
agrees that "The tendency to spray too soon or too readily is always a
problem, but perhaps less so now, than in the past."

Lubberts actively discouraged his growers from spraying for hopper control
until there was ample evidence of crop damage or the confirmed presence of a
pest species of grasshopper in significant numbers. Johnson feels that too much
emphasis has been placed on economic threshold numbers (greater than 10 per
square metre). He adds that "It is the actual evidence of damage, not the
numbers that count," when making grasshopper spraying decisions.

Lubberts indicates that it is often the overwintering, non-pest species of
grasshoppers that usually appear prior to the first week of June and that spraying
of these insects should be avoided. However, he conducts some scouting prior
to that date in order to stay ahead of any potential problems. He also indicates
that his very best information sources are the excellent in-season grasshopper
reports that are regularly issued by Johnson. These reports, plus his own field
scouting information help him stay on top of any potential grasshopper outbreaks
that might develop.

"Differentiating between pest and non-pest species of grasshoppers is
very critical during my field scouting trips," says Lubberts. "If
the grasshoppers you disturb during your field scouting make a lot of noise
or are quite colourful, they are probably not a pest species and should not
be sprayed. Besides, they make an excellent source of food for birds."
He also says that, as has been his usual observation in previous years, the
majority of hoppers he found during the latter part of May in 2004 were generally
non-pest species.

Johnson agrees and indicates that "Only a handful of the 100 or so grasshopper
species found on the prairies ever become destructive agricultural pests. The
rest have no direct economic significance, but are a very important part of
the grassland food chain. The grasshoppers you see in May are usually not pests.
The greatest grasshopper damage in recent years has been caused by the two-striped
and clear-winged species."

The critical period of time for vigilance in grasshopper scouting is in late
May or early June, when the potential pest species usually start to hatch (depending
on soil temperatures). Lubberts indicates that "If I find significant crop
damage at that time, I'll start out by first recommending a 'spot treatment'
of the infested areas. By using this approach, it may be possible to avoid large-scale
outbreaks." Johnson strongly supports this approach and indicates that
"Timely, early spraying of five acres could prevent having to spray hundreds
of acres later on." Both individuals feel that this is a more sustainable
approach to pest control that also minimizes environmental risk.

When asked why the grasshopper populations never reached critical levels in
2004, Lubberts suggested that possibly rain and cold temperatures may have not
favoured the survival and growth of the newly hatched grasshoppers. Lloyd Harris,
of AgView International in Regina, indicates that "In Saskatchewan, Mother
Nature seemed to conspire against the grasshoppers in June and early July. Every
time conditions were right to encourage hatching, cool and rainy weather hit
them before they reached significant populations."

According to Johnson, "It is not unusual for grasshopper egg-hatching
to be setback if wet and cold soil conditions are experienced in May and June.
However, during this past growing season, the conditions appeared to be heavily
stacked-up against the development of grasshoppers throughout the growing season."

What is Johnson's grasshopper prognosis for 2005? He indicates that "Rain
during August and early September made it difficult for grasshoppers to mate
and produce egg pods. Moist soils also favoured increased fungal growth that
attacked grasshoppers, so a significant decline in hopper populations is anticipated."
-30-

On-line learning about hoppers
Dr. Dan Johnson at the University of Lethbridge maintains a web site featuring
regular updates on grasshopper status. The 2004 reports can be accessed at:

Once next spring's grasshopper season starts, change the '04' to '05' to follow
progress reports that will be issued in 2005.

Do you want to test your skills in differentiating between pest and non-pest
species of grasshoppers? Check out the following site:

Certified crop advisers across Ontario assist growers
with crop management decisions. Since 1996 individuals from most growing regions
in Ontario have entered this intensive program. They maintain their designation
with continuing education credits by attending courses and workshops. Look for
the CCA emblem!