Ontario seed corn acreage was down this year, at about 15,000 acres, according to Chris Nanni, administrative manager of the Seed Corn Growers of Ontario. 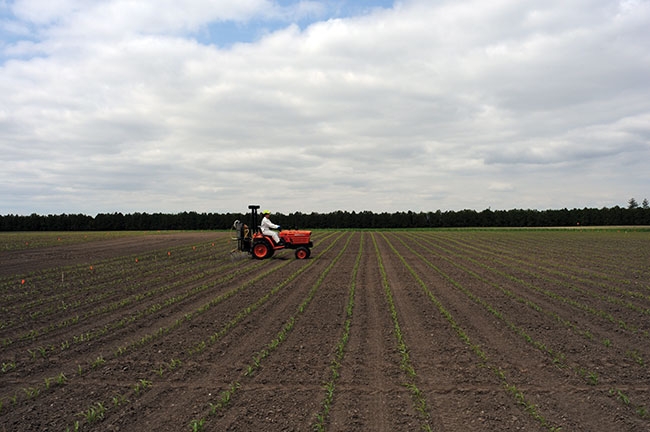 Herbicide application across seed corn inbreds; each row of corn is a different inbred.

Last year Ontario producers planted about 17,500 acres, but a few years ago acreage reached a peak of 33,000 acres in the province. It’s partly due to that level of production that acres are down now, according to Nanni. “Low prices with lots of seed in the larder, so to speak, leads to decreased acres,” he says.

No crop is without its problems, whether those are related to weather, markets or agronomics, but things have never looked better for seed corn producers in Ontario.

Despite provincial restrictions on the use of neonicotinoids, seed corn producers can still use these insecticides due to the crop’s sensitivity to pest pressure, according to Nanni. Historically, it’s weed pressure that’s troubled seed corn producers due to the lack of herbicides registered on the crop, but research is gradually overcoming this problem.

Robert Nurse is an Agriculture and Agri-Food Canada weed scientist based at the Harrow Research and Development Centre. He’s been involved with annual herbicide registration trials for seed corn since 2006.

“When we started this research, there were very few herbicides registered for seed corn versus field corn,” Nurse says. “Field corn has a whole toolbox of herbicides available. But the seed corn industry didn’t have many options available – maybe five.”

Nurse’s program is aimed at increasing the number of options, and it’s been successful. Since 2006, eight new herbicides have been registered for seed corn production: Converge for pre-emergence; Callisto for pre-emergence and post-emergence; Lumax; Peak Plus; Pardner; Shieldex; Impact; and Permit.

“And we currently have about three or four others that are about to go in for registration,” Nurse says.

Nurse’s program accepts up to 24 distinct inbreds per company annually from seed corn companies in Canada. Even though Nurse only tests inbreds from a couple of companies, several companies fund his research. This system works for everyone – even those companies not submitting inbreds – because, quite often, the knowledge and registrations Nurse’s program generates is useful to these companies because their inbreds will react the same way.

Herbicide application across seed corn inbreds; each row of corn is a different inbred.

“We compare the seed corn’s reaction to what we know doesn’t cause very much injury in the corn – Primextra-II-Magnum is our control,” he explains. “For most of the herbicides, we collect data for two to three years at a one-time rate, the proposed label rate registered in field corn, and we also do it at an overlap rate – two times the label rate. We compile that data and submit that package to Health Canada’s Pest Management Regulatory Agency for a user-requested label expansion.”

Nurse says that, so far, he and his colleagues have observed that the majority of herbicides registered in field corn can be tested in seed corn inbreds and are safe to use. There are some exceptions, particularly with Group 4 growth regulators such as 2-4,D or Banvel, which can cause severe injury in seed corn.

“We also see a lot of bleaching from the HPPD herbicides such as Callisto and Converge, but at the doses we’re applying, the corn is able to grow out of it quickly enough that it doesn’t cause a yield reduction. So the benefit in weed control outweighs the risk of injury,” he says.

Applications
Nurse says that new weed problems pop up all the time – for example, the spread of glyphosate-resistant weeds in the province.

One of the biggest weed problems facing seed corn growers is crabgrass. Large crabgrass has been found in Ontario. But Nurse’s program has improved the herbicide options (Converge, Callisto for post-emergence and Impact are some examples) against large crabgrass for seed corn producers.

Producers should take an integrated weed management approach to tackling weed pressure in seed corn, says Nurse, which includes herbicide use along with early season tillage, the use of cover crops and diversified rotations.

Nurse suggests tackling weeds with a pre-emergent herbicide while they’re small so they’re not competing with the seed corn crop, and follow that up with post-emergent herbicides later in the season if there are any escapes.

He stresses producers should practice herbicide rotation and tank-mixing whenever possible to prolong their use and slow the development of herbicide resistance.