November 6, 2014 - As crop rotations have become shorter and soybean yields have been increasing, more soybeans in Ontario are showing symptoms of nutrient deficiency.

“Soybeans are huge feeders and we think 20 per cent or even more of Ontario’s soybeans are deficient in potassium, so we need to apply more potash,” says Horst Bohner, soybean specialist with the Ontario Ministry of Agriculture, Food and Rural Affairs (OMAFRA).

For the most part, farmers in Ontario have been able to grow soybeans without having to add fertilizer unless soil tests are low. Nitrogen (N) is provided by the fixation in the nodules of soybean roots. As for the other key nutrients, the general rule has been to let the soybean crop scavenge the phosphorus (P) and potassium (K) from the previous corn crop.

To help determine whether adding fertilizer can boost soybean yields, a project was designed to assess a variety of blends and placements.

“There has always been this question: Does broadcasting really work compared to a two-by-two band or some form of getting it to the root zone in the spring?” says Bohner of the blends and how they’re applied. The project, which was supported by the Agricultural Adaptation Council, the Grain Farmers of Ontario, and the Ontario Soil and Crop Improvement Association, also evaluated what soil types would have the greatest responses based on existing soil test levels.

Five field-scale trials were held in 2012 at sites in Lucan, Varna, Kenilworth, Orangeville and Canfield. Two were planted using conventional tillage methods, while the other three were planted in no-till conditions.
In 2013, five more sites were added at Goderich, Lucan, Woodstock, Strathroy and Caledonia. Of these, three were no-till.

While Bohner notes the 2012 growing season produced fantastic soybean yields, many areas also experienced a prolonged period without moisture. Differences between fertilizer treatments were visible in the early season, and Bohner says there was no statistically significant yield response to any of the treatments when the yields were averaged.

In 2013, the growing season was more typical as considerable moisture was available in the spring and fall.

The study concluded that applying fertilizer when soil tests are low can produce a good yield advantage of about five bushels per acre. However, the results don’t support the use of starter fertilizer for soybean production when the soil tests are adequate.

“When the soil test was low for P and K, we had a response to any form of fertilizer in any way we put it on,” says Bohner. “When the soil test was more reasonable, we had a very hard time getting a response.”
Although yield responses were only evident when the soil test was low, a broadcast application of P and K provided as much yield as any of the other methods of application. The broadcast application produced an average yield increase of 4.2 bushels per acre, while applying the P and K in a two-by-two band produced an increase of 4.5 bushels per acre. At very low testing sites, banding had a slight advantage. Fifty pounds per acre of MAP applied in-furrow (in 15-inch rows) provided similar yield gains to fertilizer blends with both P and K.

For Bohner, the results show that it’s important to have enough nutrients in the soil for the soybean crop, whether it is left over from the corn crop or added during soybean planting.
“The real take-home message is do your soil test, know where your levels are at and feed the crop if you want reasonable yields,” he says. “When the potassium is low, there are very few nodules compared to where the K is high, so you’ve also got a nitrogen deficiency as well as a potassium deficiency if the soil test is low enough.”

As a next step in studying fertility for soybeans, Bohner is evaluating the economics of the “sufficiency approach” against the “build and maintain” method.

In the sufficiency approach, which is the basis of the recommendations from OMAF and MRA, just enough P and K are fed to the crop during the growing season.

“If you buy into the ‘build and maintain,’ what level do you have to go? We don’t have the answers for that yet,” adds Bohner.

The method will be given the opportunity to prove itself as the study will be conducted over a period of six to 10 years. 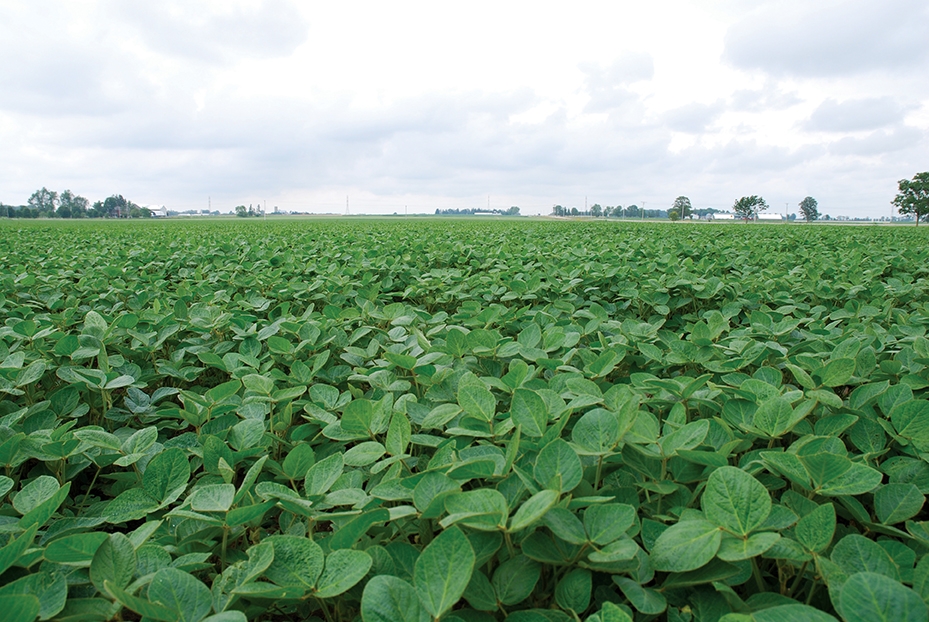