Group 14 herbicides are part of a group of chemistries that require light to be effective as an herbicide. In Canada, one of these compounds is called Heat (saflufenacil), and is a protoporphyrinogen oxidase (PPO-inhibiting) herbicide. There are other light-dependent herbicides, as well. Photosystem II (PS II) is a chemistry that interferes with photosynthesis and disrupts plant growth. An example would be AAtrex (atrazine) (Group 5). There’s also inhibitors of PS I, another part of photosynthesis, including compounds like Gramoxone (paraquat) (Group 22). These two chemistries are related and affect the transfer of electrons within photosynthesis.

Plants also need chlorophyll and carotenoids for photosynthesis to occur, and there are compounds that are inhibitors of PDS like Solicam (norfluzaron) (Group 12). Another compound inhibits one of the precursors to the carotenoid pathway such as Command (clomazone) (Group 13). Some of the new chemistries, the HPPD inhibitors like Callisto (mesotrione) (Group 27), are also part of this class of chemistries. All of these are called light-dependent herbicides because they affect one aspect or another of photosynthesis, either through the transfer of electrons or the synthesis of the pigments, and require light to be active. 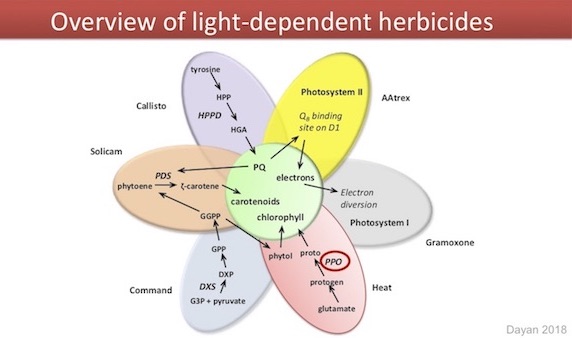 I’ll be talking about PPO inhibitors, an enzyme that is involved in porphyrin and chlorophyll synthesis. Why do we care about these compounds? When they work they work really, really well. PPO-inhibiting herbicides were first commercialized in the 1960s and their market share in the U.S. reached about 10 per cent in the late 1990s. A lot of herbicides have been synthesized that target this enzyme or pathway. About 100,000 compounds may have been synthesized that can inhibit this enzyme. Of course not all of them make it to be an herbicide. 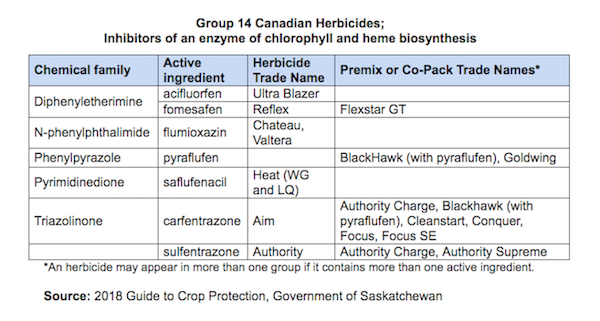 These PPO-inhibiting herbicides were initially used mostly as post-emergent, broad-spectrum weed control in soybean fields. That’s how they were primarily used for the longest time. Some like carfentrazone (Aim in Canada) were developed for cereal crops. Some were so active that they were used as non-selective herbicides.

When the herbicide is applied, it lands on the leaf surface and then goes through the top layer, called the cuticle. It goes through the epidermis, and then has to get to the target site. There it inhibits an enzyme that produces a compound called Proto IX. Proto IX is supposed to be in the chloroplast, but when you apply the herbicide, Proto IX accumulates outside of the chloroplast. When the sun comes out, Proto IX reacts with sunlight, what’s called reactive oxygen degradation, and basically destroys the cell structure of the plant. Within a few hours the plant dries up. It becomes paper-thin and completely dehydrates. Injuries like leaf cupping, crinkling, and bronzing appear on some plants, and then typically necrosis and completely dead tissue within a few hours. It’s a pretty fast-acting herbicide, and it works really well under the right circumstances.

Most PPO inhibitors degrade very quickly in the environment. Most compounds have a very short half-life and have very poor pre-emergence activity. However, a compound like sulfentrazone (Authority; Authority Charge) can have a very long half-life, 280 days. In the south US that may actually affect rotation of your crops because of the long residual activity of some of that chemistry.

The PPO inhibitors are very rapidly metabolized and don’t stick around in water. They’re considered to be a pretty safe chemistry.

A resurgence in use


Chart: Use of PPO inhibitors 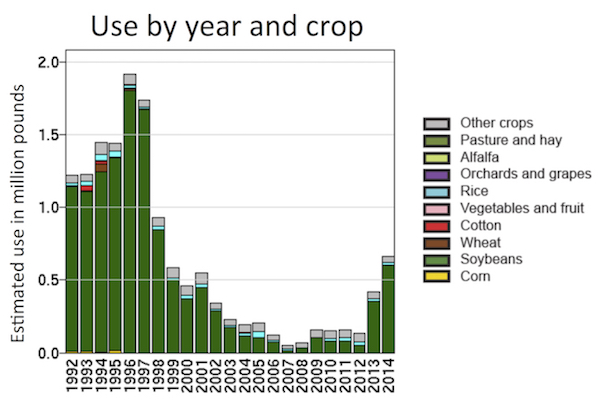 Some plants have become resistant to PPO chemistry. For most of them we don’t know the mechanism. But for waterhemp, Palmer amaranth, and ragweed, we know there have been mutations on the target site gene. That’s similar to what happens with ALS inhibitors and ACCase inhibitors. That’s what happens with some glyphosate resistance in some cases.

At the target site, there are two genes that make two proteins. One goes to the chloroplast; one goes to the mitochondria. When the plant became resistant, many scientists sequenced the gene for the protein that goes to the chloroplast because that’s where the herbicide works by preventing chlorophyll synthesis. However, no mutation was found at that location. Dr. Tranel at the University of Illinois sequenced the other gene that goes to the mitochondria. He found that there was a mutation where a whole amino acid was removed, and that was kind of unusual. But there was also something added to the gene, and that was the first time this was reported to happen in plants.

That’s important because these resistant plants now have the capacity to do the deletion and develop resistance, and have the capacity to move it to both locations. This has proven to be true in Palmer amaranth, water hemp, and ragweed. There’s no other herbicide so far that we know where plants have become resistant by this mechanism.

We looked at many genetic sequences to look for all the potential plants that have the same gene structure that could have a deletion. One of the plants is kochia. Kochia is a big weed in Colorado and in Canada. We now know that kochia is already predisposed to that mutation. If we keep using PPO chemistry the way we’ve been doing it and try to control kochia, most likely kochia will become resistant to that chemistry in exactly the same way that Palmer amaranth has become resistant. If you know a weed is predisposed to the mutation, then you should be scouting for weed escapes when you use that herbicide.

Now because you have resistance doesn’t mean you have resistance. What? Some interesting research was conducted by Peter Sikkema in Canada where fleabane escaped control by PPO chemistry. He demonstrated in the greenhouse that those seeds he collected in the field were resistant. What’s interesting is he went back the next year to the same field, applied the same herbicide and had 100 per cent control. An escape does not mean that your field is infested with the resistant weeds. In this case, it could be that the resistant weeds did not over-winter very well. So be on the lookout, but don’t freak out. If you have an escape it could be just something that’s a freak accident. But always be on the lookout for those escapes because we know that it can happen.

I’m not very familiar with the Canadian system, so suggested management strategies come from Arkansas where they deal with PPO resistance all the time in soybean. These may not necessarily be applicable to Canada. Use two active ingredients at planting, typically metribuzin (Group 5) and a Group 15 such as acetolachlor. Both are needed for successful residual activity. Then 21 days later use a post-application of glufosinate (Group 10), dicamba or 2,4-D (Group 4s) tank mixed with Dual (s-metolachlor; Group 15) for additional residual activity. In Arkansas, glyphosate is not useful because most major weeds including PPO resistant biotypes are already resistant to glyphosate. ALS herbicides are not useful in Arkansas either, as about 50 per cent of weeds have resistance to this group.

For more stories on this topic, check out Top Crop Manager's Focus On: Herbicide Resistance, the first in our digital edition series.