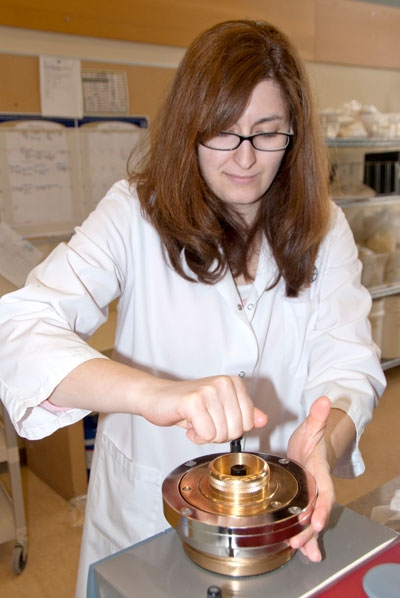 Technician Rosa DeStefano prepares a dough patty for alveograph testing. photos courtesy of the Canadian International Grains Institute. Desert durum from the US has always held the high ground when it comes to gluten strength.

Desert durum from the US has always held the high ground when it comes to gluten strength. It possesses that elusive protein quality that gives pasta its world-renowned “al dente” texture, or bite. Now, Canadian breeders are bringing forward varieties that may open that market up for Canadian farmers. “Both of these sister varieties present the first opportunity for us to market an extra strong durum into Europe,” explains Lisa Nemeth, technical manager at the Canadian Wheat Board (CWB).

“Cadmium levels in other varieties we had before were too high, above the European tolerance of 0.2 milligrams per kilogram, or 0.2 ppm, that we couldn’t take the risk.” China and Japan also have adopted the same tolerance as Europe, which is based on Codex Alimentarius recommendations.

In the past, durum grown on the Prairies accumulated relatively high levels of the cadmium that is found in the soils. Cadmium is a naturally occurring heavy metal that is a known carcinogen and its level in food is regulated in most countries.

These two new extra strong durum varieties, Eurostar and Brigade, were bred by Dr. John Clarke at the Agriculture and Agri-Food Canada research station at Swift Current, Saskatchewan, in the heart of durum country. For years, breeders have been working on reducing the cadmium uptake in Canadian durum varieties, with their success culminating in varieties like Strongfield, which has low cadmium but conventional strength. Finally, Eurostar and Brigade demonstrated low cadmium along with the extra gluten strength and will be available to farmers commercially in 2011 for the first time.

Launching a new type of cereal onto the market is a complex process. A team of experts joined forces to educate and learn from customers and prepare them for the introduction of these new durum varieties. Nemeth, from the CWB, Elaine Sopiwnyk, head of analytical services at the Canadian International Grains Institute (CIGI) and an expert from the Grain Research Laboratory at the Canadian Grain Commission travelled to end-use manufacturers in Italy and the US, and worked with the various quality teams to gain a better understanding of where and how extra strong durum fits into their process. “There are specific tests that are used to evaluate gluten strength: the alveograph, gluten index and various organoleptic evaluations,” says Nemeth. “It’s the latter that can confuse the picture. Every manufacturer (just like every brewer, for instance) has very specific sensory requirements of their end-product pasta, most notably the ‘bite’.”

It is this combination of tests that makes it so difficult to get into the customer’s head and understand exactly what quality it is they need in a variety and why. Additionally, because Canadian durum is almost always used in blends, it is even more difficult to assess. “They know what they want, but we are not always sure how we’re meeting their needs,” says Nemeth. “That sometimes will take a few years of using the variety in their manufacturing plants.”

Farmers can grow identity preserved Eurostar and Brigade. Check out www.cwb.ca, or contact Alliance Seed Corporation or Viterra for more information on the program.

Breeding is a process that strives for continual improvement. Looking ahead, there will be more and improved durum varieties for farmers. In winter 2010, five of the seven durum varieties in their second year of evaluation were supported for quality, with two having extra strong gluten. Of the 11 first-year varieties evaluated, five were supported, all conventional types.

Unfortunately, the 2010 growing season took a toll on the durum testing locations, and nothing was suitable for further evaluation. This will set the process back a year.