Features Agronomy Fertility and Nutrients
ESN in corn – does it pay?

ESN controlled release nitrogen (N) from Agrium is well proven in the U.S. Over 1000 site years of research have very well documented where ESN can be profitable, specifically on soils with risk of leaching, volatilization or denitrification losses due to excess moisture. Research is only beginning to identify where ESN fertilizer on corn makes sense in Western Canada.

“In Western Canada, corn growers most always put all their nitrogen on upfront as urea in some type of preseed – fall or spring – or side-banding application at seeding. Whether ESN is a good fit needs to be looked at on a case-by-case basis,” says Ray Dowbenko, agronomist with Agrium at Calgary. “If there is high loss potential, a split application of urea N or using ESN makes sense.

High yielding corn has high N fertility needs in the middle to later part of the growing season. Research by soil fertility specialist John Heard with Manitoba Agriculture, Food and Rural Development (MAFRD) showed the maximum rate of N uptake in corn is 1.8 to 1.9 lbs N/ac per day between V8-VT and R1-R5 growth stages.

Unlike other small grains like wheat and canola, which have significant N needs right out of the starting gate and a shorter maturity, N uptake in corn is delayed to the V4 stage of growth, with increasing and large demands later in the growing season. That means N can be sitting in the soil for a longer period of time and at greater risk of loss.

“Fall applied is done by many Manitoba corn growers because they do not wish to work the soil in the spring and want to seed directly into a firm, moist seedbed. The single year we tried this [Carman in 2006] it was a very dry spring, and fall N worked well since there were probably minimal losses,” Heard explains.

In years when early spring conditions have higher rainfall, especially on well-drained soils, the potential for loss is higher, and a case for ESN or other controlled release N products could show a benefit over urea. 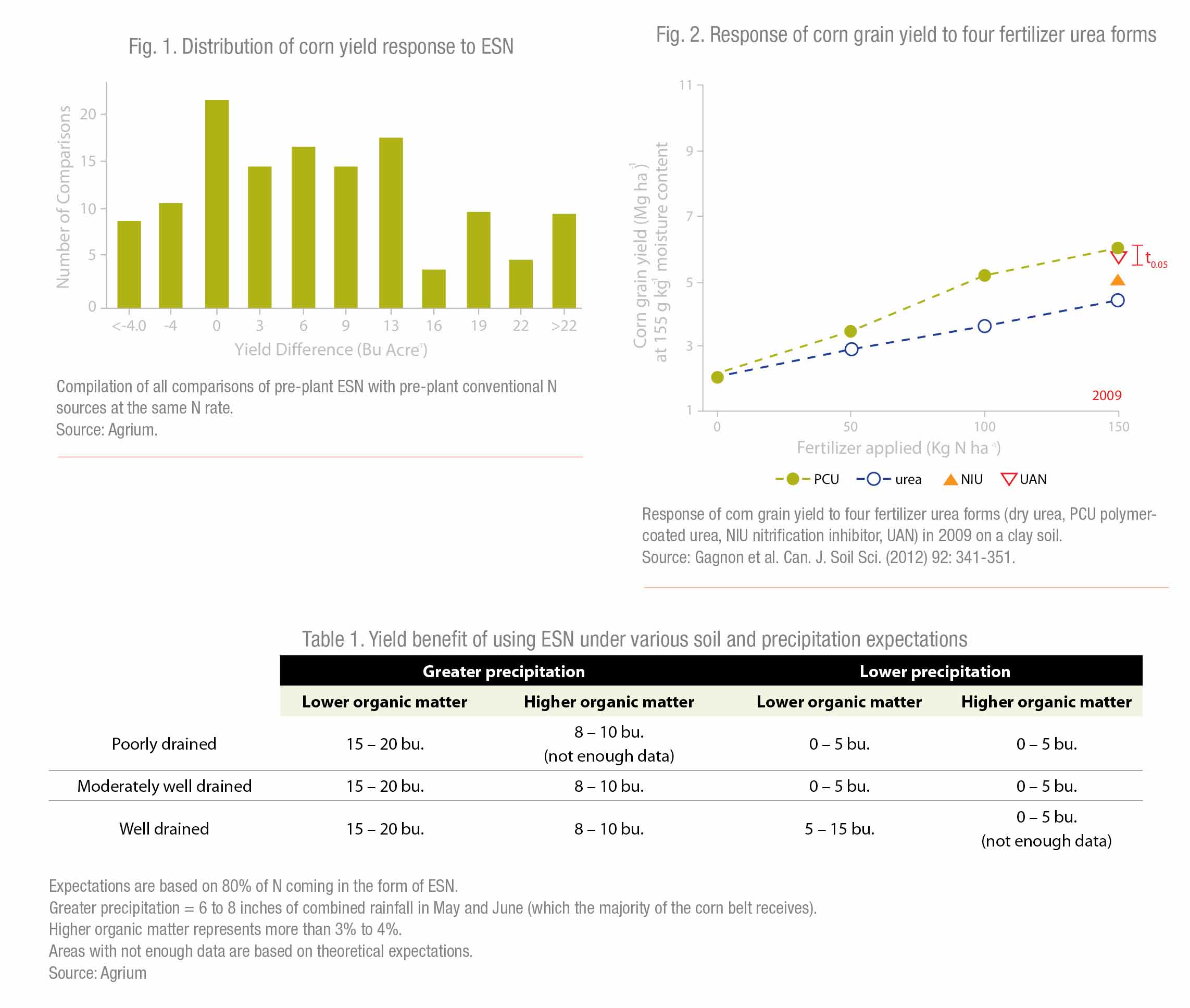 Research shows value of ESN
Dowbenko says ESN has the best fit where most of the N is applied in advance of crop demand, and winter and spring is generally characterized by excess moisture. If the soil is sandy and subject to leaching, the benefit may be even greater.

The rate of N release for ESN is governed by soil temperature, which also influences corn growth. The rate that water and N move through the ESN polymer coating is slow in cold soils and increases as the soils warm up. This may help match N release with corn growth. Typically, about eight to 15 per cent of N is released in the first 10 days, 40 to 60 per cent in the first month and 85 to 90 per cent within 60 days.

“In the U.S. we have over 1000 site years of data. We’ve seen a 19 bushel per acre better yield with ESN compared to a split application of urea at seeding and UAN side-dressed,” Dowbenko says. “In many comparisons, there are large yield advantages with ESN in the U.S.” (See Fig. 1.)

In Canada, few studies have looked at ESN performance under cool and humid climatic conditions. A three-year study led by Bernard Gagnon with Agriculture and Agri-Food Canada (AAFC) on a clay soil near Quebec City compared the effect of ESN, a nitrification inhibitor N, dry urea, and UAN on corn yield. Urea, ESN and the nitrification inhibitor N were pre-plant broadcast and incorporated, and the UAN was applied as 30 lbs N pre-plant broadcast and the remainder of 120 lbs N side-banded at the six leaf stage of corn.

An economic analysis by Gagnon revealed that ESN gave comparable net returns at equivalent N rate as UAN in wet years. Results indicated both the PCU and UAN treatments outperformed urea by approximately $38/ac in 2008 and $106/ac in 2009. The researchers concluded that controlled-release urea would be an additional option for farmers instead of side-dress UAN for fertilizing corn grown in Eastern Canada.

“We know these two additional treatments might not be the ideal choice for application, but sometimes producers might have to do it because of weather conditions,” Cavers says.

Once the three years of trials are completed, Cavers hopes to see some trends in which ESN best fits for corn growers in Manitoba. Based on what he has seen so far, he thinks ESN might have a fit where soil and weather conditions are sub-optimal, such as heavy rain during the growing season and sandier soils.

“That’s part of the reason we are doing the research over three years, to get variable rainfall patterns on the different soil types and see the impact on the various fertilization methods,” Cavers explains. “Producers may not always have the best conditions to seed under, so we wanted to look at many different treatments over the three years.”

“With shorter season corn that matures earlier, we need to find out if ESN with controlled release is as important to match corn growth rates as in the U.S. with a longer growing season and higher yield potential,” Dowbenko says.

For now, Dowbenko refers growers to a matrix developed based on U.S. data, which shows the yield benefit of using ESN under various soil and precipitation expectations (see Table 1). If farmers grow corn in a heavy rainfall area or under irrigation, and with lower organic matter soils, ESN might make sense.

Currently, ESN is priced at approximately $0.20 lbs N more than urea. At a 120 lbs N/ac fertilizer rate, that means an additional $24 per acre cost. With corn prices around $4.30 per bushel, ESN corn yields would have to be 5.5 bushels per acre higher than if fertilized with urea.

Based on what he has seen, Heard sums up best where ESN could be of benefit in Manitoba. “My extension message is if it is a wet year or soil prone to wetness we might experience losses, especially to fall applied N. ESN would be expected to prevent that loss, leading to higher yield. In years that are normal or dry, N losses are insufficient to cause yield differences,” Heard explains. “It is up to the grower to assess their level of risk – they know the field, whether it is well drained or not – and then they can fertilize accordingly.”

Looking beyond just yield, Dowbenko says ESN offers some other benefits corn growers may consider. It gives flexibility in the application window, and could replace a V6 top dress with N application at seeding or even a fall ESN application under certain conditions. This flexibility could help offset some of the additional cost of ESN. ESN can also provide environmental benefits by reducing N loss to the environment. 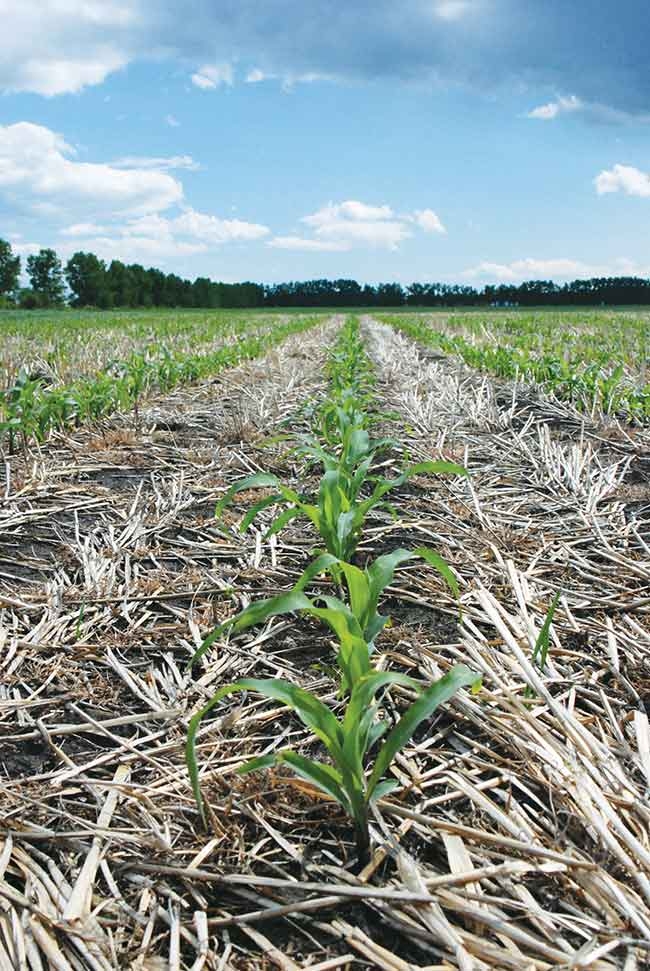 Controlled release fertilizers might be a benefit in years of heavy spring precipitation. ESN controlled release nitrogen from Agrium is well proven in the U.S. Over 1000 site years of research have very well documented where ESN can be profitable.
Print this page