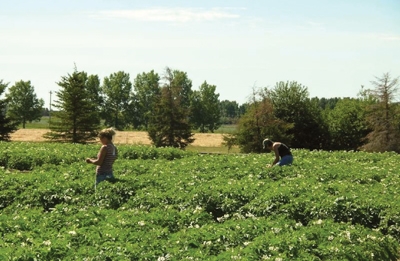 Petiole results with ESN may look different but the management practices are much the same as with urea. It has taken a few years

It has taken a few years, but now there is research showing that slow-release nitrogen can benefit Canada’s potato growers on several fronts.

The product is new, although the concept is not. Coating urea granules with a product to slow the rate of release has been discussed for decades. The New York Times mentioned the concept in a gardening column dating back to March 27, 1966, noting “The nitrogen in the fertilizer is derived from two sources: one (is) a quickly available nitrogen and the other a urea-formaldehyde polymer. Each granule has a coating which protects the core of nitrogen inside. The coating has microscopic holes which release the nitrogen slowly to the lawn.”

Agrium Inc. introduced its product first for the American corn belt in January 2004. Marketed as ESN (Environmentally Smart Nitrogen) through Agrium Advanced Technologies, the product is guaranteed to contain 43 percent nitrogen. The semi-permeable coating allows water to diffuse through and slowly dissolve the urea granule.  The release rate is controlled by soil temperature and moisture supply.

Production has quickly expanded. Agrium upgraded its facility at Carseland, Alberta, in February 2006 to a 150,000-tonne capacity. The Carseland site also produces conventional nitrogen products and a controlled-release fertilizer for specialty applications. In 2010, Agrium completed construction of a second ESN facility, with a 120,000-ton capacity, at New Madrid, Missouri.

Canada’s potato industry became seriously interested about ESN in spring 2006 after the Canadian Food Inspection Agency approved ESN as a nitrogen source for potatoes. That year, in fact, a preliminary study with potatoes looked promising.

Potato industry funding for research had been held back until there was confidence they would be able to use the product, says Dr. Michele Konschuh, potato research scientist with Alberta Agriculture and Rural Development (AARD) in Brooks. A three-year formal research study began in 2007 in Alberta at the Crop Diversification Centre South in Brooks, and at Vauxhall, at a substation of the federal Lethbridge Research Station. Results were announced in 2010. Funding came from Agrium, AARD, the Potato Growers of Alberta and the Agriculture and Food Council of Alberta.

Recommended with caution
“Our research showed that you can use it; that there are some good reasons, some good applications, for doing so,” Konschuh says. “We recommend ESN with caution.

We thought it fit well with Russet Burbank, a full-season variety that has the highest number of potato acres in Alberta, but people need to use with a bit of caution because of the maturity angle.”

Results should apply with full-season potatoes anywhere they are grown in Canada. However, results could be different for a short-season potato, she says. “In our area, in early August the nitrogen is still becoming available. If you harvest in early August, you’re going to have trouble with maturity, skin-set and harvesting. We harvest Burbank in September and October.”

Growers will pay a premium for the slow-release nitrogen, but they can plan to use less nitrogen in total. “We wouldn’t recommend putting it on at the same rate, because it’s all there. You’re not going to lose as much to denitrification, leaching and other things,” explains Konschuh. “If you’re confident that you’re not going to lose it during the season, you can get by with less. We actually found in our trial that we could get by with less urea as well. That may be because we didn’t lose any, but it also may be that we just over-applied nitrogen.”

The research also led to this additional advice from Konschuh: “It’s nice to hedge your bets and split the pre-plant application between urea and ESN. That gave us a pretty good return. You could go all ESN but you run the risk that, if it is a cooler year, the nitrogen might not become available when you need it.”

ESN may be a better fit for Manitoba, she notes. Compared to Alberta soils, Manitoba soils warm up faster and often have excess moisture. The polymer should enable earlier transfer of nitrogen to the seedling crop while reducing losses due to leaching.

Alberta’s industry expects cool springs and dry conditions that require irrigation as well as more management time. “Most guys here fertigate two or three times a season, but people are trying to get away from it,” she says. “About 70 percent of our urea is applied pre-plant in the fall. They apply additional nitrogen in spring at hilling time, then fertigate later through the pivot. If we can split urea and ESN with one spring pre-plant operation, we’d save money and relax the nitrogen management. You wouldn’t have an application at hilling and you wouldn’t have to fertigate.”

Growers who try out the ESN option, she says, should expect a learning curve, particularly a change in results from petiole sampling. “Your petiole results (with ESN) may not look the same as if you apply urea straight,” she says. “You can monitor them for your information but you don’t need to manage your crop the same way as you would with urea,” says Konschuh. “We didn’t see anything detrimental with ESN, unless you put all your eggs in that basket and apply it late. Then, it really could hurt you if the year didn’t have enough growing season to finish up.”

Private sector input
Alberta’s ESN study with potatoes is balanced by parallel work in New Brunswick, Manitoba, Minnesota and Idaho, says Ray Dowbenko, senior agronomist with Agrium, based in Calgary. “The work in Canada and the United States shows we can put all the nitrogen down pre-plant, and we don’t have to top-dress,” says Dowbenko. “At Vauxhall, there was very little difference between the growers’ standard practice, the split application and ESN pre-plant. At Brooks, the difference in the three-year site average was about 1.7 tons more potatoes per acre from the pre-plant ESN than from the split application at full rate.”

Two rotations in the Maritimes are showing growers benefit with two to five more tonnes per hectare (0.9  to 2.2 tons per acre) from the ESN pre-planting treatment. “It definitely allows the grower to put all of the fertilizer on ahead of planting. He saves the time and labour and expense of going out in-season while managing to get as much or more potato. It’s working well,” Dowbenko says.

Agrium retailers at Portage la Prairie, Manitoba, have tried producing shorter-season potato varieties with blends of ESN and urea pre-plant. According to Dowbenko, results to date have been favourable.

The different studies, he concludes, point to reduced labour, reduced field time, reduced leaching, lower greenhouse gas emissions, lower fertility expenses and increased potato yields. “ESN does exactly what they thought it was going to do,” he says. “Now we have a project in China and Inner Mongolia, using a polymer-coated product the same way we’re starting to use ESN here.”

The Alberta potato study with ESN is posted online at www.smartnitrogen.com and at www.agric.gov.ab.ca.