Hard-to-control and herbicide-resistant weeds are increasingly becoming a challenge for growers in cropping systems. A new weed control system that helps growers address these challenges will be available in Canada for corn and soybean growers. Enlist Weed Control System includes a new herbicide-tolerant trait technology and herbicide for corn and soybeans that builds on the established glyphosate system.

“The new Enlist technology system maintains the flexibility and utility for growers, but it adds a second mode of action into the system to combat hard to control and resistant weeds,” explains Jeff Loessin, portfolio marketing leader – crop protection, Dow AgroSciences Canada Inc. “Adding this multiple mode of action in soybean or corn cropping systems adds another level of weed control management. It helps from a resistance management point of view to make sure growers are getting the extra mode of action alongside glyphosate to help delay the onset or chances of developing resistance, while achieving high yields.”

Dow AgroSciences has received registration for the Enlist corn and soybean traits in Canada, but waiting for final approvals in other growing locations such as the U.S., Brazil and Argentina, and import markets before full commercialization. “The first trait is Enlist corn, which is stacked with Roundup Ready Corn 2 and SmartStax, and will be made available in leading hybrids,” says Loessin. “The traits registered in soybeans include the Enlist Soybean trait stacked with Roundup Ready 2 Yield, and Enlist E3, which is our Enlist trait combined with our own glyphosate tolerance trait. Hyland Seeds and Mycogen Seeds, the seed brands of Dow AgroSciences, will offer corn and soybeans with the Enlist trait to Canadian growers. We have also licensed the corn trait to Monsanto for use in their hybrids and the soybean trait to DuPont Pioneer for use in their varieties.”

No other crops are in the plans for Canada, although in the U.S., the Enlist portfolio also includes traits for cotton.

Enlist Duo, a new herbicide designed to go specifically with the system, is a blend of glyphosate and the new 2,4-D choline with Colex-D Technology. Enlist Duo is the first formulation that combines glyphosate and 2,4-D in a co-formulated convenient package. Loessin explains that Enlist Duo with Colex-D Technology combines the choline form of 2,4-D, which has much lower volatility than other forms of 2,4-D, with Dow’s drift reduction technology. Enlist Duo helps reduce off-target movement or risk of injury to adjacent sensitive crops. Growers are required to use low drift nozzles for application and the product use guide includes a wind guideline. Enlist Duo provides a significant reduction in drift and combined with the low drift nozzles, research trials have shown a 90 per cent reduction in potential drift.

“One of the things learned from the Roundup Ready cropping system is that too much of a good thing can result in the development of resistant weeds,” says Loessin. “We are promoting a responsible program approach to the Enlist system to encourage stewardship and integrated weed management practices to minimize the potential of further development of resistant weeds.”

Growers should not only rely on Enlist Duo herbicide for weed control, but also include a base or setup treatment of a soil-applied herbicide ahead of an Enlist crop to incorporate more modes of action, particularly in fields with glyphosate-tolerant Canada fleabane, ragweed or other hard to control weeds.

“We have been working with researchers at the University of Guelph, University of Laval and Agriculture and Agri-Food Canada in Eastern Canada, as well as at our own research locations, to evaluate the Enlist system under Canadian conditions,” explains Loessin. “We’ve worked closely with researchers like Dr. Peter Sikkema at the University of Guelph and others to conduct research under local conditions to validate the results from a weed standpoint. We looked at the performance of the Enlist technology in corn and soybeans under Canadian growing conditions, particularly on glyphosate-tolerant weeds such as Canada fleabane, common ragweed and giant ragweed in Eastern Canada. We also have research underway at our sites in Manitoba to validate the results under western Canadian conditions for hard to control and glyphosate-tolerant weeds such as kochia, volunteer canola, wild buckwheat, Canada thistle and dandelion.”

Once final approvals in other cultivation and import countries are complete, commercialization of the Enlist system in Canada will move forward. For 2014, some farmer experience plots will be established in Ontario and Quebec for Enlist corn, which allows growers to trial the crop with protocols in place to retain and use the harvested crop on farm.

“We expect to have commercial hybrids available in Eastern Canada in 2015 and it will likely be 2016 before we see corn and soybean materials available that will fit western Canadian growing zones,” adds Loessin. “We certainly see the need and opportunity for the Enlist system to play an important role in improving weed control for corn and soybean growers in both Eastern and Western Canada. Enlist adds another tool in the toolbox for managing weed control on the farm.” 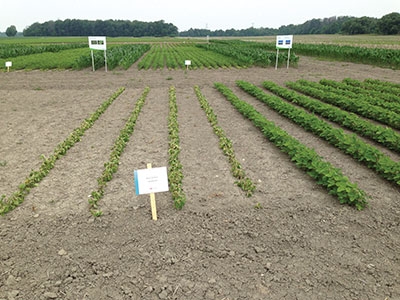 This photo Hard-to-control and herbicide-resistant weeds are increasingly becoming a challenge for growers in cropping systems.


Related
Managed introduction of Enlist corn in Canada announced
Potential for new weed control technologies in Canada
Canada fleabane: what can we do to stop this weed from taking over?
State of weed resistance in Western Canada