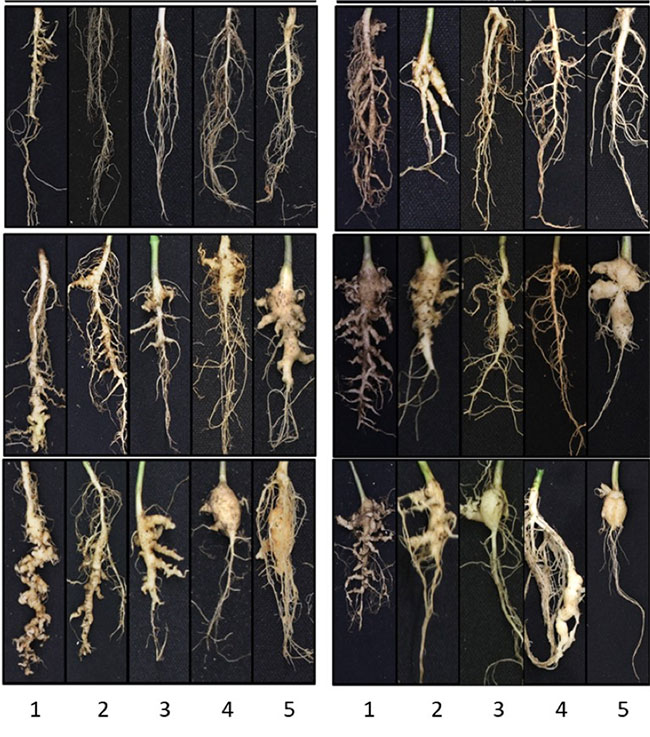 For canola growers, clubroot remains a serious threat as it continues to spread in Western Canada. Although cultivar resistance is the key to clubroot management, several “new” virulent pathotypes were identified that can break resistance in the first-generation clubroot-resistant (CR) canola varieties. Researchers and industry continue to look for new strategies to improve resistance performance and durability.

“Back in 2012, we started to see more clubroot disease in some clubroot-resistant varieties in a few fields in Alberta, along with reports of several new pathotypes that were virulent on all current resistant varieties in the marketplace,” explains Gary Peng, research scientist with Agriculture and Agri-Food Canada (AAFC) in Saskatoon.

“We worked with a breeding company to incorporate one of our AAFC resistance genes with one from the University of Alberta, along with an existing gene from one of the company’s varieties, to look at the potential of using multiple genes to broaden the resistance spectrum and durability against different pathotypes.”

Peng and his team then initiated a unique three-year study in 2016 to investigate the efficacy, performance and durability of canola lines carrying single and multiple CR genes. The CR genes were tested against “new” pathotype 5X and pathotype 3H (old pathotype 3) populations under simulated intensive canola-growing conditions. Researchers also wanted to look at the mechanisms of resistance for multiple genes versus single genes.

For the study, 20 canola-quality Brassica napus inbred and hybrid lines/varieties carrying single-, double- and triple-CR genes were produced by a breeding company. The varieties Westar and 45H29, both susceptible to newly identified pathotype 5X, were included as controls. 45H29 is resistant to old pathotypes 2, 3, 5, 6 and 8. The lines were assessed for resistance against field populations of 5X using inoculum from Stephen Strelkov’s lab at the University of Alberta. A similar second durability study followed with the 3H pathotype commonly found on the Prairies.

The study was conducted under controlled greenhouse conditions to simulate an intensive canola rotation over five generations, which took about 18 months for each pathotype and repeated once. Using a continuous rotation of each variety, the clubroot galls were collected and put back into the soil after each generation to determine the level of inoculum returned to the soil and disease severity in the crops. In the study, two different types of soil infestation were compared for the common 3H pathotype: one with a very high level of inoculum to represent the worst cases in Alberta, where the first-generation of resistance had deteriorated, and a second with a much lower level of inoculum, more representative of Saskatchewan and Manitoba.

“From the study, only two of the double-gene hybrid varieties were moderately resistant against all populations of 5X,” Peng says. “None of the single-gene varieties seemed to have sufficient resistance to 5X. Although we are still trying to fully understand the genetic composition, the CR genes on chromosome A8 (CRB) were effective to the old pathotype 3H, but less so or variable to the new pathotype 5X depending on the pathogen population.

“However, when CR genes of A8 (CRB) were combined with one of the CR genes on chromosome A3 (Rcr1 or CRM), moderate but consistent resistance was achieved against all 5X populations. The A8 region is fairly narrow but can include more than one gene, and is the area that provides moderate resistance against some other pathotypes. The two varieties with different combinations of two genes on A3 and A8 were the ones providing a moderate level of resistance to 5X.”

Another component of the project included a study of the molecular mechanisms of multi-gene versus single-gene resistance using RNA sequencing. Although researchers are still completing the analysis, early results show that, in response to 5X infection, many genes involved in plant immunity pathways were more strongly activated in varieties carrying these two CR genes, relative to those controlled by either of the single CR genes alone.

In other words, although similar pathways relating to plant defenses may be activated, the level or intensity of the response is stronger in the double-gene hybrids.

“In terms of performance and durability, the moderate resistance of the double genes against 5X never seemed to be significantly eroded over the study,” Peng says. “We also saw that the resistance did not change the inoculum population much except for in one case, even with the return of moderate-sized clubroot galls to the soil. In only one of the four experiments did we see a statistically significant trend of inoculum reduction, with lower inoculum levels resulting in the soil over the generations. Although the disease severity changes were not significant in the study, the single breeding lines were always higher in disease severity than the double-gene varieties.” 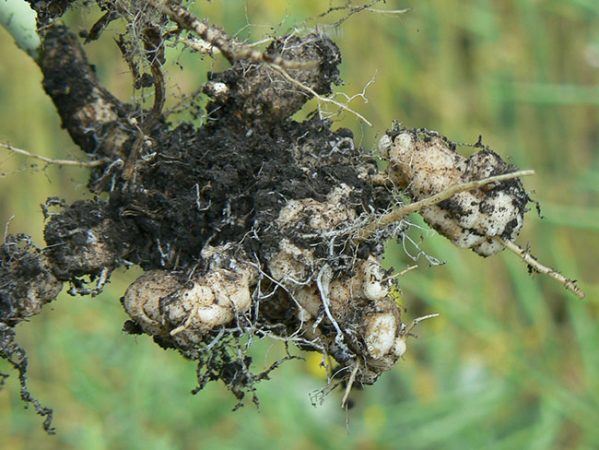 Clubroot remains a serious threat as it continues to spread across Western Canada. Photo courtesy of Leduc County.

In the study of repeated exposure to pathotype 3H, disease levels clearly crept up over the five generations of the single-gene varieties under high initial inoculum levels, particularly with those that carry the resistance on the A8 chromosome. However, with the double-gene varieties, there was very little change across the five generations at high inoculum loads, with only a trace level of disease showing up in the final generation.

At the lower levels of inoculum, the efficacy of resistance seemed to be maintained among all CR varieties, regardless of the number of CR genes involved. Further research on resistance against additional new pathotypes (2B and 3A, for example) is necessary to confirm the validity of this multi-genic strategy for enhanced resistance efficacy and durability.

The study results highlight the value of using multi-gene resistance or stacked CR genes of different modes of action for resistance performance and durability. “At the same time, maintaining low levels of inoculum in fields using longer rotations and other strategies, such as resistant varieties and patch treatments, is also important to reduce the load of resting spores in heavily infested fields,” Peng says. “Various studies, including some in commercial fields, have shown that extended rotations of at least two years between canola crops will provide a dramatic reduction in inoculum level.

“Extending rotations provides growers with the biggest bang for their buck, and a two-year break in canola would give close to a 90 per cent reduction of pathogen inoculum. With reduced inoculum levels, the resistant variety will perform with higher efficacy and perhaps longer durability.”

Good stewardship practices for clubroot management remain one of the best tools growers can use for longevity of resistance, reduction in inoculum levels and yield protection. In Manitoba and Saskatchewan, where clubroot is still found in a relatively small number of fields, prevention remains the number one priority. Limiting the spread of the disease from farm to farm still goes a long way.

For most of the other areas, the first-generation of varieties can still be effective due to their efficacy against the predominant race types on the Prairies. The second-generation of resistant varieties with double genes or new genes may provide a wider spectrum of resistance in most of the fields. Peng notes that the task for all of us going forward is to focus more on stewardship strategies against clubroot on the Prairies that will help these second-generation varieties perform well and for a longer duration.