Intercropping can improve yield stability and efficiency of land and input use. 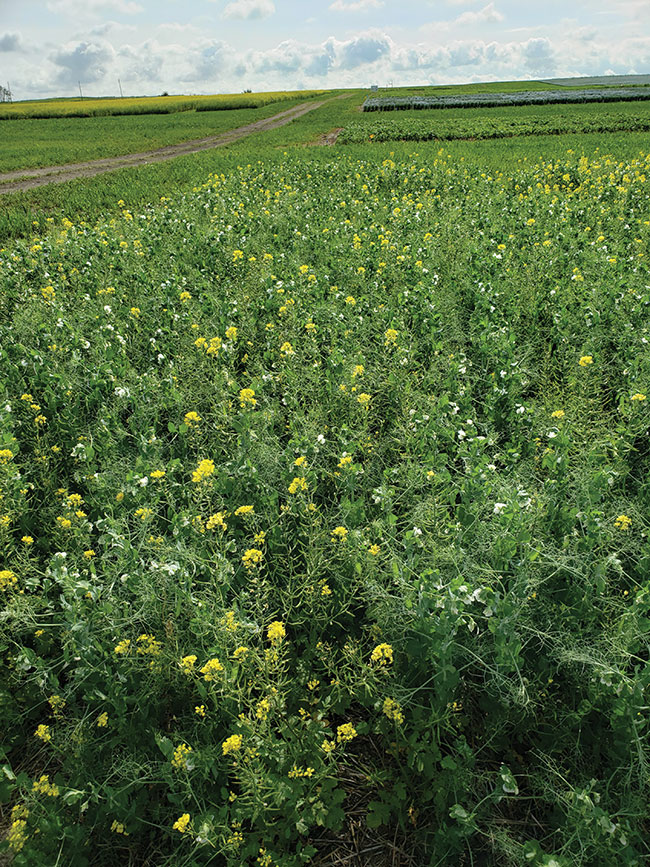 Intercropping systems that include pulses can contribute to reduced fertilizer requirements through nitrogen fixation and enhanced cycling and uptake of nutrients. In a recent study, researchers assessed pulse and oilseed intercrops to better understand how intercropping influenced yield, crop nutrition and soil nutrient cycling.

“We conducted a two-year study to compare two different oilseed-pulse intercrop mixes of chickpea-flax and pea-mustard, along with monocrops of each crop,” says Jeff Schoenau, professor of soil science with the department of soil science at the University of Saskatchewan (U of S). “The study was conducted in 2019 and 2020 at two contrasting soil climatic locations in Saskatchewan, including Redvers representing the black soil zone and Central Butte representing the brown soil zone. In general, the conditions in both years were very dry, with 2020 conditions being slightly better, particularly at Central Butte.”

The project was led by Schoenau and master’s student Melanie Reid, in collaboration with Diane Knight at U of S, Lana Shaw at South East Research Farm in Redvers and Bill May at Agriculture and Agri-Food Canada in Indian Head.

“One of the main objectives of the study was to better understand nutrient availability and uptake efficiencies by the intercrops during the growing season and to document what is going on in the root zone,” Schoenau explains. “Plant Root Simulator (PRS) probes were placed in the fields during the season to measure the supply rates of nitrate and phosphate in-situ, and soil samples were taken to determine soluble organic N and C levels in the root zone of the crops. To make it easier to measure the interactions or synergies of growing the two crops together in an intercrop arrangement, we did not apply any fertilizer nitrogen (N) or phosphorus (P) in the main plots. However, smaller microplots within the main plots included treatments using 15N tagged fertilizer to detect origin of nitrogen in the plants and to track biological N fixation. We also wanted to see if there was any transfer of fixed N by the pulse to the non-pulse partner during the actual growing season.”

At the study sites, pea, mustard, chickpea and flax were grown as monocultures (control) and as chickpea-flax or pea-mustard intercrops. The intercrops were also grown in either mixed row or alternate row seeding arrangements. The yield of both grain and straw was measured for all treatments, as well as N and P uptake in the grain and straw. An assessment of the nitrogen use efficiency (NUE) of the intercrops was completed, which indicates the yield produced per unit of uptake. The Land Equivalency Ratio (LER) of the intercrops was also calculated as an indicator of the synergy in these systems. The LER is the ratio of area under monocrop to area under intercrop needed to give the same yield. An LER of greater than 1 indicates a benefit from the intercropping through synergy between the two crops.

“Although the growing conditions were drier than normal during both years of the study, the intercrops did perform well,” Schoenau says. “Overall, the data shows that the LER was greater than one for yield, plant N uptake and P uptake for the two different cropping systems, indicating a synergy between pulse and oilseeds in the intercrop arrangements. The higher LERs may be related to the benefit of having pulses in the mix, particularly from the additional N contribution by biological N fixation from the pulse. Supporting this, greater amounts of soluble organic N were found in the root zone during the growing season when pulses were present, along with higher PRS supply rates of available N.”

The NUE was higher at some of the intercropping sites compared to monocrops. This was more evident with the chickpea-flax intercrop, which may be partly due to less incidence of chickpea disease observed in intercropping compared to monocropping. Although the evidence from the 15N tracer microplots was variable, the measurements showed that on average there was about 20 per cent of the N fixed by the legume partner that was transferred to the non-pulse during the growing season.

“At some sites, that transfer of N was reflected more when we had mixed rows as compared to alternate row seeding arrangements,” Schoenau adds. “However, overall there were no statistically significant differences between the mixed and alternate rows. We did see differences in competitiveness between the partners of the intercrop depending on soil conditions. For example, legumes seemed to be more competitive under the low soil P availability conditions at the Redvers location. Peas are good scavengers of P and probably more so than the oilseed partner. At Central Butte, the really hot dry conditions seemed to favour the mustard partner.” 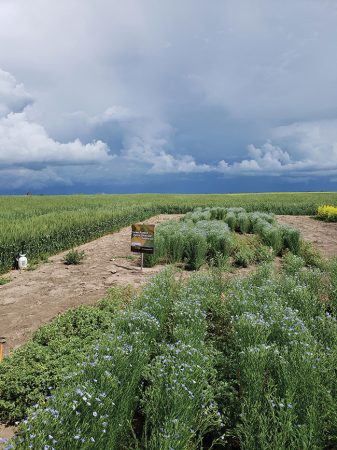 “Our study results point towards pulse-oilseed intercrops improving yield stability and land use efficiency by enhancing biological nitrogen fixation and nitrogen use efficiency. The pulse partner not only fixes N, but also transfers N to the non-pulse intercrop partner in this study. Although the growing conditions were dry, the intercrops showed higher NUE and a higher LER compared to monocrops. We expect to have the complete final results available early in 2022.”