Major research efforts underway to understand the diseases in cereals. 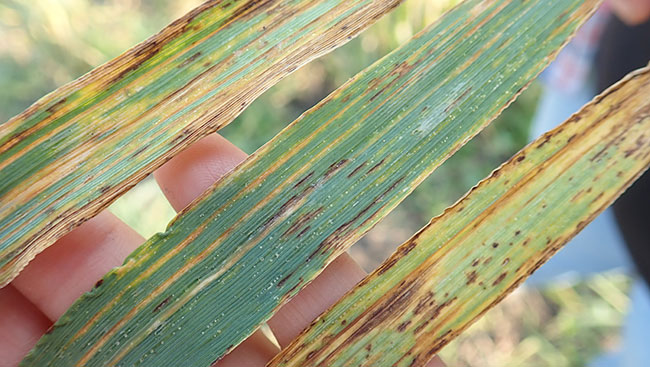 It would be nice if there were an antibiotic or other management options for this bacterial disease. Bacterial leaf streak (BLS) and black chaff were observed in at least one field on the Prairies in southern Alberta in 2013. However, previous observations of BLS symptoms have occurred in 2005 and 2012 and where bacterial streaming tests indicated a bacterial issue. Over the years, occasional observations of BLS symptoms have occurred in large scale barley fungal leaf spot resistance screening trials at AAFC Lacombe. Unfortunately, BLS symptoms have become more common over the last decade. Control methods are limited, but yield losses as high as 30 to 40 per cent have been observed in Idaho and more recently in southern Alberta.

“Currently, in Canada, BLS occurrence is limited to regions of unusual climatic conditions that favors pathogen growth and spread. For example, in 2020 in southern Alberta, the best-case scenario for it to show up occurred,” says Maria Constanza Fleitas, a plant pathologist in the department of plant sciences at the University of Saskatchewan. “May through June was wetter, while a combination of irrigation and localized wind-driven rain from thunderstorm systems and hailstorms likely facilitated dispersal and access of the bacteria into cereal plants.”

The southern Alberta locations, because they are close to the mountains, have warm days and cool nights. Moreover, localized severe weather systems in southern Alberta, characterized by heavy rain, hail, strong winds and irrigation, provide optimal conditions for the bacterium to get going.

Michael Harding, crop health assurance lead with Alberta Agriculture, Forestry and Rural Development in Brooks, says that BLS has become more common over the past decade. He says that in 2017-18 there were five fields confirmed with the disease in irrigated spring wheat. At least one field had 20 to 30 per cent yield loss. Outside of southern Alberta, moderate BLS symptoms were noted in a barley variety trial in the Castor region of Alberta in 2018.

“Unfortunately, we don’t have resources to do specific surveys for diseases like BLS, but we do have some information that we have gathered based on samples submitted, observations in the field and anecdotal reports,” Harding says.

“An informal poll of agronomists in the region affected revealed, anecdotally, that between 15 and 30 farm units were affected, representing thousands of acres of spring wheat. Most or all were in the irrigated regions of Southern Alberta, between the Red Deer and Milk Rivers,” says Harding.

BLS of wheat is caused by the bacterium Xanthomonas translucens pv. undulosa. It may also be associated with barley, but another related bacterium  Xanthomonas translucens pv. translucens is more problematic in barley. The causal bacterium is primarily seed-borne but it may survive in crop debris to infect subsequent cereal crops. Wind-driven raindrops can spread the bacterium. Infection occurs through plant wounds, possibly from wind-driven debris or hail damage, or through naturally occurring stomata leaf pores. 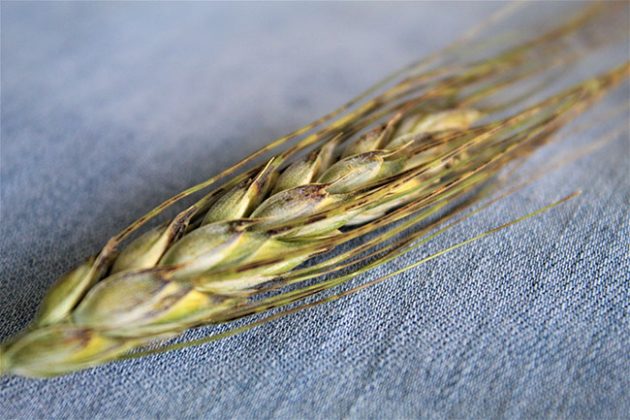 Black chaff symptoms in a wheat spike caused by
X. translucens comprising dark purple to black streaks on the glumes and alternating bands of dark (diseased) and green (healthy) tissue on the awns.
Photo courtesy of Maria Constanza Fleitas.

Early leaf infections show up as translucent, water-soaked streaks. The bacterium may be visible as a shiny glaze or dried clumps of bacteria on the leaf surface. The lesions are initially distinct but can later converge to cover larger areas of the leaves. The disease can also be confused with symptoms caused by Septoria species and tan spot disease. Fleitas says that lots of times it’s easy to misdiagnose the problem because it usually doesn’t occur in isolation. Often, there are other fungal diseases that can make it challenging to know whether BLS is present, and in a lot of cases BLS is present with other fungal diseases.

“With BLS, you have elongated areas that start off having a water-soaked appearance. Think of taking a leaf and crushing the leaf tissue between your thumb and finger. If you lay this leaf flat, the area that was crushed will have a darker green appearance versus a leaf that hasn’t been crushed. The darker more intense green is mainly due to cell walls/membranes being compromised as they leak cell contents,” explains plant pathologist Kelly Turkington with AAFC in Lacombe, Alta.

Turkington says that the lesions take on a tan or tan-brown colouration as the leaf tissue dies. With some moisture, droplets of bacterial ooze may appear on the affected areas, while tissues may have almost a glazed doughnut appearance where there is a layer of dried bacterial cells on the leaf surface. When damp, the leaves or affected heads may also have a very slippery feel due to the bacterial ooze.

During grain fill, the bacterium may infect the glumes, causing dark purple to black streaks on the glumes. This symptom is called black chaff, and under severe infection, can cause discolored kernels. Black chaff can also be confused with Septoria glume blotch symptoms, which have brownish-gray lesions on the glumes and awns of cereals. However, with glume blotch one can often see the fungal fruiting structures known as pycnidia that dot infected wheat glumes.

“This is an emerging pathogen, but it is not new; in Canada it was reported frequently over the past 100 years. Whether it’s being facilitated by storm systems, or it’s just always existed at very, very low levels in some of our grassy areas, or whether it’s moved around on seed, we think probably all of this is happening,” Fleitas says. “If the weather conditions are right, then BLS could become really problematic. In the U.S. it has been a recurrent problem for a number of years now, and now the pathogen has found its way into our cereal production systems in Canada.”

Sample collection in a barley field from Alberta of leaves with BLS-compatible symptoms (July 2021). These samples are later used to isolate the bacterium for further studies. Photo courtesy of Maria Constanza Fleitas.

Major research projects underway
A number of research specialists from the University of Saskatchewan, Alberta Agriculture, Forestry and Rural Development, the Canadian Grain Commission and Agriculture and Agri-Food Canada are leading several research projects to get some answers on the BLS situation here in Canada. One project is looking at BLS in barley. This three year project started in 2021 and is funded by SaskBarley.

The barley project seeks to develop a seed testing protocol to detect X. translucens on barley seeds using a  visual detection method from a colorimetric reaction. This technology would have an immediate application to help farmers ensure that the seed they are planting is disease-free.

Another objective also includes the establishment of a disease evaluation method to test seedlings and adult barley plants in the greenhouse/growth cabinet. This will allow screening of commercial cultivars for sources of resistance to help develop resistant barley genotypes.

Another barley objective is to collect barley samples from across Western Canada and test for BLS prevalence and virulence of X. translucens strains. “This information will indicate the extent of the problem to pathologists, agronomists, breeders, and farmers as well as other stakeholders of the wheat value chain,” Fleitas says.

A second project is funded from 2022 through 2025. It focusses on bread and durum wheat, with the same objectives as the barley project. Commercial wheat varieties will also be screened for sources of resistance. A field nursery for wheat will be established at AAFC Lacombe to enhance screening for the disease as part of the final phase of the research. This research is funded by Saskatchewan Ministry of Agriculture, Saskatchewan Wheat Development Commission, Western Grains Research Foundation, Alberta Wheat and Manitoba Crop Alliance.

Limited management options
Currently in the Prairie region, BLS is most likely seed-borne says Turkington. The pathogen affected the heads and kernels the previous summer, and then, when planted, the bacteria becomes active as the seed takes on water and are transmitted to leaf tissues. Then once lesions occur the bacteria can cycle rapidly on the plant during the growing season.

“It’s really important to keep in mind that bacteria double their population size faster, in minutes, than fungal pathogens that double in days,” Fleitas says. “BLS is also a polycyclic disease, and it reproduces more bacteria multiple times throughout the growing season.”

Fleitas says that fungicides don’t work because bacteria metabolism is different than fungi. She says that even if there were bactericides, the research that’s been done in the United States shows that, because the generation time of the bacterium is so short, the bactericide would require application on a seven to 10 day schedule throughout the whole growing season. “It’s just not economical to manage the disease with bactericides.” There may also be issues with non-target effects and generation of antibiotic resistance.

Variety resistance is the best hope for control. The University of Minnesota’s variety trials includes disease ratings for BLS. In barley, two western Canadian varieties, AAC Connect and AAC Synergy are rated 3 out of 9 for BLS, where 1 is resistant and 9 is susceptible. Other U.S. varieties range from 2 to 6, so there is some partial resistance to the disease. In wheat, a few of the U.S. varieties are rated as low as 2, with many in the mid-range of resistance.

In Canada, the barley and wheat research projects hope to be able to identify sources of resistance for breeding into commercial lines. Seed treatments may also offer some hope, if developed.

“Those two tools alone won’t solve the BLS. They can offer some incremental support for management but we’re going to have to use clean seed programs along with crop rotation,” Fleitas says. “We will use the seed testing protocols as a foundational pillar for clean seed programs. These protocols will help us understand the risks associated with a certain seed lot. We don’t necessarily need to say that if you have the bacterium in the seed you can’t use it. I don’t know if that is going to be reasonable, depending on how this disease plays out over the long term.”

Turkington says that scouting and lab testing can identify BLS in a crop. Some seed testing labs are developing seed tests, and the research that Fleitas is leading also aims to develop reliable seed tests. Through scouting and seed testing, growers can avoid introducing the pathogen into a field.

Crop rotation with at least two years between cereals may help reduce inoculum in crop debris, although it is thought that at present at least, crop debris is a minor source of inoculum. As BLS becomes more established the importance of infected crop residues will likely increase versus seed infection, much like it has in the U.S.

“Based on what’s happened in the U.S., BLS will probably be an issue that we will have to deal with in the long term, and this is why our colleagues decided to put the effort into gathering information on the disease that will help producers,” Fleitas says. “Staying as clean as we can from the start is going to be a really key piece to managing BLS, so really what we want is avoidance, because we just don’t have a lot of management options.”