Uncategorized
Ellis Seeds: Handing down the farm, one morning coffee chat at a time 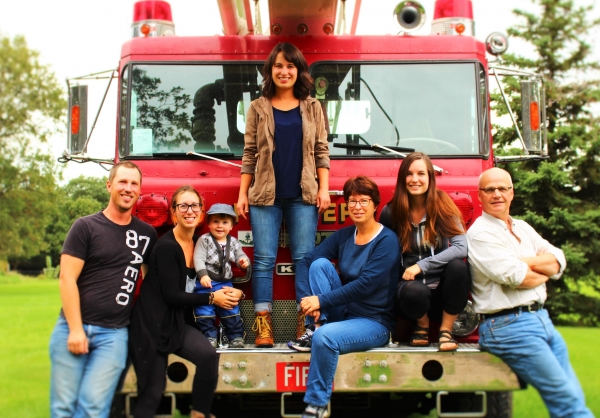 The Ellis family of Wawanesa, Man., prove the key to farm succession success is great communication.

Twenty-five years ago, when a very young Simon Ellis first perched on his Dad’s knee to steer a tractor, one thing was already very clear to him: someday, he was going to take over his family’s 1,250 acre farm in Wawanesa, Man., just as his dad, his grandpa and his great-grandpa had done before him.

What Ellis couldn’t have predicted 25 years ago was the level of commitment, communication and effort that would be required to help the family farm transition smoothly from his parents’ control to his own.According to Statistics Canada, just 8.4 per cent of farms currently have a written succession plan. That gap is a big concern, not only because Canada’s farmers now average 55 years old, but also because of the inherent challenges of farm business succession.

“Farm businesses aren’t simple to transition,” Ellis says. “There’s the financial side and the knowledge side, both of which are really important, but then there’s also the ‘life’ part too. The retiring generation has spent their life’s work building the farm. It’s very difficult for them to give that up. And it’s not just about giving up a profession; it’s giving up a lifestyle too, and often their house. The shift is huge.”

Ellis and his wife, Amanda, are about five years into a 10-year plan to take on ownership and operation of Black Creek Farm Ltd. and Ellis Seeds – the grains, oilseed and, in more recent years, certified seed business that has been in his family for 98 years.

They know exactly how they don’t want the transition to roll out.

“When my dad took over, my grandfather had been very sick for some time,” Ellis says. “The family had to rent out the farm for a while so there wasn’t much for my dad to take over other than the land base. He had to start from the ground up; figure it all out himself. That is not how he wants to pass the business to us. He wants to see this business operating strongly through transition so it’s set up for success and so it can carry the extra financial burden of supporting both the incoming and the retiring generation’s needs.”

Succession planning ahead
The ball began rolling for the succession plan a handful of years ago when Ellis invited his parents, Warren and Karen, to join him to listen to a speaker present on farm transition at Assiniboine Community College. While both generations knew succession planning was ahead, the presentation was the first time they’d begun to think through the detailed steps associated with successful transition.

Immediately after Ellis’ college graduation and return to full-time farming in 2013, he and his wife sat down with his parents to start hacking out particulars. With the guidance of a hired succession plan manager who helped formalize the process, both generations began by identifying their immediate, five-year and long-term goals, as well as their personal values.

“Family was a common theme, which is no surprise, but there were definitely differences. My parents were looking to retire, so their needs and expectations were different than ours since we were looking to start on building a business and a family,” he says.

A family affair
From the beginning, Ellis’ two younger sisters have been part of the discussion. Though they are each pursuing off-farm careers for now, everyone agrees that they are welcome to return to the farm if they ever choose.

“If either wanted to take full partnership in the farm, we’d have to review everything again. We have to make sure that option is available,” Ellis says.

Job two was to consider numbers. With the help of an accountant, the Ellis family appraised the business’ current and past financials, calculated retirement needs and then set out financial expectations to ensure each person’s near and longer-term needs were achievable. Then they outlined near-term and longer-term business goals and targets,

“Even through transition, you need to make sure you’re improving the business all the time rather than staying stagnant or falling backwards,” Ellis says.

Timelines and milestones
Over a handful of formal meetings in year one, the consultant helped the family set transition timelines and figure out steps and markers to achieve that schedule. Ellis wishes they’d formalized this component of transition planning further.

“The timing of the transition is hard because our priorities are different than my parents’ [priorities]. My wife and I sometimes feel like we’re not moving forward fast enough. At the same time, my parents probably feel we’re moving too fast and we need to be understanding of where they are at.

“If I could do it again, I’d have us write things down a bit more; come up with formal timelines and goals within the planning process. If we could have broken things into smaller bites and really set timelines, everyone would have been a little more reassured about where things were at,” he says.

Given the volume of knowledge to transition, a slow and methodical pace makes sense, Ellis acknowledges.

“We’ve always had good communication but we’ve never written stuff down. We’re a pedigreed seed farm, so there are tons of rules, tons of paperwork, a ton you have to just know. Transferring knowledge takes time and commitment – a lot more than I think I would have anticipated when we started.”

Communication is key
Above all and through every step, the Ellises focus on communication. Transition planning discussions crop up regularly during Ellis’ daily morning coffee with his dad, and with their wives and extended family in the field or at the kitchen table.

“There are certainly horror stories out there where the family members can’t even talk to each other without a mediator. We’re fortunate that we have very good communication. I can’t imagine how much harder this process would be if we didn’t already have good communication.”

Ellis highly recommends working with a professional, whether it’s an accountant who specializes in succession planning or an independent contractor or management group.

“Our expertise is in farming; theirs is in succession planning. They know what needs to be done, they can help mediate where necessary, and they can benchmark the health of your business against industry averages. It’s money well-spent.”

Ellis and his wife now handle the majority of farm management roles. This past winter, his parents managed to get away for a couple of months, leaving the operations and decision-making entirely to the younger generation. Of late, Warren has invested more and more time developing his hobbies (a necessity for a happy post-retirement life, Ellis says). And for the first time in probably 40 years, Warren, with the help of daughter Megan, planted the crops rather than handing that job off to a hired hand, since Ellis was available to oversee the seed retail side of the business.

Handing down the details
There’s still much work ahead. Warren and Karen are looking for a home to buy or a spot to build on so that Ellis and his young family can move into the farmhouse. Expert knowledge of countless details still needs to be passed from one generation to the next. And, given the high cost of land, the financial transition remains many years in the making.

As the transition progresses, the retiring and succeeding generations’ roles continuously shift. While this adjustment can cause friction in many families, open communication eases the shift for the Ellises.

“We’ve been very fortunate that my parents were aware they wanted to give us as much business decision-making space as possible. I rely on him pretty heavily to help with decisions because he has 40 years of experience, but, the final decision-making control now has shifted to my wife and I. But, it’s all about respect and communication. They try hard not to just say no. We try hard to include them in the process, recognizing they are still the owners of the business.”

The end of transition is coming into sight.

“We’re slowly getting there,” Ellis says. “When we first started transition planning, I was a bit naïve. I thought I’d get the farm one day and I’d plant the crop and that would be that. But, there’s so much in this business that you have to know and do. Once I fully realized it, I was a bit overwhelmed. But, you learn bit by bit and piece by piece. And slowly you make it yours.”