Looking for an aeration or natural air-drying system for your flat bottom bin, but don’t know which system will be the most effective for your needs? Aeration systems come in several different arrangements and various configurations.

Flat-bottom bin configurations
Flat-bottom bins have several configurations that can be used for aeration. A fully perforated floor, where 100 percent of the floor has louvred or round perforations, is by far the top choice for a natural air-drying floor in flat-bottom bins. These floors provide the maximum open area and least resistance to airflow. Because of this, maximum airflow can be achieved for best results. The fully louvred floor also provides the most uniform distribution of air into the grain mass.

A square or round pit, where only a portion of the inside comprises louvred or perforated flooring, is another option. The outer perimeter of this system is a concrete floor that is flush with the perforated inner portion of the floor. Compared to the full floor, these floors have more limited maximum airflow rates. The uniformity of air distribution also varies. In smaller kernel crops, there is a risk of the air not penetrating the lower portion of the outer ring of grain around the outer perimeter of the bin. Some producers, however, prefer this system, as it concentrates the airflow into the grain mass at the centre of the bin. This allows the air to penetrate the more densely packed centre core of the bin that may not get as much air penetration in a full floor system.

Flush, in-floor tunnel systems have a series of tunnels in the concrete floor that have a louvered top flush with the floor. These patterns can include a straight line, an H, a double D or a Y pattern. These systems are generally used on large bins in commercial terminals or port facilities. The reduced amount of louvred/perforated area limits these systems to aeration only. However, these systems allow themselves to be installed in much taller bins than any other system on the market. Because these systems are only used for the conditioning/cooling of grain, the lack of open area in the floor is not a problem due to the small amounts of airflow involved. Flush in-floor tunnel systems can be found on the farm, but as mentioned earlier, they are limited to aeration only and cannot be used for natural air-drying.

Tube or half round duct systems utilize a tube or duct that lays on the floor in a cross, double cross or Y configuration.

These systems are usually temporary installations that can be removed during the unloading of the bin to facilitate easier cleanout. These systems afford decent aeration should the need arise, but are also limited with regard to airflow. They are not ideal for natural air-drying due to the lack of louvred/perforated surface area and limited pattern layout.

Louvred versus round perforations
In addition to system design, there are several other key factors to consider for maximum performance of your aeration system. A very critical component in maximizing the effectiveness of your system is the type of opening and size. For wheat, oilseed and small kernel storage, a round perforated opening should not be considered. The smaller, roundish kernels will sit right on the round opening and essentially block the entire opening from allowing air through. It is impossible for a round kernel to block off the opening of a long, rectangular louvre.

Floors that will be used for oilseed storage should have a maximum louvre opening height of roughly .035 inch. For cereal grains, a slightly larger opening of .045 inch is sufficient. In any system, the feature of a down-facing opening is preferred, as it tends to collect less debris from flowing grain and cleans out nicer. The use of round perforations is best suited for bins that will hold larger kernels such as pulse crops and corn.

The second critical component of a system is its percentage of open area. Even if there is a large surface area, if the percentage of open area is small, your system will not perform well. Most single-sided louvres range from eight percent to 12 percent open area depending on the opening height of the louvre. Another option is a double-sided louvre that has a 21 percent open area. The key is that for natural air drying at least one square foot of open area is needed for each 1000 cubic feet per minute (cfm) put into the bin.

For example, to dry a 5000-bushel bin at 1 cfm per bushel, 5000 cfm going through the openings is required. In order to accommodate that airflow, five square feet of open area is needed. Let’s assume the louvres have 10 percent open area. The system will need a minimum 50 square feet of total surface area. The most important point to remember here is that without the minimum open area, the aeration system will place static pressure on your fan, limiting its performance. The system has to have enough open area so that the static pressure the fan is working against is that of the grain and not the aeration system.

Cleanliness and uniformity of grain
Air flowing through the grain takes the path of least resistance. If the grain in the bin is filled with debris such as chaff, fines and weed seeds, its density will vary throughout. This will result in non-uniform flow of air through the grain.

Pockets of densely packed grain that cannot be penetrated by the airflow are a problem, and it is only a matter of time until some form of heating starts. For this reason, it is well worth the effort to ensure that grain going into the bin is as clean as possible. This can be done with as simple a process as running the grain through a screening device. Some producers prefer to have the grain spread in the bin as they are loading. The spreader will make the bin somewhat uniform throughout and thus allow uniform airflow in the bin. A word of caution: some producers refrain from spreading such oilseed crops as canola as it may produce a denser packing of the crop in some cases and consequently raise the static pressure in the bin.

Natural air drying/aeration is a simple process and does not need to be complicated. Using these guidelines will help achieve a well-designed and functioning system that provides the best performance when drying/aerating grain.

For further information, got to www.grainguardian.com. 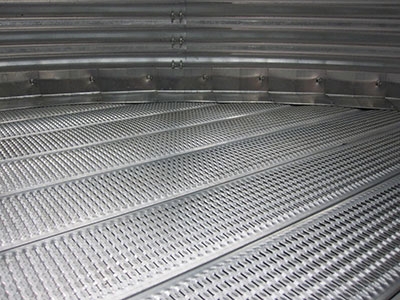 A well-designed aeration system will provide better performance. Tips to consider when looking for an aeration or natural air-drying system for your flat bottom bin.