A problem perennial weed in many cropping systems, Canada thistle, has consistently ranked in the top five weeds in the Canadian Prairies in relative abundance. To optimize perennial broadleaf weed control, herbicide selection and use must be co-ordinated with crop rotations and cropping practices over the long term.

Researchers with Agriculture and Agri-Food Canada (AAFC) at Indian Head, Sask. and the University of Saskatchewan conducted a four-year project to study the effect of herbicide timing and intensity on the control of Canada thistle in a cereal-oilseed-cereal-pulse rotation under a no-till management system. Trials were set up at Indian Head and Saskatoon from 2004 to 2008. The previous cropping system was low-input minimum tillage at all sites. The Canada thistle densities at Indian Head were 40 to 50 Canada thistle plants per square metre in an existing field, and densities at the other sites were slightly lower.

“We used good agronomic practices in all of the treatments in the study, as well as the herbicide treatments,” May says. “Using proper fertilizer rates, earlier seeding dates, good timing of annual weed control applications and good harvest management actually started to lower the counts of Canada thistle every year as we went along, even in the check treatment. Good management practices definitely helped us manage the Canada thistle, although it didn’t mean an automatic yield increase.”

May adds there can be an allelopathic effect of Canada thistle in the crop, so high density of the weed one year can affect a crop’s yield the next year. “As soon as you let off the control of Canada thistle or control was weak, then the Canada thistle started bouncing back fairly quickly,” he notes. “That’s the problem with trying to manage thistle every second or third year in rotation. If you don’t manage it consistently, then the populations sneak back up and take over. The plant can grow back from its extensive root system if it hasn’t been killed completely. Therefore, it takes at least two or three years of a concerted effort to get Canada thistle controlled. Even after four years, Canada thistle populations can start to rebound if control measures stop.”

The results from this study indicate that combinations of in-crop and post-harvest applications of herbicides can be effectively used to control Canada thistle. The control can be successfully initiated in most crops in a rotation sequence, even when a weakly competitive crop like peas are being grown. A consistent approach over several years is required to gain effective control of Canada thistle. 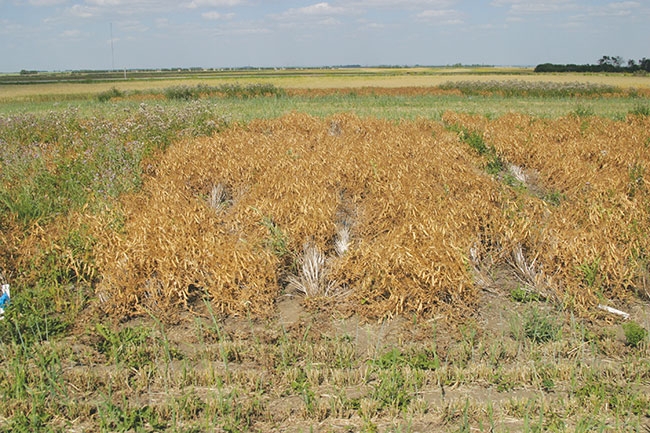 Glyphosate high intensity treatment in year four of the study at Indian Head. A problem perennial weed in many cropping systems