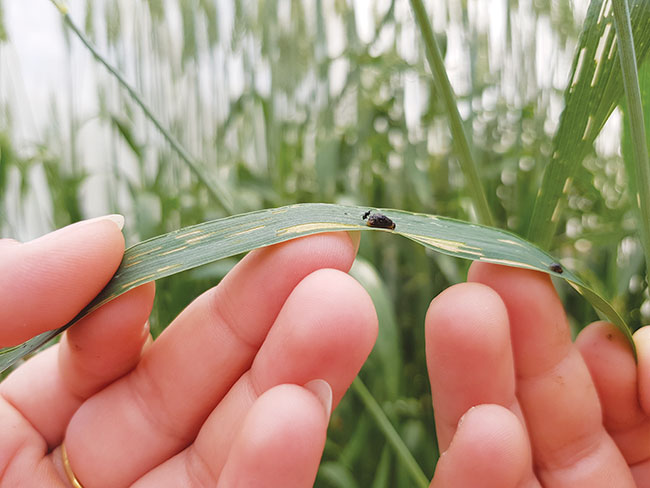 The tiny adult parasitoid wasp T. julis laying its eggs inside a cereal leaf beetle larvae, which has already caused feeding damage. This is a beneficial insect in action. Note how small it is, which makes it almost impossible for an untrained eye to notice this valuable insect in their field. Photo courtesy of Emily Lemke.

Cereal leaf beetle first appeared on the Canadian Prairies in 2005, and researchers have been closely monitoring the pest ever since. Although it is an invasive pest in Europe and has been in Eastern Canada and the southern United States since the 1960s, no western Canadian economic thresholds were available. And it’s not economic to apply chemicals to insects if they are not doing a lot of damage.

“Without more local data for the Canadian Prairies, we had to look to economic thresholds from the southern U.S. for larval feeding levels that cause defoliation and yield loss,” explains Haley Catton, research scientist with Agriculture and Agri-Food Canada in Lethbridge, Alta. “The economic threshold in wheat for the U.S. is 0.4 to 1 larvae per flag leaf, which would be one larvae on four of every 10 flag leaves in the crop. We wanted to develop an economic threshold relevant to western Canadian crops and conditions,” Catton says.

“We also know that natural enemies are important for control of cereal leaf beetle, so understanding the impact of the biocontrol wasp Tetrastichus julis and other generalist predators (such as spiders, lady beetles, carabids and nabid bugs) that eat eggs and larvae in Western Canada was an important component. There are a lot of factors going on and we needed more knowledge to make decisions to make sure we balance controlling the pest while protecting the natural predators and their control benefits.”

In 2016, Catton initiated a three-year project to quantify the effects of cereal leaf beetle and its natural enemies on western Canadian spring wheat. Catton notes that the project was building on the important work her colleague Héctor Cárcamo and his team had previously completed around cereal leaf beetle and the biocontrol wasp T. julis.

“Aphids tended to be more of a problem inside the cages, and we are trying to determine if they interact with cereal leaf beetle on yield impacts. The results of the study confirm that, to date, the economic threshold for cereal leaf beetle on the Canadian Prairies is at least one larva per flag leaf, because at levels lower than this we saw no yield impact,” she adds, noting that in discussion with producers, it seems the insect rarely reaches levels this high in Western Canada.

Cereal leaf beetle feeding damage (with fecal stains) that farmers may notice in the field. Photo courtesy of Haley Catton.

A closeup of a cereal leaf beetle larva, which itself is yellow. However, you can’t see yellow because it covers itself with its own feces for protection; that’s what gives it its “slug-like” appearance. Photo courtesy of Haley Catton.

In the field cage experiment, technicians are using a leaf blower in reverse to remove any insects in the cages before adding cereal leaf beetle larvae for the study. Photo courtesy of Haley Catton.

“Therefore, chemical control of cereal leaf beetle is not necessary at the levels observed and could harm beneficial insects. We also were unable to detect the impacts of T. julis and generalist predators in this study, because pest pressure was low, but we think T. julis is a big reason why cereal leaf beetle has not become a major pest on the Prairies.”

“The problem with documenting a success story like this, is we are still having a challenge trying to collect enough cereal leaf beetle larvae to be able to dissect and determine parasitoid levels,” she adds.

Catton and her team are asking growers to collect and send cereal leaf beetle larvae samples. “This will help us better understand the parasitoid, and we will also provide information back to growers about the levels in their fields. If we don’t find any parasitoids, we may be able to provide T. julis to growers for their fields to help increase their population.” If you have samples, contact Catton via email: haley.catton@canada.ca or by phone: 403-317-3404.

The economic threshold project is now completed, but Catton is working on a new project focused on T. julis. The project is being conducted in greenhouse experiments to better understand the relationship and impacts of the pest and the parasitoid.

The most important message from the study, Catton emphasizes, is that, in most cases, cereal leaf beetle is not causing economic damage to crops at the levels found in fields, so chemical spraying is not needed.