Gross is one of five agronomists working on the Prairies for DUC. His 1989 master’s thesis was on winter wheat. For the past 25 years with DUC, Gross has coordinated and promoted winter wheat, forage and grazing initiatives.

He says the website, growwinterwheat.ca, is the best place to learn about winter wheat. The website, operated by the Western Winter Wheat Initiative (WWWI) and launched in January 2014, is a collaboration between Bayer CropScience, Richardson International and Ducks Unlimited Canada. It was developed as a one-stop shop for all the information that’s needed by growers, from agronomy, to varieties recommended, to the decision-making tools that are needed. For instance, it includes a planner that shows when to plant canola in spring so that the field can be harvested and ready to plant winter wheat at the right time (ideally between Aug. 20 and Sept. 7).

Economic case
Winter wheat provides excellent nesting cover for waterfowl and, although it is well known, it is often overlooked as a crop option, Gross says. It’s had three troubled years back-to-back, leading to a decline in seeded acres. In 2015, winter wheat had fewer acres than soybeans in Manitoba. In fact, the Manitoba winter wheat crop came off in August at only about 250,000 acres.

At that time, markets, too, were paying more for hard red spring wheat. Viterra was paying about $6.30 a bushel for spring wheat this fall in Saskatchewan and, at the same location, only about $5.25 for winter wheat. So, why bother?

Gross maintains although it’s a lower price per bushel, it offers a better return per acre. And the input costs are lower for winter wheat, so the net result is seriously in favour of winter wheat.

“If you multiply price by average yield, there’s a yield advantage for winter wheat of $20 an acre this fall. It’s a lower price, but that significantly higher yield more than offsets the price,” Gross says.

Input costs also favour the winter wheat grower. Gross uses the Manitoba Crop Production Guide to check those costs. “Winter wheat tends to have a little lower cost of production than spring wheat. Primarily that’s because you don’t need a herbicide in spring to control or kill wild oats. On their worksheet, that’s a benefit of about $16.50 favouring winter wheat,” he says.

The total cost for putting in an acre of winter wheat, including seed, seed treatment, fertilizer, herbicides, fungicides, insecticides, operating costs and all the rest, the guide projects, is about $13 an acre less for winter wheat. Now, the economic case favours winter wheat in Manitoba by about $33 an acre.

Indeed, Gross and supporters of the WWWI believe the crop has potential to reach four million acres of production in Western Canada. “In provincial crop production guides, it tends to be in the top three crops for profitability. That’s why the producers who do grow it put it in the ground. You hear this again and again, it’s their most profitable cereal crop and one of their most profitable crops,” Gross says.

One reason is yield, which has been increasing for the past 10 years. Over the past five years, average Manitoba winter wheat crops have out-yielded spring wheat by 40 per cent. Statistics Canada yield estimates for October stated the Prairie-wide yield advantage for winter wheat was 11 to 30 per cent more than spring wheat. It confirmed what Gross already knew.

“That’s right in line with what we’ve seen historically,” he says, adding that the yield target for growers in Manitoba is a 100 bu/ac winter wheat crop.

“That’s the goal. One of my producers in the Killarney area had 85 bushels this year, and they’ve hit 100 bushels a number of times. You have to utilize the right agronomic practices and get a little good weather, but I’ve seen it happen,” he says.

He adds, “I worked this summer with one producer (in the Palliser region) who had a very nice looking crop, but they only got 60 per cent of normal precipitation. He was still able to pull off a 50 bushel winter wheat crop. That was disappointing for him, because he was targeting for a 100 bushel crop. We usually end up with 70 to 80 bushel crops in that area.”

Better timing
Timing is very important in the farming business. “The primary driver for farmers is profitability, but timing is a big deal, too,” Gross says. “I’ve heard a lot about stress the last couple years. We had a couple wet springs, where guys couldn’t get on the land to get anything seeded.

“Having winter wheat in the ground in the fall meant those growers had less stress in spring. They felt good that they had at least a third of their acres seeded down to winter wheat. That is very important to producers.”

Although it’s too late to put winter wheat in the ground in December, now is the perfect timing for planning. “You have to start planning that right about now,” Gross says. “You need to plan which field you will use for planting winter wheat into next fall. Usually, winter wheat is put in on canola stubble. You have to plan on getting some canola into the ground early, so the land is suited for winter wheat to follow.”

Agronomics
When it comes to agronomy, winter wheat varieties have improved quite a bit. The most significant improvement is resistance to Fusarium graminearum.

“A variety called Emerson is dominating the acres in Manitoba. It’s got very good resistance to Fusarium,” Gross says. “Producers had a bad Fusarium year in 2014. I think the provincial average for the Manitoba winter wheat crop was 4.5 per cent Fusarium, which is pretty poor for winter wheat, but the Emerson showed only 0.5 per cent. That’s pretty significant.”

Keys to the package of higher yields are seeding rates and fertility. Gross pushes for more of both. “To maximize profitability, you need a uniform crop, and that starts with a high seeding rate,” Gross says. “We have a seed rate calculator on our web page. You have to consider the thousand-kernel weight and survival rate. The crop production guide targets 23 plants per square foot, but our research shows you’re better off to target more than 30 plants per square foot.”

Seed heads are more uniform and plants have fewer tillers, if the crop is a little thicker. That leads to uniform flowering and easier timing for foliar fungicide. The more uniform your stand, the better it is, he says.

Yield potential also relies on nitrogen availability. “It will out-yield your spring wheat in Manitoba by upwards of 40 per cent or more but you have to add a little more nitrogen to do that. Whatever your nitrogen rate is for spring wheat, add 10 to 20 per cent more to boost those winter wheat yields by 40 per cent. The nitrogen to grow those kernels has to be available. It’s a whole package,” he says.

Winterkill potential always exists for a fall-seeded Prairie crop. Overall, he says, the nine per cent rate of annual winterkill is no different than it is in Kansas.

Reason for optimism
Members of the Western Winter Wheat Initiative have a goal of reaching two million seeded acres in a few years, and then doubling it. “Our first goal is to reach two million acres. After that, we think once we get to four million acres, the markets and everything else will fall into place very nicely,” Gross says.

There’s a market to support it, if other things fall in place. “International customers are very excited about winter wheat potential,” he adds. “It has nice bright flour that’s perfect for products other than bread. It’s perfect for steam buns. Millions of those are eaten every day, but we have to produce enough winter wheat so that they can have a consistent supply. If we have the supply, then the terminals would be more interested in marketing it.” 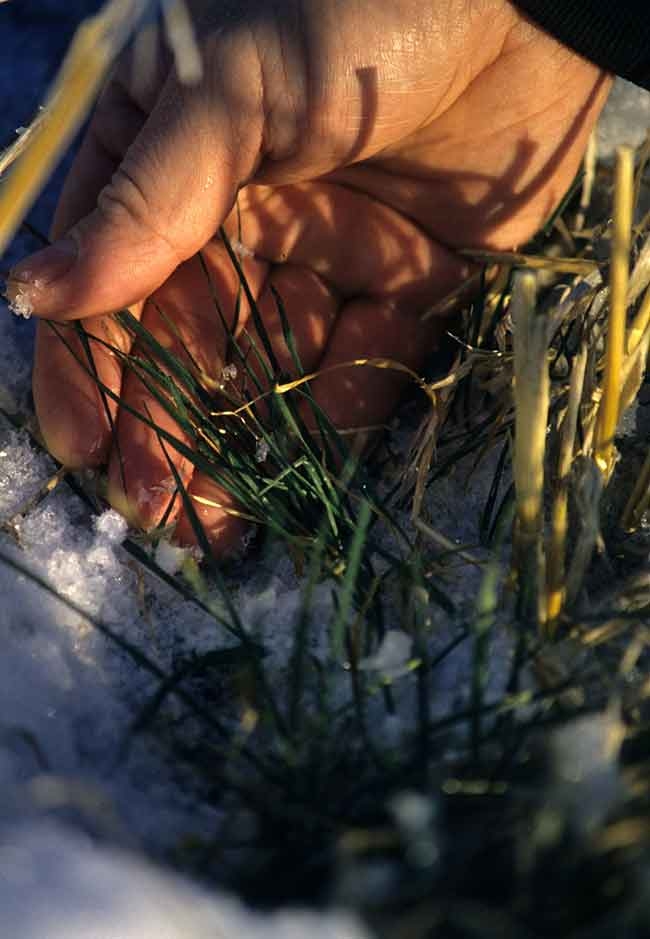