Root and photosynthesis traits that help maintain yields despite these stresses. 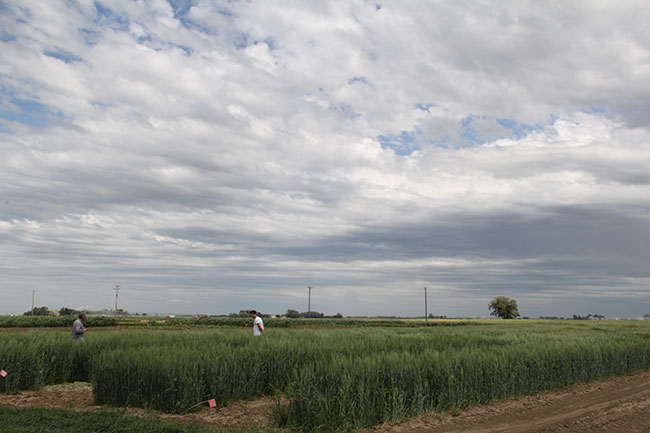 Selvaraj (left) and Hamid Shaterian (right) evaluating the traits of the different durum lines in the field. Photo courtesy of Paula Ashe, NRC.

Drought and heat already take their toll on Prairie crop yields. A future where that toll could become much higher is a gut-wrenching thought.

“Climate models predict the wheat-growing belt in the Prairie provinces – particularly in southern Alberta and Saskatchewan, where much of the durum is cultivated – will get hotter and face drought conditions,” says Gopalan Selvaraj, a principal research officer with the National Research Council of Canada in Saskatoon.

Selvaraj and his research group recently completed a project looking at the genetic underpinnings of drought- and heat-tolerant root and photosynthesis traits in durum wheat. Their findings are a step forward in helping durum breeders efficiently move these traits into their breeding lines.

The longer-term goal of Selvaraj’s research is to develop molecular markers for the drought- and heat-tolerant traits. Breeders can use such markers to quickly screen breeding materials in the lab, instead of having to grow the seeds into plants and assess them for the desired traits. Markers are especially helpful when screening for traits like root characteristics that would otherwise require labour-intensive, time-consuming measurements.

Drought and heat: a double whammy
Selvaraj points out that drought and excessive heat limit crop yields more than all other crop stresses. He explains that the lack of water impairs a long list of vital functions that water performs in plants. Plants are about 90 per cent water, so water is part of a plant’s structure. Water is the medium in which most biochemical reactions happen in plants, and it is key to photosynthesis and cell growth. Water transports dissolved soil nutrients into the plant and transfers the sugars made by photosynthesis to different parts of the plant. Water is slow to heat and cool, so it buffers the plant against temperature changes, and it also helps cool the plant through evapotranspiration.

“Excessive heat reduces yields; some studies estimate as much as six per cent yield reduction for every Celsius degree above a plant’s upper limit [for heat tolerance]. It can be a silent killer when it occurs at a sensitive point like flowering,” he notes.

“Also, heat makes drought worse, and drought exacerbates the ill effects of heat. If there is no water, the temperature will go up inside the plant cells and cellular function will come to a halt.”

A tale of two cultivars
To investigate the genetic underpinnings of a trait, researchers can create a genetic map – a map of chromosomes and genes – using contrasting breeding lines that differ in that trait. The researchers then map the trait onto the genetic map to look for genes associated with the trait and develop markers for those genes.

Selvaraj’s project contrasted two pivotal durum varieties – Pelissier and Strongfield – and a set of lines made by crossing these two varieties. “Pelissier comes from Algeria. It was brought into the U.S. about 120 years ago and then into Canada [in 1929]. It was used in Canada as a variety because it had superior grain protein strength for pasta,” Selvaraj says. Pelissier was grown on the Prairies for many decades, and Canadian durum breeders used it as a founder parent. Pelissier performs well under hot, dry conditions – not surprising, given its North African origins.

Strongfield was bred by Dr. John Clarke at Agriculture and Agri-Food Canada’s Swift Current research centre and released in 2004. This variety was the first commercially successful Canadian durum variety with low cadmium levels, an important issue for export markets. “Strongfield is one of the most successful varieties in Canadian durum history and cumulatively it probably has had the largest acreage,” Selvaraj says. “Many subsequent durum varieties have Strongfield in their pedigree.”

The project’s work with Pelissier was built on foundations laid by some earlier Prairie researchers. Galvanized by severe droughts in the 1930s and early 1960s, those researchers tackled the challenge of investigating root characteristics in wheat to help in developing drought-tolerant varieties. “In the 1930s, scientists in Alberta compared the root systems of a number of different wheat varieties. They found that Pelissier had much more root biomass than non-drought-resistant varieties,” he notes.

“In the 1960s, Dr. Edwin Hurd, a durum breeder at the Swift Current centre, did outstanding, pioneering work in the world on drought tolerance in wheat, or any crop system for that matter, from a breeding perspective. He confirmed that Pelissier did indeed have a greater root biomass.

“He also crossed Pelissier with a drought-sensitive durum variety and then simply looked for yield improvement – not root characteristics – in the hundreds of progeny. In the early 1970s, he released two varieties from that work. Both varieties turned out to have extensive root systems just like Pelissier.” In other words, selecting for high yields under dry conditions also selected for larger root systems.

Hurd reasoned that drought-tolerant varieties not only need a deep, extensive root system that can seek out and retrieve water under dry conditions; those varieties must also be able to use this water to drive photosynthesis under moisture-stress conditions so they can sustain their yield potential.

Selvaraj adds, “After those two varieties were released in the early 1970s, there was no directed effort to use root traits from Pelissier [to develop drought-tolerant varieties]. Breeders do their selections over time, in wet years or dry years. Unless one makes the selections only in dry years, drought-tolerance traits can be lost.”

Based on Hurd’s work, Selvaraj’s group selected Pelissier for their project’s example of a drought-tolerant variety with a deep, extensive root system. Strongfield made a good contrasting line because it had about half the root biomass of Pelissier in greenhouse trials under well-watered conditions.

The researchers were able to augment the genetic contrast of Pelissier and Strongfield with a set of lines made by crossing these two varieties. “Scientists at the Swift Current research centre had already crossed Pelissier and Strongfield and created 167 lines using a protocol called doubled haploidy. They kindly allowed us to use those lines in our research.” Each doubled haploid line is genetically distinct from the other 166 lines, and each line breeds true.

Mapping the traits
Selvaraj’s group measured the root and photosynthesis traits of the different lines so they could map those traits on the genetic map.

Regarding the root traits, they found that Pelissier and Strongfield have about the same amount of root mass in the plants’ early growth stages. However, Pelissier then makes a massive investment of photosynthate in root development just before or right at the time of flowering.

Selvaraj speculates that Pelissier’s root growth pattern could be advantageous in typical Prairie growing conditions. “Moisture availability is generally not a problem early in the growing season, but hot, dry weather often strikes around flowering time or later.” So Pelissier waits to invest a lot of energy into root growth until the plant will most likely need to start accessing water remaining deeper in the soil.

The researchers have mapped the genomic regions associated with deep, extensive root systems and with superior photosynthesis capacity under hot and dry conditions.

Their work so far has resulted in some lower resolution markers. Selvaraj notes, “Those markers tend to fall at very large intervals along the chromosome. Between one marker and the next there may be as many as 1000 genes.” That is far too many candidate genes to find an association between a specific gene and the trait of interest.

He outlines one of the issues causing these large intervals: “Pelissier has been used several times in the pedigree of Strongfield. As a result, chunks of Pelissier are already in Strongfield and that limits the number of markers you can find when you try to map Strongfield versus Pelissier.”

The next stage of this research will focus on reducing the intervals between markers. That way the researchers will have fewer candidate genes, making it easier to figure out which particular ones are controlling the traits of interest.

According to Selvaraj, multiple strategies are available to develop such higher resolution markers, but all are resource- and time-intensive.

This project has provided more information on Pelissier as a useful source of genes for an extensive root system with well-timed root growth, and for heat- and drought-tolerant photosynthesis. The researchers have also identified some doubled haploid lines with potentially interesting traits.

In the longer term, the genetics and genomics knowledge gained from this research will help to advance durum breeding so growers can be better prepared for a drier, hotter future. The research findings can also be applied to breeding other types of wheat.

Selvaraj emphasizes the importance of developing varieties that can tolerate dry, hot weather. “It is essential for wheat yields to be maintained or at least not reduced too much under dry conditions. Even in years where growing conditions are good across most of the Prairies, there are always places where a moisture deficit occurs. That moisture deficit causes economic hardship for the affected farmers. Then in some years, widespread drought impacts many farmers in many areas. And then the climate models say the southern Prairies will get hotter and drier, so these stress factors are likely to become worse in the years to come.”

Selvaraj notes that two people in his research group, Paula Ashe and Hamid Shaterian, deserve special recognition for their work on this project. The project’s funders included the Saskatchewan Wheat Development Commission, the Saskatchewan Ministry of Agriculture, the Alberta Wheat Commission, and the National Research Council of Canada.


Related
Upping durum’s dry down game
From the Editor: Digging deep in a difficult year
Next-generation technologies for tomorrow’s crops
Getting to the heart of durum wheat physiology