There isn’t a need to hit the panic button, but keep an eye on downy mildew. Caused by the fungus Peronospora viciae, downy mildew likes cool, wet conditions, so it hasn’t tended to be a significant issue on the Prairies. But in the last few years, pea growers in some parts of Alberta and Saskatchewan have been noticing downy mildew in their crops. Occasionally these infestations have been severe, with devastating impacts on pea yields. At present, practices for managing this disease are limited, but Alberta researchers are hoping to find some more options.

“In Alberta, we started seeing downy mildew in random pea fields about five or six years ago. At first it was very sporadic, but now we’re starting to see it more and more. The last two summers in Alberta were quite wet and quite cool. In the areas that seemed to be just a little wetter and a little cooler, we saw lots of downy mildew. But in drier areas, like in southern Alberta, we saw very little to none,” says Robyne Bowness, pulse research and extension technologist with Alberta Agriculture and Rural Development.

“In Saskatchewan, downy mildew hasn’t caused severe issues. It tends to show up from time to time, which tells us that the pathogen is present, waiting in the soil for just the right conditions to cause the disease,” says Faye Dokken-Bouchard, provincial plant disease specialist with the Saskatchewan Ministry of Agriculture. “We saw a bit more of it in 2009, when it was present in about 30 percent of the pea crops that we surveyed.” In a few of the affected fields, the surveyors found some severely infected patches with stunted plants covered with mildew. Despite the wet weather in 2010, the Saskatchewan disease survey found only low levels of downy mildew that year. In 2011, Saskatchewan didn’t do a formal survey, but Dokken-Bouchard thinks the downy mildew levels were about the same as in 2010.

Bowness notes, “Downy mildew can be quite sporadic even within a field; you might find a big patch of it and then a few hundred metres away you’ll find none. And then if you drive down the road, you might find a field that is covered with the disease. It’s a very unpredictable disease.”

When scouting for diseases in your pea crop, you can keep an eye out for downy mildew, especially if the conditions are cool and moist. Dokken-Bouchard says, “For early symptoms of the disease, the main thing to look for is a fluffy, grey mould growing on the lower surface of the leaves. And on the corresponding upper surface of the leaves, you can see areas of chlorosis, or yellowing.”

“When the disease is more severe, you’ll see symptoms of a systemic infection, including stunting of the plants and discoloration of the leaves, in addition to mouldy growth occurring all over the plant,” says Dokken-Bouchard. Downy mildew can infect the pea flowers, causing floral sterility, and the pods, reducing seed size and quality. A moderately severe infection can significantly reduce the number of pods, seed size, seed quality and yield.

It’s unusual to get really severe downy mildew infestations in peas. Bowness says, “I have seen downy mildew completely wipe out a field, but I have only ever seen that a couple of times.” She says it’s much more typical for the disease to start during the cooler, moister weather that tends to occur in June in central Alberta. Then, when warmer, drier weather arrives in July, the disease tapers off before it does much damage to the pea crop.

Looking for answers
The severe infestations that occurred about five years ago in Alberta prompted researchers at Alberta Agriculture and Rural Development and the University of Alberta to start investigating downy mildew in peas through greenhouse, growth chamber and field studies. They are carrying out a lot of their field research in the area along Highway 16 running east from Edmonton to Vegreville because that area seems to be especially prone to the disease.

Since downy mildew is a relatively new disease issue for Alberta, the researchers are trying to get a better understanding of the disease itself, as well as basic disease management information, such as the susceptibility of a wide range of pea cultivars; the effects of different seed treatments; foliar fungicides; and seeding dates, rates and depths.

So far, the researchers have determined that the overwintering, or resting, spores of downy mildew can persist in the soil for at least five years. They have found that optimum conditions for germination and infection of the fungus are temperatures between 8 and 10 degrees C and relative humidity greater than 90 percent for over 12 hours. “If those conditions aren’t met, the spores don’t remain viable for very long. If it’s 20 degrees C, the spores will only live for about 24 hours and then they’ll die. As a result, when you have a hot, dry year, downy mildew won’t be a problem,” explains Bowness.

The research results to date indicate that seeding shallower or deeper than the usual seeding depth doesn’t help control the disease nor does changing the seeding rate. In terms of the cultivar evaluation results so far, Bowness says, “None of the commonly used registered pea varieties got hit really hard by the disease in our plots. But CDC Midas does seem to be quite susceptible.”
The results suggest that fungicides are likely the best control option. No seed treatments are currently registered for control of downy mildew in peas, but a minor use registration was recently granted for the foliar fungicide Headline. Dokken-Bouchard recommends considering a foliar application if you have observed early symptoms of the disease and if cool, rainy conditions occur as the crop begins to flower.

As well, practices for reducing the risk of any type of pea disease will also help control downy mildew. Those practices include: using good-quality, disease-free seed; seeding early; and rotating your crops. Dokken-Bouchard says, “Although crop rotation is always important, the downy mildew spores can survive in the soil in the absence of a host for several years. ” Bowness also suggests that, if you have a downy mildew infestation in a field, you should clean the soil and crop residue from your equipment before going to the next field. 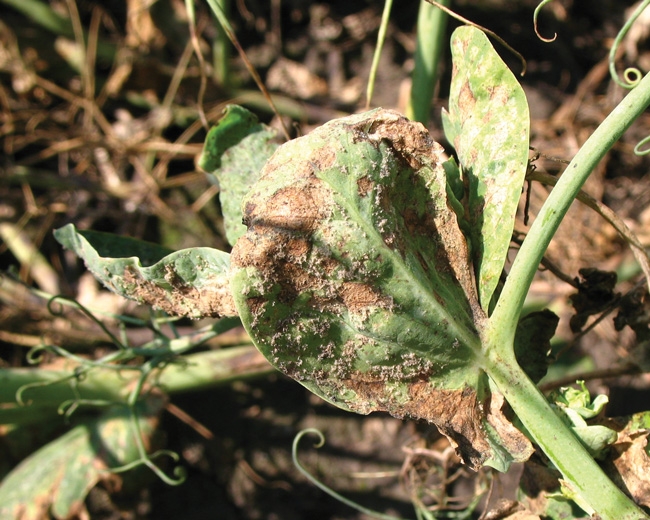