In 2012, to address forage shortages caused by a dry summer, many farmers turned to double-cropped forages following winter wheat, the practice of planting two forage crops in the same season. Overall, the experience was positive but questions remained, according to Bill Deen, an associate professor at the University of Guelph and the lead of the project. So began a research project to look more closely at the agronomics and nutritional aspects of double-cropped forages following a winter wheat harvest.

The project was co-funded by the Beef Farmers of Ontario, the Ontario Forage Council via the Farm Innovation Program, the Agricultural Adaptation Council, the Ontario Soil and Crop Improvement Association and the University of Guelph and Ontario Ministry of Agriculture, Food and Rural Affairs partnership. The project was initiated following the 2012 season, when drought caused a shortage of forage.

Findings
The trials were planted at the Elora and Woodstock research stations and 12 farm sites throughout southern Ontario in no-till, dry soils in early August during the 2012, 2013 and 2014 seasons. Over the three seasons, the researchers collected data on yield, moisture, nutrient (phosphorus and potassium) and nutritional quality and had approximately 400 samples analyzed by using wet chemistry to determine a complete range of nutritional parameters and nutrient removal rates.

The results indicate oats forage (or an oat-and-pea mixture, if higher protein forage is required) were the best crops for fall-harvested cereal forage. “Good establishment and growth occurred more consistently for oats resulting in higher and less variable forage yields compared to either barley or triticale,” Deen says. “However, from a forage quality perspective, there was little difference between oat, barley and triticale forages.”

The researchers also found double-cropped spring cereal forages harvested in the fall have consistently good nutritional quality. “Total digestible nutrient concentrations were similar for barley, oats and an oat-and-pea mixture forages,” Deen says. He adds, with the 2014 trials that included triticale, total digestible nutrient concentrations for triticale were similar to oats or barley.

Another finding was that including peas as a mixture with a cereal will increase forage crude protein, although adding peas does not significantly affect yield or total digestible nutrient concentration of cereal forages.

“Crude protein concentrations for an oat-and-pea mixture forage averaged 2.7 per cent higher than pure oat forage,” Deen says. “Including peas in a spring cereal forage is of benefit only if a forage with higher crude protein is required.”

In 2012, the trials were planted in early August in no-till, dry soils with rainfall occurring about one week following planting. These trials indicate high fall cereal forage yields are possible even when the spring and early summer are unusually dry.

“Plant the cereal forage as soon as possible following wheat harvest,” he says. “Cereal forage yields are increased by additional August growing days, which cannot be made up for by delaying fall harvest dates. Plant even if the soil is dry because the forage crop will get off to an earlier start when the rains finally arrive. Yield is based on timely planting following winter wheat.”

Dean advises planting cereal forages in no-till to preserve soil moisture, and keeping stubble heights low and straw baled to reduce the amount of straw in the cereal forage. If applying
liquid manure, Deen says producers should consider applying the manure, incorporating it into the soil and then planting their cereal forage as soon as possible.

“The moisture provided by the liquid manure, if the cereal forage is planted soon after application, may assist in quick emergence when planted into drier soils,” he says.

As for inputs, the research shows it is best to top dress 50 to 70 kilograms of nitrogen per hectare (kg N/ha) after successful emergence of the cereal crop has occurred. This is because the previous wheat crop depletes the soil nitrogen and additional nitrogen will be needed to ensure high cereal forage yields. Applying 50 to 70 kg N/ha increased oat forage yields, on average, by 70 per cent and crude protein by 0.6 per cent. Even when planted with peas, oats still require additional nitrogen, so Deen recommends applying nitrogen if planting oat and pea mixtures.

“On average, applying nitrogen increased oat and pea forage yields by 30 per cent and crude protein by 1.2 per cent,” he says. “If manure is applied, fertilizer nitrogen rates should be adjusted to account for the available nitrogen provided by the manure.”

Once established and growing, foliar disease, particularly rust, could become an issue so Deen recommends, if possible, planting oat varieties with high resistance to rust. Producers should also scout their crops and consider applying fungicide if they see rust.

As for harvest, cereal forage should be harvested by mid to late October.

“Forage yield gains by delaying harvests much beyond mid-October are small and the drying opportunities needed to make good quality silage or hay diminish quickly after mid-October,” Deen says. “Moisture content of flag to boot stage cereals is about 80 per cent and some in-field dry-down period will be required to reduce moisture content.”

Added value
Double-cropped forages add further value to inclusion of wheat in the rotation – something that really appeals to Deen.

“A lot of farmers think if they grow wheat, they should not bale the straw, but a corn-soybean-wheat rotation with the straw removed is still better for the soil than just a corn-soybean rotation,” he says. “Remove the straw, plant double-cropped forage and farmers can be confident soil quality is being improved.

“If they put in a cover crop and don’t harvest it, it’s good for the soil, but if they do [harvest it], it’s still good. It adds more value to the wheat system.” 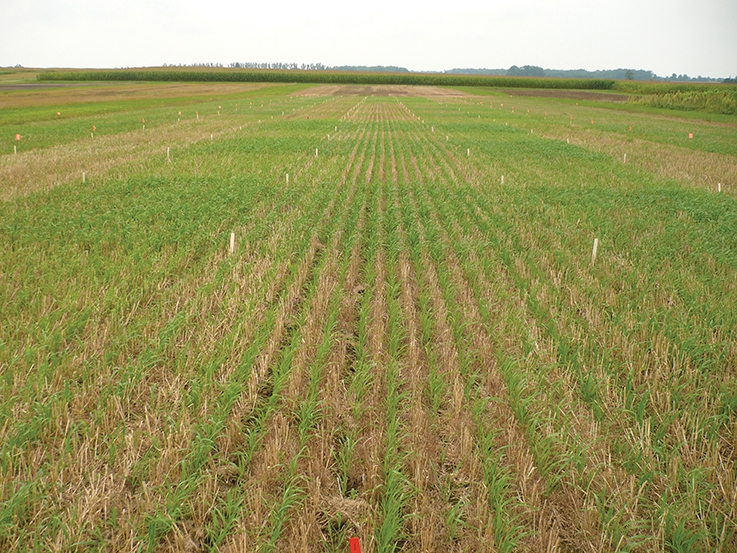 Different cover crops and nitrogen rates were used on plots for a three-year research project at the University of Guelph examining the agronomics and nutritional aspects of double-cropped forages following a winter wheat harvest.