Don't grow specialty peas without a production contract. That's the advice repeated by everyone involved in niche market peas. 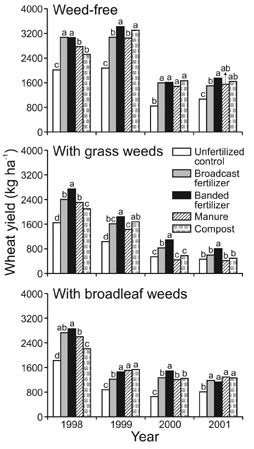 Niche market peas may look attractive, but grow them only with a marketing
contract that gives you a premium for extra effort and lower yields. Global
supply and demand is finely balanced and prices can shift dramatically. Quality
criteria can also lead to marketing difficulties.

Several types of specialty peas grow fairly well on the prairies, but they
are either more challenging than traditional types or markets are very volatile.
Alberta Agriculture pulse specialists, Mark Olson and Ken Lopetinsky have tested
more than 20 specialty pea varieties at several sites in central and northern
Alberta over five years. The experience has not convinced them of the potential
for these varieties. Even Cebeco Seed Innovation, which owns the worldwide rights
to several niche varieties, is dubious about their potential.

"Many specialty types take extra effort to harvest the quality that is
required in their niche market," says Olson. "Do your homework before
you seed peas for a niche market. You need a premium to cover the extra work
and risk."

In Olson's trials, varieties for niche markets were taller and more prone to
lodging than Espace, the check variety, or Integra. Only U30 orange peas matched
Espace in yield and standability. Orange peas also grow well under irrigation
in southern Alberta, according to Jörg Klempnauer. The Grassy Lake, Alberta,
farmer figured his orange peas out-yielded green or yellow varieties by 20 or
30 percent under irrigation, but he had difficulty marketing them as a substitute
for red lentils.

"We could probably sell orange peas if there were no red lentils available,"
Klempnauer says. "But then we'd be displacing our own crop. And, it's always
difficult to sell people a substitute for a food they're used to buying."

Wes Walker of Walker Seeds in Tisdale, Saskatchewan, agrees. His company sent
samples of orange peas to a long list of buyers in several countries a few years
ago and thought they had found some markets. "There may still be some potential,"
he says. "But when you try to take these products to a commercial scale,
costs, for the exporter and the importer, are very high.

"For example, the cost of shutting down and thoroughly cleaning a splitting
plant to run orange peas can be too great for small volume. On the importing
side, retail development – negotiating new supply agreements with supermarkets
for shelf space – can be too costly for a small volume crop," explains
Walker. "When we figured in the cost of shutting down our splitter and
cleaning it out to run orange peas, it just wasn't economically viable. We thought
we had good margins, but they weren't there when we tried to build up to commercial
scale."

Yields and market demand varies among pea types
Some varieties did spectacularly well in some years at some sites in the Alberta
Agriculture study. For example, the maple pea, CDC Acer, yielded 30 percent
more than Espace at Three Hills in 2003. Although it averaged eight percent
better than the green check variety in 2003, in 2001, CDC Acer yielded 12 percent
less than Espace.

Yield is not everything
Markets for maple peas have taken a dive lately and are not expected to recover
for a while. These peas are exported to Asia for poultry feed and to Europe
as feed for racing pigeons. "It's a very sensitive market," says Walker.
"We used to sell the production from about 10,000 acres. But a lot of things
are against us right now. In Asia, our maples compete against Chinese mah peas,
which have been very cheap in the last few years. And, avian flu has decimated
poultry flocks in Asia, cutting demand for feed."

Walker goes on to say that in 2004, Europe had a big crop of pigeon peas. Pigeon
fanciers are very demanding in their quality criteria and Acer is a smaller
pea than they like. The small size made Acer attractive to farmers, especially
as maple prices in 2003 were high. Saskatchewan farmers grew about 12,000 acres
of Acer in 2004. Those excess peas depress markets for other birdseed types
and they cannot go into the feed market, the maximum for maple peas in feed
is five percent, because of their high tannins.

Marrowfat peas did not yield well at Olson's sites. Yields were half to a third
lower than Espace.

"Marrowfats need a little more management and dedication than green or
yellow peas," says Klempnauer. "You have to treat them more like a
bean and be very careful to seed them without cracking the seed coat. Then,
you need good weed control and a fungicide to control powdery mildew."

Through his Columbia Seed Company, Klempnauer contracts marrowfat peas for
Asian snack food, but prices he can pay growers are falling. Returns from Asian
contracts have dropped 15 to 20 percent as the US dollar has lost value, and
freight rates have doubled in the last couple of years. Klempnauer is planning
to process marrowfat peas for snack food in Canada.

"Niche markets are all about timing," says Klempnauer. "If you
have the right variety and quality at the right time, you can dictate your price.
Other times, you take what you can get." -30