Symptoms can pass for drought damage or early senescence. 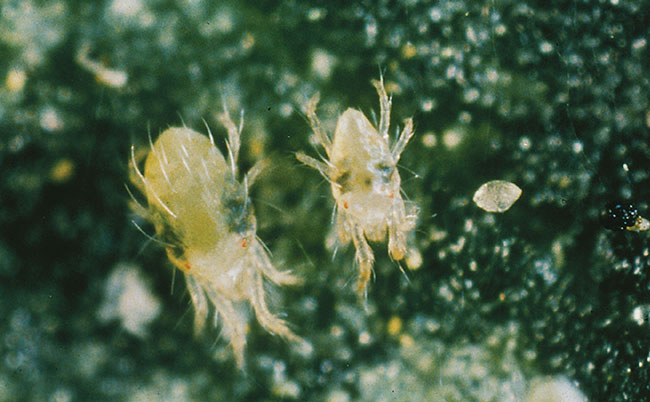 A close-up photo of a two-spotted spider mite. Photo courtesy of Tracey Baute.

Two-spotted spider mites (Tetranychus urticae Koch) are small – very small, at one fiftieth of an inch or so in length – but mighty.

If conditions are right and they get to work in the early R stages of soybean development, spider mites can cause 40- to 60- per cent yield loss, says Tracey Baute, field crop entomologist for the Ontario Ministry of Agriculture, Food and Rural Affairs (OMAFRA).

But they’re so small that they can go unnoticed. “They’re tiny and almost transparent,” Baute says. “You can see them, but they’re tiny dots. We usually suggest people take leaves and shake over a white or black piece of paper to see their movement.”

It’s easy to mistake the symptoms of a spider mite infestation for drought symptoms: over time, the leaves show a stippling pattern – like they’ve been sandblasted, Baute says – with fine webbing underneath the leaves, “almost like it’s defoliating or getting ready for fall.” Left unchecked, the mites kill the plant and move to another host.

Over the last few years, with higher-than-average temperatures, spider mites have become more of an issue for Ontario producers. There are a few “hot spots” that have problems with spider mites almost every year, Baute says. But this year, even though conditions weren’t ideal for mites, researchers still found them in some fields. “It’s something to pay attention to going forward,” she adds.

Two-spotted spider mites are pests of many crops, including horticulture crops, dry beans, soybeans and wheat, and can be tricky to manage for that reason. After one host crop is harvested, they “balloon” to another host on fine webbing. Ontario researchers have noticed a trend whereby spider mites will balloon from cereal and grass crops after harvest to other hosts, including soybeans.

There’s only one chemical mode of action registered for use on spider mites in soybean in Ontario: dimethoate, an organophosphate sold under the trade names Lagon and Cygon that works by disabling a critical enzyme in the mite’s nervous system. Additional modes of action are available for high-value horticulture crops, but are sold at a price range that isn’t economical for field crop producers. Dimethoate has been used for decades, Baute says, and its efficacy could be waning.

OMAFRA has partnered with Western University and Agriculture and Agri-Food Canada on a spider mite monitoring project. This past growing season, 10 to 12 populations collected from farms ranging from Grey County to the Chatham-Kent area were analyzed at Western, and all were discovered to be resistant to dimethoate.

Management
Because dimethoate is the only chemistry registered for use in soybeans and dry beans, Baute says there’s a high need for spider mite population testing to determine whether resistance is widespread and the registration of new control agents should be expedited.

The latter isn’t a simple task. Baute says the industry has been pushing for the registration of a second mode of action in soybean for years. The end product would need to be cost-effective for field crop producers. Alternative products in use in horticulture crops can set producers back $50/acre or more, which is cost-prohibitive even if the alternative results in major yield losses.

While testing existing products for use in soybean, researchers need to evaluate application rates to ensure resistance doesn’t develop.

“On top of that, part of this project is looking at testing mite populations on other products. If they’re already tolerant, there’s no point in getting them registered,” she says.

Faced with such a challenging pest – so tiny it can easily be mistaken for drought stress, with the ability to quickly navigate from host to host, and increasingly resistant to the only product available to control it – producers may wonder what can be done to manage it.

Crop rotations can help, Baute says. “You do see more spider mite infestations in areas that are more abundant with soybeans or dry beans, but even if [producers rotate out of soybeans], they’re still present nearby in cereals and grassy ditch banks, and will balloon into any soybeans in the area.”

Spider mites tend to start at the field edges, she adds, so spraying at field margins could be an option as long as resistance hasn’t developed.

Producers’ best bet is to plant early so soybean plants are past the R3 stage by the time spider mites zero in on the crop. “There aren’t many cultural practices to keep the infestations down – it’s a matter of making sure your plants are as stress-free as possible and maybe more advanced when infestations happen,” she says.

If they continue to have issues with the pest, they may need to rotate out of beans and dry beans for a few years until other products are registered.

For now, producers should consider submitting mite population samples for analysis. Baute recommends sampling before an insecticide application is made, or after an application has been made and spider mites continue to be a problem in the field. OMAFRA staff will visit the farm to collect samples, she says.

Baute’s goal is to have a new infographic tool with information on spider mite identification and dimethoate resistance ready for the 2022 growing season. The resistance project will also include an app for farmers to identify fields with spider mite problems and notify Western University that a sample should be taken.

“We’re trying to build some resources and tools,” she says.

To notify Baute of fields with spider mite populations to take samples for testing, producers can contact her at tracey.baute@ontario.ca or 519-360-7817.