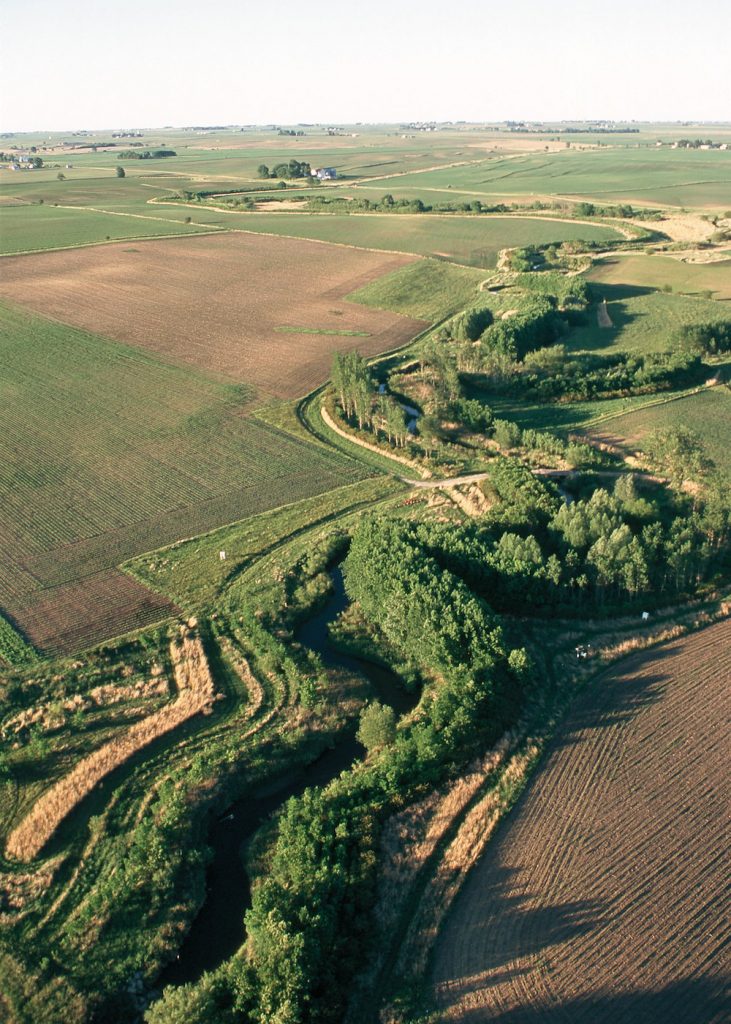 New research suggests that vegetated buffer strips may not be very efficient at filtering contaminants from runoff in cooler climates, such as Canada. Photo by USDA Natural Resources Conservation Service.

A new publication suggests vegetated buffer strips (VBS) may not be as effective as previously assumed at managing nutrient loss to watersheds in cold-weather climates.

“Buffers are a popular best management practice (BMP) because they are inexpensive and relatively easy to implement, owing to the presumption they need little management after establishment, and they have been proven to be effective at reducing the transport of nutrients into surface waters,” writes lead author Kristen Kieta, a graduate student studying with Philip Owens, a professor at the University of Northern British Columbia, in the journal Environmental Reviews.

In Canada, VBS are recommended as a best management practice for managing nutrient loss in runoff to mitigate eutrophication of water bodies. But they’re also recommended for a range of other purposes. As recently as 2017, buffer strips were identified by a working group to Agriculture and Agri-Food Canada’s Mitigation Group of the Multi-Stakeholder Forum as one of four mitigation practices with the most potential for reducing pesticides, including neonicotinoids, in runoff from agricultural land entering waterways and water bodies.

But according to David Lobb, a professor in landscape ecology at the University of Manitoba, who also co-authored the Environmental Reviews study, VBS may not actually be very efficient at filtering contaminants from runoff.

One problem with the conventional understanding of VBS has to do with basic hydrology, or the relationship of water to land. VBS are imagined as strips of “natural” land along the edges of waterways and water bodies that “buffer” the movement of nutrients in runoff from farm fields.

But because water typically moves via flow paths that are lower lying than the surrounding land, a very small percentage of riparian buffers encounter runoff water. Flow paths where interception and filtration are expected to occur constitute only one to two per cent of the length of the riparian buffers he has surveyed, Lobb says.

“If surface runoff is the means of transport of any contaminant from agricultural land to waterways or water bodies, this water and the contaminants it is transporting concentrate into little surface streams that normally flow through riparian areas along these runoff flow paths,” he says. “It is possible to shape the land surface of riparian areas to disperse runoff and aid in filtration, but this cannot be fully effective, and it is rarely done.”

Flow paths can also extend quite a length into a field, Lobb says. Management of flow paths should be a greater priority than management of the entire length of the riparian zone.

There’s another reason VBS can be ineffective at filtering nutrients in northern climates – and why they can often even contribute to nutrient loss.

Across Canada, a great deal of our precipitation occurs as snowfall, and most runoff occurs as a result of snowmelt. In the spring, massive amounts of water move overland into ditches and waterways over frozen ground, carrying nutrients with it. In the summer, most precipitation is adsorbed by the soil and taken up by living vegetation, and runoff usually isn’t a problem.

“What makes all of that even worse is that our ground is frozen during the winter and early spring, greatly limiting infiltration,” Lobb says. “This is the norm across much of the country.”

The majority of runoff events occur in the spring before vegetation can intercept nutrients. This means that nutrients trapped in VBS “sinks” are vulnerable to releasing nutrients and losing them to the runoff during spring snowmelt and rainfall, contributing to the problem in downstream waters.

In their review paper, Kieta, Lobb and co-authors look at ten studies of VBS across cold climates (in Canada, the United States and northern Europe) with the goal of summarizing research designed to determine the effectiveness of VBS in reducing P transport in cold climates and collating research on the potential for vegetation to release P after undergoing freeze-thaw cycles (FTC).

What they found is that there is consensus among researchers around the world that vegetation releases P after undergoing FTCs.

Even when vegetation is growing, it cannot necessarily filter nutrients effectively, says Lobb. It has been argued that VBS filters out sediments, and if nutrients are attached to soil particles, capturing sediments equates to capturing nutrients in erosion or runoff.

But Lobb’s own research in Manitoba has shown the vast majority of nutrients move in dissolved rather than particulate form, and dissolved P cannot be easily captured by VBS. 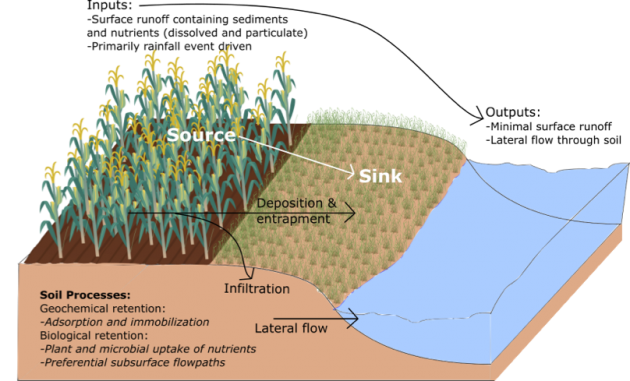 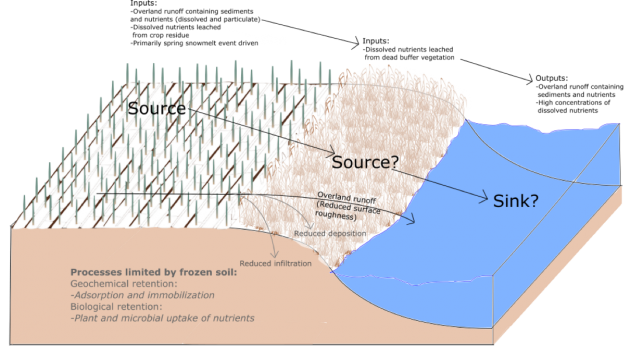 A conceptual diagram illustrating the reduced effectiveness of buffers in cold climates, when the buffer is covered in snow and/or ice and when soils and vegetation are frozen. In this scenario, the buffer is not always a sink for sediments and nutrients but can potentially become a source due to leaching of P from the buffer vegetation and the inability for infiltration to occur or for sediments to be trapped.

A third problem with the conventional use of VBS in Canada is the fact that they are generally thought to need little to no management, says Lobb.

VBS that are actually effectively trapping nutrients – working like “sinks” – must be managed if they are to fulfill their mandate of protecting waterways and water bodies from nutrients in runoff.

Lobb is a co-author on another recently published study looking at a site near the Whitemouth River in Manitoba, where the VBS reduced legacy P losses from adjacent land. The VBS soils in this study had a significantly smaller degree of P saturation than field soils, and the VBS soils also had not become saturated with P exports after many years of farming on adjacent land.

“But even on that site, the nutrients and sediment that were trapped by the vegetation may only represent a small percentage of the amount actually moving to the stream,” Lobb says.

This site represented one of only two sites out of more than 20 Lobb’s team studied that demonstrated efficacy at reducing P losses from adjacent land, he says. The Whitemouth site might have worked better than others due to a tillage ridge on the edge of the field that released water in a wider flow path and slowed water movement into the VBS.

But this site was no different from the others in that it, too, was largely left unmanaged.

Management of VBS, in an ideal situation, might involve creating flatter, wider flow paths to disperse the flow of water more evenly and broaden its chances of filtering. It might also mean extending management along flow paths right into the field – creating grassed waterways, for example.

But what management certainly means is regular removal of vegetation so captured nutrients are removed from the landscape and nutrients aren’t allowed to build up in VBS.

“If you have vegetation that is filtering, and you just leave that vegetation growing and never harvest or manage it, it becomes a saturated system and a major source of nutrients,” Lobb argues. “Leaving it as unmanaged vegetation may be making the situation worse.”

The most practical way to manage VBS is actually to grow a crop on it that is regularly harvested, says Lobb, making sure to maintain setbacks from waterways or water bodies for safety.