The first step in getting reliable data on the value of hail-rescue products is to be able to accurately and consistently simulate hail damage to crops. That’s not as simple as you might think. But Alberta researchers have come up with an innovative, inexpensive and effective hail simulation tool. So in 2016 they’ll start evaluating a variety of hail-rescue products in replicated, multi-location trials.

Hail can shred and strip off leaves and flowers, break stems, bruise seeds, aggravate crop disease, produce uneven maturity in crop stands and reduce yields. In Alberta, hail damage is a serious issue. Agriculture Financial Services Corporation (AFSC), an Alberta crown corporation that has been providing hail insurance to Alberta farmers for over 75 years, had its highest hail claim year in 2012, when it paid $445.6 million on 8400 claims.

Ken Coles, general manager of Farming Smarter, is leading the hail-rescue project, which started in 2015. His interest in hail damage was sparked by Alberta farmers who wanted to learn more about the effects of products such as fungicides and nutrient blends that were being marketed as treatments to help crops recover from hail damage. “We felt fairly strongly that we could answer their questions, but we’d have to do it in a controlled manner and probably in small plot studies, which meant we had to simulate hail,” he explains.

“We tried for a couple of years to get a project funded with not much success because the funders didn’t like the chances of us being able to come up with something that could simulate hail in a meaningful way. They seemed more interested in having us go to actual hailed fields, but my experience in field-scale research indicates we wouldn’t be able to control the variables enough to learn what’s what with any confidence, if we used that approach.”

He adds, “I think farmers have found the same thing when they try to evaluate the effects of a hail-rescue product on their own fields. The hail itself is so variable that you can’t know with any certainty whether spraying the product was worth it or not.”

Fortunately, the Alberta Pulse Growers Commission (APG) was willing to fund the project without shared funding from other crop producer groups. According to Coles, APG’s interest in the project was sparked by the experiences of pulse growers. “Some of the best anecdotal stories about hail-rescue products come from pulses, peas in particular. I’ve heard stories about responses to some of the strobilurin fungicides applied after hail that sound like big fish stories – farmers would spray half their hail-damaged field with the product and that half would out-yield the other half by 80 or 100 per cent. So the thought is that maybe there is something happening.”

Phase one of the project was to develop a hail simulation tool. To do this, Coles teamed up with Ralph Lange at Alberta Innovates Technology Futures (AITF).

Lange and his lab started experimenting with hail simulation about four years ago when AFSC asked them to study some issues around hail damage in canola. “AFSC wanted to look at the interaction between crop disease and hail. They also wanted to update the data used to correlate yield loss with the amount of hail damage; the existing tables were developed for canola varieties that were in production a long time ago. As well, we conduct some education and training for AFSC, so our hail damage work is also tied into that,” Lange explains.

To find reliable, accurate answers to AFSC’s questions, they needed to figure out how to simulate hail. Lange says, “When you do herbicide, fungicide or fertilizer experiments, it is easy to do each treatment several times at a location and at several locations. But you can’t get a cloud to hail on your treatment plots and not on your control plots.”

Lange’s group tried various ways to solve the create-your-own-hail challenge. For instance, they used scissors to remove branches from canola plants. “However, when a hail stone strikes a plant, it doesn’t always remove a branch completely. The branch may hang there by threads, or the hail may simply bruise it without breaking it. The scissors didn’t replicate that damage accurately enough,” he notes.

They also experimented with throwing pea-sized gravel by hand from a high vantage point down onto the plots, which produced fairly realistic damage. However, the people throwing the gravel would have risked getting repetitive strain injuries to create high levels of crop damage on replicated plot trials. Plus there was gravel all over the plots. Yet another method they tried was to use a flail mower, keeping the mower at a low speed and a relatively high height above the plots. However, it caused too much damage to accurately replicate what happens to hail-damaged plants.

“Then Rod Werezuk [a research technologist in Lange’s lab] came up with the idea of hitting the plants with a chain to simulate something with a roundish shape falling out of the sky,” Lange says. “We found that a fairly small chain – the original one was a dog leash – creates damage that looks a lot like hail. We confirmed that with the AFSC crop adjustors because they have seen thousands and thousands of instances of hail damage.” So Lange’s group has successfully been using hand-held chains for their canola plots.

“But of course, if you want to do multiple experiments over different locations, with different damage levels and all those things, then doing it by hand isn’t practical,” Lange notes.

So Coles took the chain idea and mechanized it. This custom-built machine involves many small chains on a rotating drum that is attached to the front of a small tractor. To test the machine, Coles collaborated with Lange’s group on their canola project in 2015. Lange’s team used their hand-held chains and Coles used the machine, and they compared the results. As well, AFSC crop adjustors evaluated the hail simulation effects on the plants.

“Amazingly enough, the machine turns out to be quite effective at simulating hail damage,” Coles says. “It’s not perfect yet, but we’ve identified where we need to make some tweaks to make it a little better.”

One of the great things about the machine is that the researchers have all sorts of ways to adjust it so they can get the exact hail effect they want. For instance, they can control the tractor speed, the drum speed and the direction of travel, and they can change the chain configurations and use different sizes or lengths of chains.

Coles says, “It gives us the ability to repeat the treatments, for replicated treatment plots. It also allows us to compare a hail-damaged crop to the same crop that wasn’t damaged. That’s critical to doing good science so we can know what the crop’s yield potential was without the hail.”

Lange adds, “We think this has great potential to put some solid numbers behind hail research. You can think of all kinds of scenarios. For instance, we’re looking at crop disease. Your first-year university plant pathology textbook will say hail damage to a plant will promote disease. Now we can replicate that to see if that is true or not, and to see how much damage it takes and when that damage has to occur, which diseases are affected more than others, and so on.”

Next steps
Now that they have a mechanized hail simulator, the researchers will be starting phase two of the project: the hail-rescue trials in pulses. It will be a collaborative effort between Coles, Lange and the Smoky Applied Research and Demonstration Association (SARDA), involving three years of trials at Lethbridge (Coles), Vegreville (Lange) and Falher (SARDA). This fall they are building two more of the simulators, so each site will have its own machine. All the sites will have pea plots, and the Lethbridge site will also have dry bean plots.

They are planning to have five hail damage levels (0, 25, 50, 75 and 100 per cent) and probably three timings for the hail damage (early, mid and late season). For the hail-rescue treatments, they will be comparing two fungicides, two nutrient blends and a combination of fungicides and nutrients. They will be evaluating the treatment effects on such factors as crop growth, harvestability and yields.

They have also added a new component to the project for 2016. Coles explains, “I’m going to work with Dr. Anne Smith, a remote sensing scientist with Agriculture and Agri-Food Canada, to look at the use of drones. I’m excited about the potential of drones, but I think it’s been a little overhyped and underdeveloped. Everyone is struggling with finding true value for drones in the agriculture industry, and much of the evaluation is being done in a way that is not reproducible, not even comparable. So I wanted to do a project where drones might help, and we thought this hail project would be a neat one.”

The idea is to use the plots to calibrate hail-damage imagery from drones. A drone can be flown over a crop field in parallel passes, taking photos at regular intervals to map the field. The drone’s camera can be set up to capture different wavelengths of light reflected from the field’s surface. Healthy plants have different reflectance characteristics than damaged or dead plants. The resulting imagery can be correlated with the crop’s actual condition, if the imagery has been “ground-truthed,” where known crop conditions are associated with the patterns in the imagery. So Coles and Smith will be flying a drone over the hail simulation plots to get the necessary ground-truthing data. Then they can develop a formula, or “algorithm,” to convert the patterns in the imagery into information on hail damage.

“If we can calibrate the imagery, then we could fly a farmer’s field and assess the level of hail damage and the spatial distribution of the damage,” Coles explains. “That might give the farmer better information for decision-making. For example, let’s say half the field is ranked at 90 per cent damage and the other half is 30 per cent. So if the farmer wants to apply a hail-rescue product, then he knows where to apply it.”

Looking further down the road, Coles might want to explore other questions about hail-damaged crops. In 2015, he had hail damage on his own farm for the first time, so his personal interest in the issue has skyrocketed. “It opened up my eyes to the challenges associated with hail – the percentage damage versus the timing of the damage, the crop type, the spatial distribution of the hail damage. There’s more to dealing with hail than just decisions about hail-rescue products. Around my farm, everyone with hail damage phoned the feedlot and ended up silaging their crops off. And I wondered, ‘Should I be doing that?’ I have a seed production contract with a local seed grower, so whether I can still make seed affects the decision. And then wherever there’s hail damage you get secondary growth with tillers. In my case, I estimated that I had 30 to 40 per cent regrowth. So if I have part of my crop ready to harvest and the other part is still green, what should I do? No one I asked really knew what to do.”

He adds, “Hail is a tough thing to deal with as a farmer because you have so much invested in your crops and you want to make the best of what you do have.” 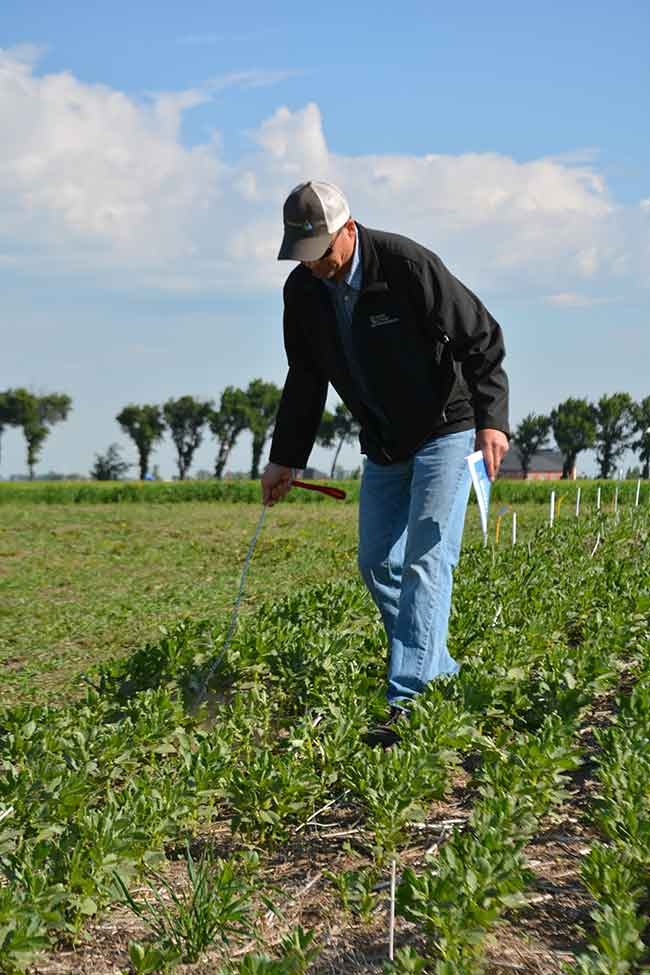 AITF researchers The first step in getting reliable data on the value of hail-rescue products is to be able to accurately and consistently simulate hail damage to crops.