Could a better indicator of end-use quality overcome the low protein concern for Prairie soybeans? 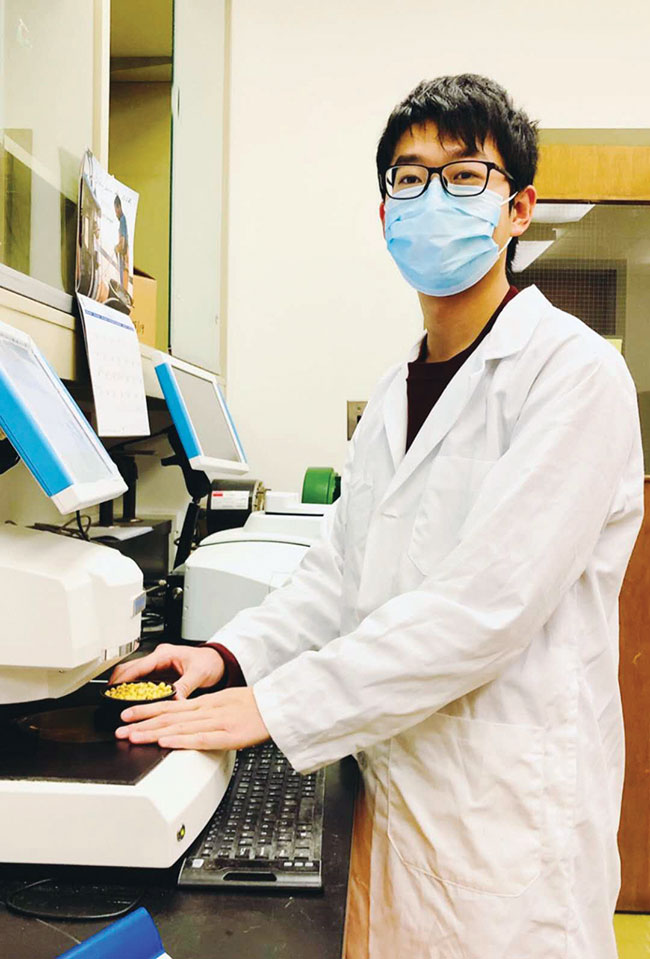 Crude protein, a commonly used indicator of soybean protein quality, tends to be lower in soybeans grown in more northerly areas. And that’s a concern for Manitoba soybeans. However, it turns out that crude protein levels may underestimate the feeding value of the protein in northern soybeans.

So, a Manitoba project is working with an alternative indicator of protein quality that is based on certain nutritionally essential amino acids, the compounds that make up proteins. And the preliminary results look very promising for protein quality in Manitoba soybeans.

The University of Manitoba’s James House is leading this project, which started in 2019. “We have been engaged in a program here at the university focusing around the quality of plant-based proteins. As part of that, we established the capacity to measure protein quality including amino acid composition and protein digestibility. Those are really important factors in the nutritional impact of plant proteins and in the marketing of plant proteins,” explains House, a professor and head of the University’s Department of Food and Human Nutritional Sciences.

“As part of that research, we engaged with the soy sector because there were some concerns over lower protein content in Manitoba soybeans and in particular the fact that certain soy crops were receiving discounts because their protein contents didn’t reach the minimum standard established by the particular purchaser. There was a real economic incentive for the sector to take a closer look at this issue.”

He adds, “Low protein is not just an issue for Manitoba soybeans. It is basically a north-south issue – the further north you go in the soybean-growing regions, the lower the protein content typically is.”

The Manitoba Pulse and Soybean Growers (MPSG) is very aware of the issue of low protein levels in northern-grown soybeans. MPSG has been supporting various protein-related soybean studies and is collaborating with House on this project. The Western Grains Research Foundation and the Canadian Agricultural Partnership are helping to fund the project.

Along with the north-south trend in protein levels, there has also been an overall decline in protein content in North American soybeans over time, notes Cassandra Tkachuk, an MPSG production specialist. “We suspect this decline might be due to breeders selecting for higher yields while potentially sacrificing protein levels; researchers have found an inverse relationship between soybean yield and protein.”

On the positive side, Canadian researchers are working to get a better understanding of the reasons for the north-south protein trend and to improve protein levels in Prairie-grown soybeans. In fact, as the line graph shows, protein content in western Canadian soybeans has had an overall upward trend since 2006 – although western protein levels remain lower and more variable than those in Eastern Canada.

Although crude protein content is relatively easy to measure, the problem with using it as the sole indicator of protein quality is that soybean meal with a higher protein content does not necessarily have higher amounts of the particular amino acids needed in animal rations.

“Livestock nutritionists don’t really formulate diets around crude protein any more. They formulate around the amino acid content, making sure the animals have the correct levels of the digestible amino acids [for good health and growth],” House explains.

“Typically, nutritionists are using soybean meal to balance the amino acid profile coming from the main ingredient in livestock diets, which is normally a cereal grain, particularly corn, wheat or barley. The amino acids that tend to be the most important ones to add to cereal-based rations [for pigs and poultry] are lysine, threonine, cysteine, tryptophan and methionine.”

And that’s where another indicator comes in: the Critical Amino Acid Value (CAAV). CAAV is the sum of those five amino acids, measured as a percentage of crude protein. It was developed in the U.S. as an indicator of protein quality in soybean meal for livestock feeding.

“The Critical Amino Acid Value concept was brought to our attention based on what our neighbours to the south are doing. Soybean growers in states like North Dakota, Minnesota and South Dakota are also dealing with this low protein issue. They initiated research a few years ago looking at these critical amino acid value levels,” Tkachuk notes.

House says, “Interestingly, the U.S. researchers have found that as protein levels go down, you actually maintain or increase the levels of those really critical amino acids that tend to be limiting in a cereal grain diet.” So, soybeans from the northern U.S. are competitive with soybeans from more southerly regions in terms of these key amino acids for livestock rations. 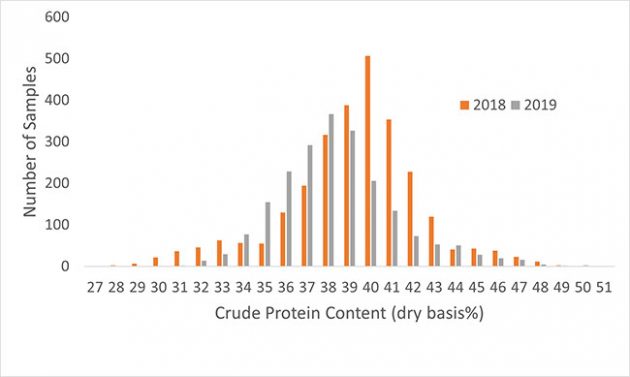 About the project
House and MPSG want to see if this U.S. finding also holds true for Manitoba soybeans. One of the project’s objectives is to determine the crude protein and amino acid levels in Manitoba-grown soybeans.

House’s project team is analyzing samples from the MPSG-funded annual soybean variety performance trials in 2018, 2019 and 2020. The trials include herbicide-tolerant and conventional soybean varieties grown at multiple Manitoba locations.

The project’s other objective is addressing the fact that standard chemical methods for measuring amino acid levels are time-consuming and expensive. House’s team is working on a faster, simpler and cheaper way to measure soybean amino acid levels. This will make it much easier for Manitoba’s soybean sector to routinely use amino acid levels to assess protein quality.

“We are using near-infrared reflectance (NIR) spectroscopy,” House explains. “NIR is a rapid, non-destructive method for measuring the chemical constituents in a sample. The sample is bombarded with near-infrared light, and the pattern of light reflected back by the sample provides a lot of information about the sample’s constituents.”

NIR has been used to analyze food and agricultural products for many years. However, NIR accuracy depends on accurate calibration equations that correlate the near-infrared data with the data from standard chemical analysis techniques. These calibration equations are specific to the type of product being analyzed and the particular constituent being measured.

House’s team is developing calibration curves for measuring crude protein and amino acid content in soybeans. They are creating curves for two different NIR systems, available through a partnership with PerkinElmer, a company that develops NIR and other scientific technologies.

So far, the team has completed the NIR scans of almost 5,000 samples from the 2018 and 2019 MPSG variety trials. As well, they have analyzed a representative subset of those samples to measure crude protein and amino acid levels using standard wet chemistry methods. They are currently analyzing the 2020 samples.

The comprehensive and varied set of soybean samples from the MPSG trials should enable development of very good calibration curves. House says, “The data that you generate with these NIR machines is only as good as the quality of the reference chemistry methods. And having more samples and more variability in the samples tends to strengthen the calibration curves.” 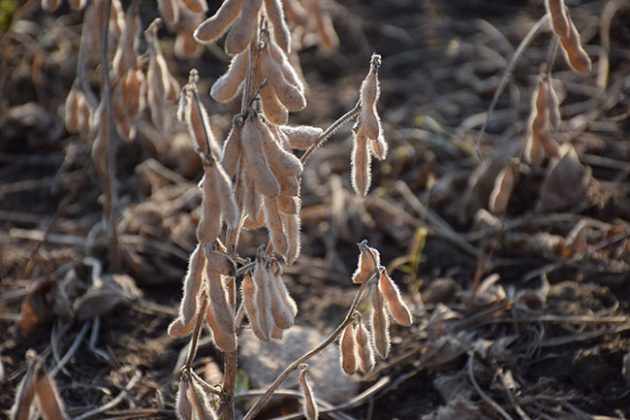 Promising results, potential benefits
“Our initial results for the 2018 and 2019 samples are showing significant variability in the protein content and amino acid content among the samples. And some varieties have very high levels of protein and the critical amino acids,” says House. The bar chart shows the crude protein results.

At present, he can’t say which specific varieties have the highest CAAV and protein levels because his team is working with anonymized samples, where the identifying details about the variety and growing location have been removed.

However, MPSG has those identifying details and will be able to use the varietal results to help soybean growers, breeders and others in the province’s soybean value chain.

House’s team is making good progress on developing the NIR calibration curves, which will be made available for use by Manitoba’s soybean sector. “The NIR measurements will not be as precise as the standard reference wet chemistry method, so users will need to understand both the opportunities and constraints around using these rapid methods,” he notes.

“Our goal is to establish calibration curves that are sufficiently robust to allow people to use NIR for decision-making purposes.”

As expected, analysis of the sample data so far shows an inverse relationship between CAAV and protein content.

Manitoba soybeans have similar critical amino acid levels to southern-grown soybeans. “That is really important for the soybean sector here in Manitoba when they are trying to compete with soy from the southern U.S. or from Brazil, for example.”

House sees the potential for the project’s results – the varietal data, the NIR curves, and the overall trend in end-use protein quality – to provide benefits throughout Manitoba’s soybean value chain.

For instance, the data on the amino acid and protein content in current soybean varieties could help growers when choosing which soybean varieties to grow. For soybean breeders who want to develop varieties with higher protein quality, NIR would be very useful, especially since this non-destructive method would allow them to measure protein and amino acid levels even when they have very limited amounts of material.

As well, he notes that producing soybean varieties with optimal protein characteristics is important for attracting a soybean crushing sector to the province. “There needs to be a focus on the use of the meal and you want to make sure the meal is the highest quality possible to be attractive to the local livestock sectors to make full use of it.”

And crushers could use NIR to determine the protein quality of the soybeans coming into their facilities. He adds, “In the future, livestock feed mills could use NIR to rapidly assess the amino acid content of the grains and even tailor their feed formulations in real time.”

House also sees an opportunity to position Manitoba soybeans for the human food market. “For example, protein content is an important part of determining the marketability of [various soy-based food products]. So this research will definitely benefit them as well.”

“Overall, if we have the ability to market our soybeans based on the amino acid values, then there would be less risk of a protein discount and load rejection. Reducing that risk would ultimately put more money in farmers’ pockets,” she says.

“We might also be able to reduce our reliance on blending our soybeans with soybeans grown in other areas that have higher crude protein. Blending can be difficult, inconsistent and inefficient, costing more in processing, which ultimately leads to that discount.”

Although there’s more research to be done to get the full picture of end-use protein quality in Manitoba soybeans, the progress so far has been promising – so far, so good.