In Western Canada, some growers are moving to more intensive rotations because of market opportunities. However, researchers are encouraging growers to consider increasing crop diversity and lengthening rotations over the long term to reduce risk and maintain the good crop technology and effective tools currently available.

“The more practices growers can use in their operations to increase diversity, including different crops, varieties and fungicides, [the better chance of reducing] cropping risk over the long term,” says Dr. Randy Kutcher, associate professor, Crop Development Centre at the University of Saskatchewan. “Although the benefit of rotations may not directly relate to the amount of disease in the field in a cropping season, the consequences can be seen five or 10 years down the road. Shorter rotations increase the selection pressure on a pathogen population for those strains or races that can overcome resistance genes in varieties or that are resistant to various fungicides, particularly those that have a single site mode of action.”

Crop rotation has a direct impact on the growth, survival and reproduction of many pathogens, especially those causing diseases that are residue borne and remain on the plant material left behind in the field. The amount of time the residue takes to break down depends on the type of crop and environmental conditions.

“Cereal residue generally breaks down more rapidly than the woody stems and bits on the bottom of canola that can remain in a field at least three or four years, depending on moisture conditions,” explains Kutcher. “Under wetter conditions, residues will break down sooner than under drier field conditions. Therefore, under shorter canola rotations for example, the carryover of infected residue increases the selection pressure on the blackleg pathogen for races that can overcome resistant cultivars and for strains resistant to fungicides.”

The results of a long-term rotation study led by Kutcher, Stewart Brandt and other researchers over 16 site years at Scott and Melfort, Sask., show the impact of intensifying canola rotations. The study compared a blackleg-resistant canola hybrid and a blackleg-susceptible cultivar grown continuously or every two, three or four years in rotation with pea, wheat and flax. At Scott, the replicated trials started in 1998 and continued to 2007, while the trials at Melfort ran from 1999 to 2006. The trials also included fungicide treatments for blackleg and sclerotinia stem rot diseases.

“The results confirmed that shorter rotations increase the risk of higher disease incidence,” says Kutcher. “Although the yields of blackleg-resistant canola were similar among rotations that included canola every two, three or four years, the incidence and severity increased for rotations that included canola more than once in four years. In a two-year rotation, the number of infested plants more than doubled and more than tripled in continuous canola compared with the four-year rotation. Therefore, over the longer term even with resistant cultivars, the higher the frequency of canola in rotation, the greater the increase in the pathogen population and the higher the risk of resistance breakdown of current canola cultivars.”

The fungicide applications did not show a significant benefit on the blackleg-resistant cultivar and only a small (eight per cent) yield improvement on the susceptible cultivar. Researchers also looked at sclerotinia, but it was never a problem at Scott and was only a problem in one year at Melfort in the canola crop. Kutcher explains they had placed pea in rotation prior to canola in the trials on purpose to increase the risk of sclerotinia in canola. However, because sclerotinia is a disease that is affected largely by the environment, it is difficult to predict when it will be a problem, and over the years of the study it was not.

Part of the research included an economic analysis of the various rotations in this study led by Dr. Elwin Smith with Agriculture and Agri-Food Canada (AAFC) in Lethbridge, Alta. “The analysis was conducted over the last four years of the study when the greatest impact from rotations was expected,” says Kutcher. “Overall, the analysis showed that the continuous canola and pea rotations were the least profitable. When canola was significantly higher priced compared to wheat and other crops, then there was an economic benefit to shorter canola rotations.”

“The results from our study and the economic analysis suggest that canola cultivars with strong blackleg resistance can be grown more intensively than once every four years with limited yield reduction,” says Kutcher. “However, growers are encouraged to rotate crops, rotate varieties and rotate fungicides so the industry doesn’t lose resistant varieties and our fungicides stay effective for a long time. Weed scientists and entomologists note the same principles of diversity and rotation apply and are concerned about the increasing levels and risk of weed and insect resistance in our cropping systems. Good practices, including increasing diversity and rotations, help growers reduce production risk and protect long-term profitability.” 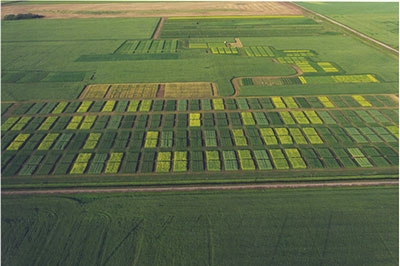