A popular notion may not be correct, after all. Many people think that in wet years, crop roots do not grow deep into the soil because all the soil moisture the plant needs is near the surface. A recent crop-rooting demonstration, using new root-scanning technology, just might disprove that thought.

“We basically went in there to see what was going on. We had no idea what was going to happen,” says Kelsey Brandt, a technician with Agriculture and Agri-Food Canada. Brandt worked with a team, including Dan Ulrich, Eric Johnson, Hong Wang, and Stewart Brandt, to put on the demonstration.

Each plot was seeded on a single pass. The seeder was fitted with six Atom Jet single-shoot hoe openers on 10-inch row spacing, and the seed furrows were packed with three-inch “V”-type packer wheels. Fertilizer was placed with the seed. Weather information was collected from a local meteorological site.

Shortly after the plants were seeded, Brandt scanned the roots. When he scanned them again on July 13, he saw that all the roots stretched deep, despite abundant rain.

“Everything was treated the same and we just went in there looking to see what the roots would look like and where the root masses were. I’ve always thought that annual weeds like green foxtail root shallowly, and compete early and vigorously for resources the crops need. I didn’t realize that their roots would be just about two feet down. I knew that the wheat and canola went down fairly deep into the profile, but with receiving that much moisture, I didn’t expect them to be past the three-foot mark that early in the season,” Brandt says.

New technology allows researchers to see root growth
The original purpose of the demonstration was to showcase new technology.

“This is a relatively new method. We’re inserting a scanner right into the soil and measuring an area about the size of an eight-by-ten sheet of paper. More traditional methods such as greenhouse, soil core sample or excavation root studies are expensive, labour intensive, and they don’t always reveal the true situation. They can also be destructive, leaving only one opportunity to measure the roots. Rooting systems are the hidden half of crop production, and their impact on yield and the environment has not been studied in depth. This root scanner is a non-destructive way to measure rooting systems all season long,” says Brandt.

To scan the roots, researchers removed a soil core that was three inches in diameter and 150 centimetres long. A clear acrylic tube was slid into the ground at a 45-degree angle, reaching a total depth of 100 centimetres.

Researchers then attached a depth gauge to a root scanner, and inserted the scanner into the tube. The scanner captured images at various depths, and the images were collected on a computer. By piling the images on top of each other, researchers could see the entire tube.

Staff members at the Semiarid Prairie Agricultural Research Centre in Swift Current have used the same root-scanning method at their research plots.

“That was a particularly wet year for both areas, and in both areas we noticed the roots, particularly the canola and the wheat, extended beyond what we could measure with our root scanner,” Brandt says. At the Swift Current site, canola, peas, and wheat were seeded into extra tall stubble. Researchers also looked at root growth in several native plant species, including purple prairie clover, alfalfa and native grasses. Roots ran deep with the native species as well.

Implications for crop producers and researchers
Though more research is needed, some of the results from the demonstration can be applied on the farm. “In terms of the weed control, I would expect that it would reaffirm that they should get rid of them earlier,” Brandt says.

“There’s lots of potential to look at drought tolerance and the mechanisms that these plants use to explore the soil for nutrients and moisture. For example, crops that have plentiful moisture early in the growing season, followed by dry conditions, often appear very drought stressed. Is this because they continue to use moisture rapidly, or are their roots unable to access the moisture remaining? This technology could help answer this question and provide clues about how we might better manage crops in these circumstances. As well, it might help us better understand drought-tolerance mechanisms in wheat.” 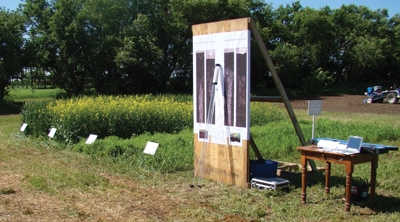 Demonstration site at the Scott Experimental Station. A popular notion may not be correct