End now within sight after 12 years. 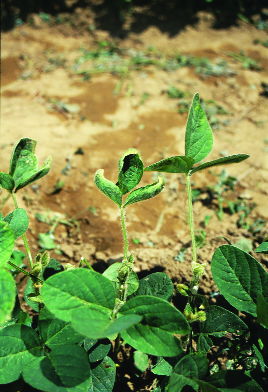 Not long ago, researchers from universities and seed companies would tell growers and industry stakeholders that the road from an idea’s first concept to commercial availability was a process of 10 to 15 years. Through transgenics, dihaploid technology and nurseries in Central or South America, seed companies and researchers have reduced that time significantly.

Yet in imparting dicamba resistance to soybeans, researchers at the University of Nebraska at Lincoln (UNL) have opted for the ‘slow and steady’ approach, and for good reason. “It has been quite a complex study of biochemistry, molecular biology and microbiology,” explains Dr. Don Weeks, a biochemist and professor, who has been a lead researcher on this project for nearly a dozen years. Although news of its development came to light in May 2007, Weeks concedes word has been very slow to reach both the scientific and farming communities.

The road to developing resistance began with a simple premise: after just a few months, dicamba cannot be detected in soil. The question became, ‘Can the chemistry that works so well against broadleaf weeds in corn and wheat be used on broadleaf weeds in soybean fields without hurting them?’ The degradation that dicamba experiences comes almost entirely from the interaction of numerous bacterial strains and other life forms naturally present in soils.
“There are many different organisms that, one way or another, can inactivate dicamba,” says Weeks. Using the strain Pseudomonas maltophilia, Weeks and his team discovered a gene that marked a first step in breaking down dicamba in the soil to carbon dioxide (CO2), water and a chloride ion (Cl-). The first step itself, converting dicamba to an acid {3,6-dichlorosalicylic acid (DCSA)} was the key to furthering the research. “That first step of degradation actually inactivates the herbicidal activity. So we could take that bacterial gene, genetically engineer it so it behaved like a plant gene and then transfer it into plants and ‘ask’ those plants that express that gene to break down dicamba before it built to toxic levels.”

Durability with adaptability
From there, Weeks focussed on the bacterial conversion of dicamba to DCSA, with a chain of three enzymes including dicamba mono-oxygenase (DMO). “We were surprised with the very high levels of resistance that we attained, even in plants that are expressing relatively little of the DMO enzyme, so the plant is well protected,” says Weeks.

Once the initial genetic transformation was complete, Weeks and plant scientist Tom Clemente, head of UNL’s plant transformation core facility, placed the gene into tobacco as a model plant cell system for the purpose of transforming and regeneration. “We’ve also put it into the favourite plant model system, Arabidopsis, as well as soybeans,” says Weeks. “In tobacco, we have resistance well over 10 pounds per acre, whereas the normal rate farmers would use would be a quarter to a half a pound per acre. In soybeans, we tested them in the greenhouse, with up to five pounds per acre or 10 times the highest normal rate recommended. At this very high level, plants showed no signs of damage.”
Further study yielded the discovery that additional modifications to the DMO gene would virtually eliminate the potential for resistance to spread to other plants by targeting the DNA of a tobacco plant’s chloroplast, the site where photosynthesis takes place. Since chloroplast
genes are passed on through the maternal side of a plant, it would prevent resistance from occurring through pollination.

In 2005, the University of Nebraska licensed the technology to Monsanto and the company has been promoting it as one of the many developments in its portfolio of advancements currently in the works. Weeks acknowledges that growers can expect to see commercial availability of dicamba resistant soybeans in approximately three years.