Features Agronomy Other Crops
Development of canola in Canada

Four decades ago, the first canola variety was released. Today, Canadian farmers grow the crop on about 20 million acres, and canola contributes about $19 billion to the country’s annual economy. Canola’s remarkable transformation into one of Canada’s most important crops has come about through research and rapid adoption of advances by producers, crushers and others in the value chain. With continued innovation, canola’s future could be just as bright.

Canola’s story begins with rapeseed. Canadian interest in growing this crop was spurred by the Second World War. “Rapeseed oil was the best oil of any type to cling to metal surfaces when washed with steam or water, and that is what steam engines required. So it was an essential oil for trains, ships [and other machinery needed in the war effort],” Keith Downey, who led the rapeseed/canola breeding program at the federal agricultural research station at Saskatoon from 1957 until he retired in 1993, says. Downey is known as one of the “Fathers of Canola,” along with University of Manitoba breeder Baldur Stefansson.

During the war, Canada’s rapeseed oil supply was cut off first from Europe and then from Asia. So the Saskatoon research facility was asked to investigate if rapeseed could be grown on the Prairies. Downey’s first experience with the crop goes back to that time, when he was a schoolboy working in the rapeseed plots during the summer.

“The Argentine type probably originated on the docks in Argentina, off-loaded from some vessel from Europe,” Downey says. “The Polish type originated with a farmer [Fred Solvoniuk] in the Shellbrook area [of northern Saskatchewan]. The story goes that he came from Poland and brought some of the seed in the seams of his clothes. His wife used it as a source of oil, and they grew it in their garden before the war.”

Downey notes, “At the time, the Argentine type was about 10 to 15 per cent higher yielding than the Polish type. However, it took 105 or more days to mature, and that was a little late for most of the growing area. The Polish type was 10 days earlier maturing, so a grower could seed it early and take it off before the wild oats shattered their seeds, or he could kill the first flush of weeds through cultivation and then sow the crop and get it off before the fall frost.” So the Polish type was more attractive to most growers.

Rapeseed was traditionally used as an edible oil in various other countries, and in the 1950s, Canadian interest in this use was increasing. However, as nutritional researchers began to study the oil, they identified erucic acid, a long-chain fatty acid in rapeseed oil, as a possible health concern.

So, in 1958, Burt Craig of the National Research Council (NRC) of Canada developed a rapid, accurate method to analyze the fatty acid content of oils. That enabled Downey and Stefansson to evaluate their breeding material for erucic acid levels. By 1961, both breeders had very low erucic Argentine lines, and by 1964 Downey had a very low erucic Polish line. Downey’s Argentine variety Oro, with an extremely low erucic acid level, was released in 1968.

By 1970, the nutritional evidence against high erucic rapeseed oil was overwhelming. So Agriculture Canada took seed of Oro and Downey’s low erucic Polish line to southern California to increase it over the winter to ensure plenty of seed was available. At the same time, Downey and his colleagues brought together Canadian crushers, oil manufacturers, nutritionists and others, and they convinced the crushers of the crucial importance of using low erucic rapeseed. “Within two years, the Canadian rapeseed crop was completely changed to the low erucic material,” Downey says.

But another issue was still holding back Canadian rapeseed oil production. “The seed contained high levels of glucosinolates, which caused health and feed efficiency problems when the meal was fed to non-ruminant animals like chickens and swine. So even though the oil market wanted more and more of the oil, the crushers could only provide so much oil depending on how readily they could sell the meal,” Downey explains.

Once again, NRC researchers provided a key step forward. “In 1970, two chemists at the NRC in Saskatoon – Clare Youngs and Les Wetter – came up with a fast, accurate method to determine the levels of glucosinolates,” Downey says. That allowed Downey and Stefansson to screen their germplasm for glucosinolate levels. In 1972 and 1973, they each had an Argentine line with low erucic and low glucosinolate levels – called “double-low” rapeseed – in the co-operative trials to evaluate rapeseed lines. Stefansson’s line was a little higher yielding so the expert committee chose it. That line was registered as Tower in 1974.

The industry’s transition to double-low rapeseed wasn’t quite as fast as its change to low erucic rapeseed because Tower, as an Argentine variety, was only adapted to southern Manitoba and a small part of southeast Saskatchewan. However, the 1977 release of Downey’s Polish variety, Candle, provided the rest of the growing area with a double-low option. By the 1980s, all rapeseed production on the Prairies was double-low.

In 1978, double-low rapeseed was named canola, for “Canadian oil,” to distinguish it from regular rapeseed, with its very different fatty acid composition. “All of the nutritionists and oil chemists working on canola oil were also key to making this crop successful,” Curtis Rempel, vice-president of crop production and innovation with the Canola Council of Canada, says. He points to Prairie researchers such as Frithjof Hougen, James Daun, Bruce McDonald, Michael Eskin and Roman Przybylski, who worked on characterizing canola oil and its nutritional properties, and on canola oil utilization for successful use in the food industry. As well, Downey notes researchers such as Milton Bell, Don Clandinin and John Bowland were instrumental in establishing the value of canola meal for livestock and poultry.

Ongoing advances
Canola research and production continued to advance over the following decades. “In the early 1980s, the big story was increasing acreage and profitability as growers became more familiar with the crop and as global demand increased. By 1979, Japanese imports of canola exceeded one million tonnes,” Rempel says.

“Another milestone was in 1985, when canola received GRAS – Generally Recognized as Safe – status in the U.S., and the U.S. became a big buyer of canola oil and meal.”

The next big changes were the herbicide-tolerant canolas, with the first major commercial plantings on the Prairies in 1997, and high-performing canola hybrids, with the first major commercial release in 2001. Both innovations were rapidly adopted by producers. “Those two advances together led to a steep change in yield and profitability on the Prairies,” Rempel says. “Around that time, farm cash receipts and profitability from canola surpassed wheat.”

A further milestone was the introduction in 2004 of high oleic acid canola. The oil from this type of canola has high levels of heart-healthy omega 9 fatty acids. And it has an extended shelf life without hydrogenation, so it’s a great option for companies that want to produce foods with zero trans fats. Rempel says about 11 to 12 per cent of the marketplace is currently high oleic, and he expects that percentage to increase.

A bright future
With continued breeding improvements, Downey and Rempel see a strong future for canola.

“The genus and species are very accepting of genetic manipulation, and I’m hopeful that we can overcome the misinformation [about genetically modified crops] out there on the Internet,” Downey says. “It needs to be understood that all the foods we eat have been genetically modified by man, and we need that ability to genetically manipulate plants so we can continue to feed the world. The opportunities there are huge, so we need to be able to take advantage of that.” However, Downey is very concerned that the decline in federal funding for long-term basic research will hamper further improvements in canola, as well as other crops.

Rempel is optimistic private breeders will continue to be interested in canola. “Globally when companies consider making investments in crop research, acreage is one of the tipping points. Especially if canola acres stay above 20 million, then I think abiotic traits like drought-tolerance and frost-tolerance will come into canola.”

He adds, “We’re getting new pests like Verticillium wilt, swede midge, etcetera, so we’ll need ongoing adaptation of the crop for disease and insect resistance. I can even see something like Bt canola in the not-so-distant future.”

Rempel thinks some of the biggest wins will be related to oil modification. For example, he notes, “Global fish stocks are under intense pressure. So, to provide the omega 3 fatty acids that come from fish – EPA and DHA, which are important for heart health, brain development and cognition – canola is going to be modified to produce those omega 3s. At least four companies are working on that, and I believe we’ll be growing those types of canola in the next decade.”

Further down the road, Rempel sees the potential to breed canola for enhanced protein bioavailability for the human food market. “The Food and Agriculture Organization is predicting a dramatic increase [in global demand] for vegetable protein for human health and dietary reasons. I believe canola, with its protein profile and some of the breeding tools that we have, could be a player in the human protein marketplace.” 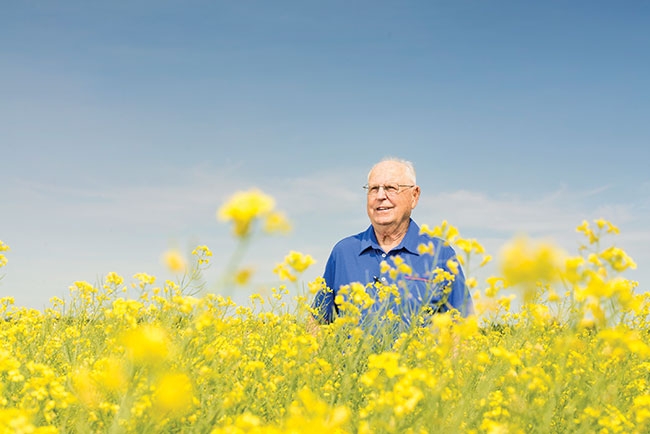