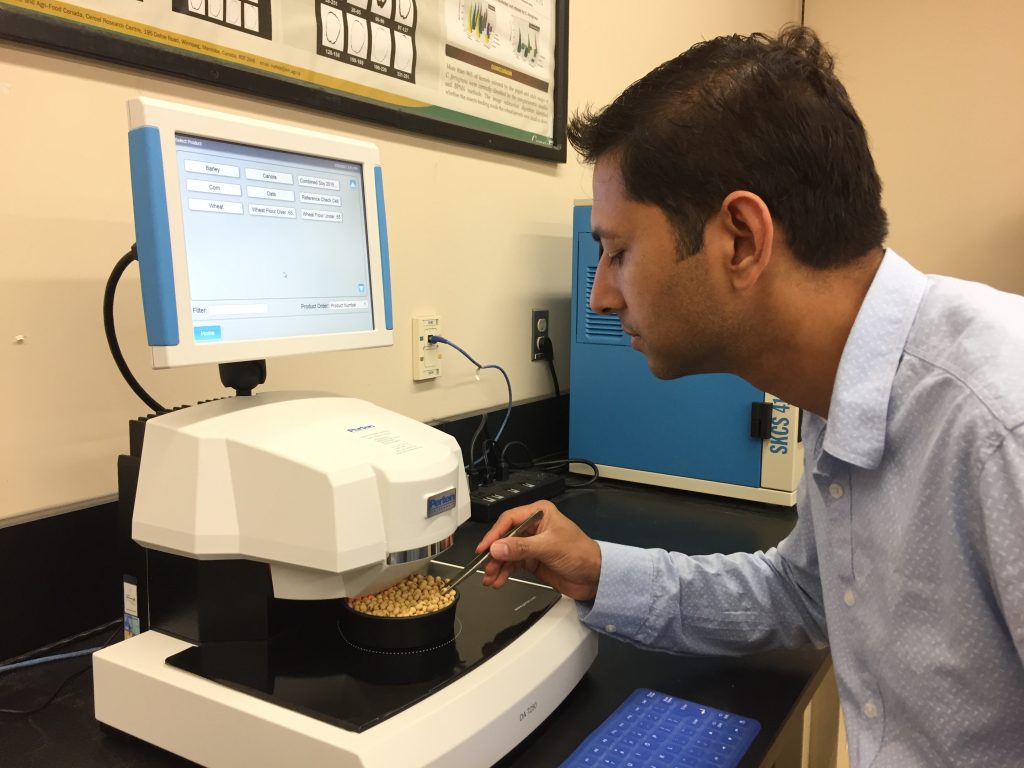 There is more to safely storing soybeans than putting the grain in a bin at the Canadian Grain Commission’s recommended less than 14 per cent moisture content. Air temperature and humidity come into play inside the grain bin to impact soybean storage.

“Although a considerable amount of information is available for other crops, the information available on the equilibrium moisture content (EMC) characteristics of soybeans grown in Canada is limited and outdated. This is especially true for new varieties of soybeans with short maturation periods that have been bred to grow in the North American prairies,” says Jitendra Paliwal, associate dean and professor in the faculty of agricultural and food sciences at the University of Manitoba. “Additionally, there have been no studies on the EMC and sorption isotherm properties of soybeans involving the effects of pre-treatments, such as drying-wetting and freeze-thaw cycles that take place during storage.”

Paliwal recently led a research study looking at the EMC values for three popular soybean varieties grown in Manitoba with funding from the Manitoba Pulse and Soybean Growers. The moisture content where grain will stabilize if the air temperature and humidity remain constant for a period of time is referred to as EMC. This can be used to help predict safe storage conditions for the grain, as well as predict how the ambient air used for natural air drying (NAD) will affect the moisture content of grain. For NAD, grain will dry down when the EMC of the ambient air is less than the moisture of the grain.

The research looked at different post-harvest scenarios where the three varieties were either subjected to three drying and wetting cycles or subjected to three freezing and thawing cycles, in addition to a control of freshly harvested seed without any treatments. These pre-treatments resulted in initial storage moisture content ranging from five to 17 per cent. They were also subjected to six different equalization temperatures ranging from 5 C to 30 C, and five different relative humidity (RH) values for a typical range in storage humidity.

EMC values help guide storage parameters
Although the effect of soybean variety on the sorption isotherms and EMC was not statistically significant, each variety responded differently to the pretreatments simulating post-harvest conditions. Paliwal explains that the different responses were related to differences in seed coat rather than seed size.

“The differences amongst varieties can be attributed to their genetic differences. During plant breeding, different lines are bred to enhance specific traits such as drought, disease, herbicide or pest resistance, or to alter their yield/maturation period. These genetic differences also bring about bio-physio-chemical changes in the crops. Although not all of this is fully understood, it is known that these genetic changes cause differences in how the seeds respond to different pre-treatments in our study,” he explains.

The research created EMC charts for three of the most important soybean varieties grown in Manitoba. In general, the pretreatments resulted in lowering the EMC by up to 20 per cent compared to fresh soybeans. 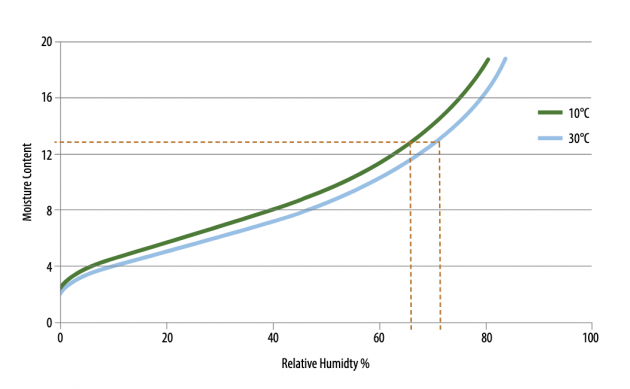 Comparison of the relative humidity of soybeans at ¬ % moisture content stored at ¬10 C and 30 C. Graph courtesy of Paliwal et al., 2019.

Generally, the research found that keeping storage temperatures below 10 C is critical at any seed moisture content. At higher temperatures, the EMC has higher RH inside the bin, which can enhance mold growth, free fatty acids, and volatile chemicals, resulting in deteriorating product quality and safe storage time.

For the soybeans subjected to pretreatments, the sorption characteristics were significantly different compared to fresh soybeans without the pretreatments. Repetitive changes in temperature and humidity during storage was found to have an impact on the moisture content of stored soybeans. The research highlights the importance of monitoring bin temperature and moisture conditions for safe storage.

“A logical extension of this study will be to develop safe-storage guidelines for soybean growers. We are currently developing these for a number of pulses and will soon be applying for funding to do the same for soybeans. The development of such guidelines requires long-term storage studies and for any given variety it takes about six to eight months of experimental work,” Paliwal says. “Crucial storage management decisions such as aeration, cooling, and turning can then be taken to prolong the health of the stored crop.”