Innovative approaches is adding value to the oat industry.

In the world of oat varietal development in Western Canada, new varieties have typically been developed by plant breeders at the Crop Development Centre at the University of Saskatchewan, and Agriculture and Agri-Food Canada in Brandon. While these institutions have been very successful in developing new varieties, there is a relatively new oat breeding company bringing high-value oat varieties to market.

“We started out as a family company to see what we could bring to the oat industry in terms of research and value,” says Jim Dyck of Oat Advantage in Saskatoon. “We’ve had success with two new varieties, and they are setting the platform for going ahead.”

Dyck and his wife, Laura-Lee, started their family-run oat breeding company in 2008, when he felt there were ways to bring increased value to the oat industry. Their focus is to be an imaginative, hands on oat breeding company developing high-value oat varieties and oat grain for producers, millers and consumers. The business is incorporated as Vesper Sparrow Prairie Research Inc., and relied heavily on all members of the family – four children included – to run the 80-acre operation.

In some senses, their breeding program is like other conventional breeding programs that select lines from crosses of parent lines for typical yield and agronomic characteristics. He chooses single-parent plant varieties or accessions from the Plant Genome Resources of Canada at Innovative Place, Saskatoon, and cross-pollinates them in the lab or in field plots. He assesses thousands of resulting oat plants and lines, selects the most promising, and moves them to small plot evaluations.

In 2015, he was successful in obtaining registration on his first two oat varieties. Ore3541M and Ore3542M are distributed by SeCan Association, and have now advanced to being grown on more than 200,000 acres in Western Canada. Two additional oat varieties from Oat Advantage, ORe Level48 and ORe Level50, are just entering the oat market with Seed Depot.

Unique breeding approaches
Oat Advantage takes an innovative approach to seeking better quality that will benefit farmers, millers and consumers. These methods have come from talking to many of his partnerships in the industry, including farmers and millers, to better understand their needs. Quality traits like high protein, plumpness, thousand kernel weight and beta glucan levels are important characteristics.

An early focus of the breeding program was on kernel shape, plumpness, and Oat Kernel Uniformity (OKU). Millers look for uniformity of an oat sample, because it increases their milling efficiency. Percentage plumpness in the mid-90 per cent is his goal. Dyck took the innovative approach to breeding for plumpness in his early selections. 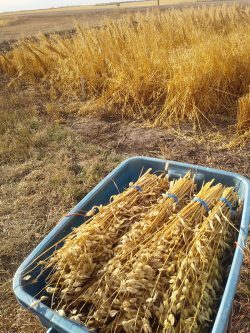 Dyck sorts through thousands of plants and lines when selecting for specific traits like kernel shape, plumpness, and Oat Kernel Uniformity.

“We did a lot of hand-sieving of lines to select for plumpness,” Dyck says. “Our selection criteria is that first they have to measure up to good quality, and then we will go back and find yield.”

ORe3541M is rated as 92 per cent plump in the Western Cooperative Oat Registration Trials (WCORT) and ORe3542M is rated as 95 per cent. This compares with most other oat varieties that are in the 80s. His two most recently registered varieties, ORe Level48 and ORe Level50 are rated as 96 per cent plump. Oat Advantage has an earlier variety than these, ORe6251M. This very early maturing oat is becoming popular in organic circles and has high plump (90 per cent), caramel-coloured kernels, with high beta glucan.

Stability of plumpness across a range of growing conditions is also another selection trait. For example, one of his new lines, OT6024 had an average of 97 per cent plumpness even on very dry sites and years tested in WCORT.

Plumpness is also a factor in the level of beta-glucans. These soluble fibres assist in lowering the risk of heart disease by helping to prevent the absorption of cholesterol from food. These fibres are found mainly in the outer layer of the oat groat. Consequently, thin oat kernel varieties tend to  present themselves as having more beta-glucan. With the determination to stick with a plump uniform oat kernel standard, Dyck has found that high plump/high beta glucan varieties can be achieved. ORe6251M with 90 per cent plump has 5.2 per cent beta glucan. ORe Level48 and ORe Level50 each are 96 per cent plump and have 4.8 per cent and 5.0 per cent beta-glucan respectively. The new industry beta-glucan standard is to be above 4.75 per cent.

“The yield wasn’t there because of the drought, but we were able to capture high protein in the line, and because we have lots of other siblings from the cross, we can go back and look for higher yield,” Dyck says.

Increasing test weight (bushel weight) is another focus. Typically, the bushel weight of oats has around 35 pounds (226 g/0.5L). Ore3541M and Ore3542M often have bushel weights off the combine in the mid-40s (290 g/0.5L). He has selected for bushel weight by selecting for kernels that are heavier, in recent years, with a gravity table seed cleaner.

One trait Dyck is looking at is the crease found on the oat groat. Some have a large crease, and Dyck thinks that if this crease could be filled better, the kernel would have a higher kernel weight.

“Through plant breeding, we hope to be able to fill in some of the gaps in the kernel, and hope to drive bushel weight near 55 pounds per bushel off the combine,” Dyck says. “That can make a big difference to on-farm grain storage and to shipping efficiencies and costs.”

Harvest durability is another selection trait. Dyck has selected lines that are able to stand up better during snowfall events, and lines that don’t drop their seed as quickly when mature.

Oat regrowth after an August rainfall is an issue for oat growers. It can result in immature green seed in the sample, and the green growth is an issue during combining. In 2021, growing conditions produced regrowth after an August rainfall. About 30 per cent of the lines in his plots started to regrow, but the other 70 per cent didn’t and were selected for further evaluation. 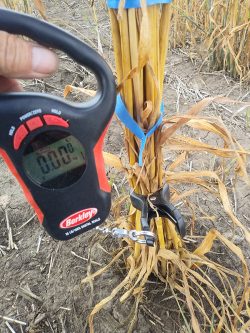 A fish scale is being used as an innovative way to try to standardize oat standability.

Root plate stability is another interesting trait that he is looking at. Dyck has noticed that some roots are poor anchors, resulting in plants that fall over easily – not lodging – but falling over at the roots. He is experimenting with a fish scale to see how many pounds pressure it takes to pull out a mature plant by the roots to standardize a selection tool for this trait.

Dyck is also looking at other traits such as cold tolerance for early seeding, winter oats, and hulless oats all with an eye towards driving value to the entire oat industry.

“We have great genetic potential for high yielding oats if the right ingredients are there. So, we focus on how we can continue to add quality and genetic value for farmers, millers and consumers,” Dyck says.