Understanding fertilizer injury
Fertilizer injury can occur by two main mechanisms: ammonia toxicity and salt injury. Ammonia (NH3) toxicity occurs when urea [(NH2)2CO] is placed with or very near seed. During the urea breakdown process, ammonia is released near germinating seedlings, and high concentrations of NH3 near germinating seed can be very toxic. When soil moisture conditions are good, hydrogen (H+) ions from water (H20) will rapidly attach to ammonia to convert to ammonium (NH4-) which minimizes potential ammonia injury. The ammonium is then gradually converted to nitrate-N (NO3-) by soil bacteria for plant uptake. Ammonia toxicity is greater when: higher rates of urea are seed-placed, causing higher NH3 concentration levels; NH3 persists longer in soil which usually occurs when soil moisture is poor; NH3 persists longer in soil when soil pH conditions are higher (>7.5).

When seedbed soil moisture conditions are marginal or very poor, fertilizer salts become more concentrated in the soil solution. This results in a higher osmotic pressure, causing a greater potential for injury to germinating seedlings. Fertilizer injury is an increasing concern in drier spring soil moisture conditions immediately after seeding. Also, when soil temperature is cooler, roots grow more slowly, causing roots be exposed to the higher concentration of fertilizer for a longer period of time.

ESN (Environmentally Smart Nitrogen, 45-0-0), is a polymer-coated, slow release urea-N fertilizer that can be seed-placed at about three times the safe rate of conventional urea-N. When seed-placed, ESN is released slowly over about 60 days under normal soil moisture and temperature conditions. It is important to note that if the protective polymer coating is fractured, or granules are cracked or broken, the polymer-coated urea will convert to ammonia relatively quickly which would affect seed safety.

Safe seed-placed P, K and S rates
Phosphate is often limiting in most Prairie soils and often placed with or near the seed for best crop response. Phosphate fertilizer has a relatively low salt index (Table 1). Table 4 provides the safe seed-placed rates of P2O5 at a 10 per cent SBU for various crops as recommended by Alberta, Saskatchewan and Manitoba agriculture ministries. The recommended rates are somewhat different due to slightly different research results and interpretations. The safe rate for cereal crops is about 50 lb/ac of P2O5 for wheat and barley in all Prairie provinces. For canola, the safe seed-placed rates of phosphate at a 10 per cent SBU for Alberta, Saskatchewan and Manitoba are 15, 25 and 20 lb/ac of P2O5, respectively. In Alberta, injury has been observed at rates as low as 15 lb/ac of P2O5, therefore the recommended rate is more cautious compared to those for Saskatchewan and Manitoba. Conversely, recommendations for safe rates of P2O5 with peas are higher in Alberta versus Saskatchewan due to differences in observed field research trials.

When considering seed-placing other fertilizers, such as potassium or sulphate sulphur, very careful consideration is needed. Many farmers place phosphate with the seed and even some N fertilizer; therefore, great care is needed when considering the combined effect of seed-placed P coupled with K and/or S fertilizer. Remember, both 0-0-60 (potassium chloride) and 21-0-0-24 (ammonium sulphate) have a relatively high salt index per unit of nutrient (Table 1).

As a general rule, total pounds of (P2O5) plus total pounds of K2O should not exceed the maximum safe rate of seed-placed phosphate. For example, for cereal crops, the maximum safe rate is 50 lb/ac of P2O5. If 30 lb/ac of P2O5 is seed-placed with wheat, then an additional 20 lb/ac of K2O could be seed-placed safely. This rule applies only under good soil moisture conditions for cereal crops. The injury risk for canola and other small seeded crops is much higher. Often, the safest plan for small seeded crops is to seed-place the safe rate of P2O5 and side or mid-row band any K fertilizer away from the seed to minimize potential salt injury.

Sulphate-sulphur is the form of S taken up by crops, and it is the fertilizer form needed to correct S deficiency. Seed-placed SO4-S can be very beneficial for early crop growth and development when surface soil (0 to 6 inches) is low in plant-available sulphate. The maximum safe rate of SO4-S that can be applied with the seed for cereal crops with a 10 per cent SBU is 20 lb/ac of SO4-S, when phosphate fertilizer is seed-placed at a rate of 30 lb/ac of P2O5. For canola, the safe seed-placed SO4-S rate at a 10 per cent SBU should not exceed 10 lb/ac, if the seed-placed phosphate fertilizer rate is not more than 10 lb/ac of P2O5. Rates of seed-placed ammonium sulphate near or above 20 lb/ac of S have been shown to reduce the emergence of canola under some conditions.

For more detailed information, it is important to refer to your provincial agriculture ministry website, as well as to seek advice from knowledgeable, experienced soil and crop specialists. 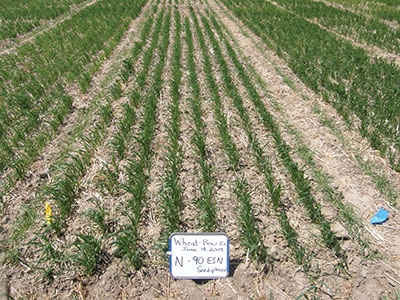 90 kg/ha (81 lb/ac) of N as ESN seed-placed with wheat on a Brown soil at Bow Island. Fertilizer research has shown clear benefits when modest amounts of some fertilizers are seed-placed.