How do you stack up against your peers in canola production? What are some of the key yield factors? Some of the answers can be found in a canola grower survey conducted during the winter of 2011-12 by Agriculture and Agri-Food Canada (AAFC) and the Canola Council of Canada (CCC). The objectives were to get a better understanding of the factors that contribute to canola yield, and to get a better understanding of canola management at the farm level.

“A lot of the factors are inter-related and production practices vary a lot from farm to farm, but we were able to determine some of the important yield factors,” says Elwin Smith, bio-economist with AAFC at Lethbridge, Alta.

For the study, an independent survey company contacted and asked 7,090 canola producers to participate in the survey. Of these, 1,329 met the criteria and were willing to participate. Almost 1,000 producers completed the survey, representative of the different canola growing regions in Western Canada.

Several key factors contributed to higher canola yields. Some positive yield factors, such as irrigation, good to excellent moisture during the growing season, and good to excellent temperatures during flowering wouldn’t come as a surprise to anyone. Other factors, though, illustrate the importance of using beneficial practices for high yield.

Soil tests and nitrogen rate
Smith accounted for the yield effect of nitrogen applied and rainfall in conducting the analysis to help tease out other important yield factors. The ratio of canola yield to nitrogen (N) use was about 2.1 to 2.4, except in Manitoba, where higher rates of N were applied to target higher yields. But in 2011, growing conditions weren’t favourable in Manitoba, resulting in lower yields and a higher ratio of 3.5.

Using a soil test to guide N fertilizer rates provided the best yield advantage, with 2.2 bushels per acre yield advantage over using past experience or past yields as a guide. The percentage of farmers using soil tests ranged from a low of 19 per cent in the Gray soil zone of Alberta to a high of 40 per cent in the Black soils of Manitoba.

“I was a bit surprised that more farmers didn’t use a soil test, but we aren’t exactly sure why they don’t. Is that an indication that they don’t have confidence in soil tests, or do they test some fields and then extrapolate those results to all their fields?” questions Smith. “That’s not to say experience and education aren’t valuable in doing the right thing, but the survey did show the benefit of using soil tests.”

If the cost of fertilizer was used to determine the amount of N applied, yield was 4.4 bushels per acre lower. Smith says that makes sense, because if cash flow was restricted, then higher N prices would mean lower N fertilizer rates and lower than optimal yield.

Seeding date
Early seeding has generally been accepted as the best practice for higher yield, as it helps the crop flower before the July heat waves. This was shown in the survey with a reduction of 3.6 bushels per acre in yield when the crop was seeded after May 22. However, in 2011, there was no yield difference found between seeding before May 8 and the mid-May seeding dates.

“Sometimes management decisions have to be made based on what is happening in the field rather than best practices,” says Smith. “Sometimes that is based on education, sometimes on experience.”

SURVEY RESULTS
The average yield across the sample of western Canadian producers surveyed in 2011 was 38.4 bu/ac.

About 40 per cent of producers used no-till/zero-till. However, this varied with those in Manitoba using mostly conventional and minimum tillage, to southwestern Saskatchewan with two-thirds of producers using no-till. Saskatchewan and Alberta growers had higher use of no-till.

Most of the canola in this survey was grown on cereal stubble land (land that in 2010 was in wheat, barley or oats). One-third of fields in this survey were seeded to canola in 2009, indicating a break of only one crop between canola crops. Eleven per cent of growers in the Gray soil zone of Manitoba grew canola on canola stubble in 2011. Twelve per cent of the canola was grown on summerfallow.

The majority of producers seeded with air drills, and of the air drills used, 94 per cent had a shank opener as opposed to disc opener.

The speed of seeding averaged less than five mph for air seeders and drills, but was at least five mph with disc openers.

Each field was sprayed in-crop about 1.5 times to control weeds. These passes were in addition to pre-seed burn-off spray passes. Many of these passes would have included a tank mix of herbicides, for example Liberty and a grassy weed control herbicide.

About 40 per cent sprayed fungicide, mostly in Manitoba.

Only four per cent of producers straight cut their canola, the rest swathed. About one-half of those who straight cut indicated they had a yield gain averaging 4 bu/ac. One producer with a loss reported the loss at 15 bu/ac, indicating losses have the potential to be high. 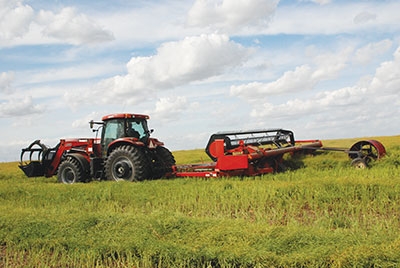 Growers who swathed based on seed colour had higher yields. How do you stack up against your peers in canola production? What are some of the key yield factors?