Mustard and lentil intercrop trials under organic management at SCRDC. Photo courtesy of the Organic Research Program at SCRDC.

Intercropping can increase the sustainability, resilience and profitability of organic production systems. Recent research shows that intercrops bring multipurpose benefits to organic systems, including extended benefits to the following crops.

“As part of a larger organic intercropping study, we wanted to take a closer look at the potential impacts of different intercrops on crop growth, yield and soil nitrogen (N), as well as root disease development and underground fungal pathogens, both in the intercrops and the subsequent sole crops,” explains Myriam Fernandez, research scientist at Agriculture and Agri-Food Canada (AAFC) and principal investigator and head of the organic research program at the Swift Current Research and Development Centre (SCRDC) in Saskatchewan. “Legumes have been the main source of soil N in organic systems, however increasing levels of legume root diseases and poor competitiveness may reduce the sustainability of this practice, therefore growers need to investigate other options such as intercropping and cover crops. We also wanted to know what the impact and benefits of the intercrops might be to the next crop, such as durum, beyond just yield and quality but also the carryover of pathogen inoculum particularly for diseases such as common root rot and Fusarium Head Blight (FHB).”

A three-year study conducted at AAFC Swift Current in the semi-arid region of the Canadian Prairies was initiated in 2016 to determine how intercropping a legume with a cereal (field pea-oat) or oilseed (lentil-yellow mustard) might impact grain yield and quality, weeds and crop diseases and the N benefit from the legumes. Durum wheat was seeded across all treatments in each of the subsequent years to determine its growth, pathogen carryover and disease implications, such as Fusarium species that can cause serious diseases such as FHB, root and crown rot. AAFC project collaborators included Prabhath Lokuruge, Lobna Abdellatif, Mike Schellenberg and Julia Leeson. 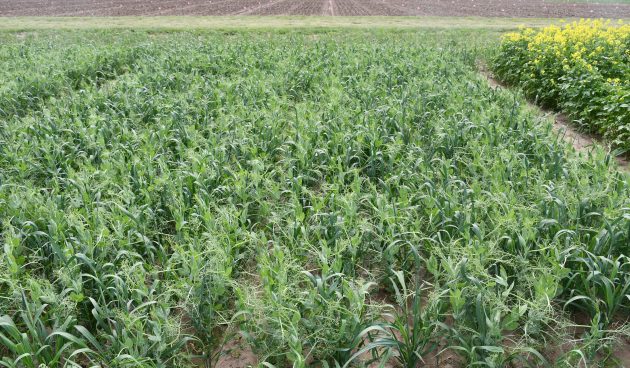 The biomass and grain yield in the durum wheat crop was higher following the pea-oat intercrop under organic management at SCRDC. Photo courtesy of the Organic Research Program at SCRDC.

“We have several significant findings from this project, even under the very dry conditions, but probably most surprising were the various extended benefits in the subsequent durum crop,” explains Fernandez. “Compared to the legume monocrops, growing a legume with oat or mustard resulted in a lower weed biomass and density and a lower seedbank, which was confirmed by the lower weed density in durum following these intercrops. The biomass and grain yield in the durum wheat crop was higher following the pea-oat intercrop compared to the lentil-mustard intercrops in most cases. The soil N, growth and yield of the following durum crop was similar after the forage pea green manure and after the pea-oat intercrop. This observation supports the “oat effect” our research group has been observing under organic management for a number of years, where oat in rotation can improve soil N, crop biomass and yield in the following crops. The impacts of oat on the following crop will be further explored in a newly-funded project, starting in 2022 at SCRDC. In comparison, the study showed that durum grain yield was lower after the lentil-mustard intercrops and the mustard monocrop, which suggests they were detrimental to soil N and the growth of the following crop.”

Fernandez emphasizes that on the other hand, the mustard intercrops and monocrops had a significant positive impact on fungal root diseases and show promise for helping to manage disease challenges in the companion legume and subsequent crops. The findings suggest growing mustard, or another brassica with similar properties, can help control Fusarium diseases in intercrops and subsequently-grown cereal crops. Intercropping with mustard at high rates resulted in lower root rot levels in the companion lentil crop caused mostly by Fusarium pathogens. Overall, Fusarium spp. had the highest proportion in roots of most intercrops, with levels of 73 per cent especially in oat and legumes. This higher level of disease in pea and oat intercrops is because both are hosts to the same Fusarium species, which can then be carried over to the following crops.

An important finding for wheat and barley concerns the significant change in the occurrence of common root rot, caused by the pathogen Cochliobolus sativus (=Helminthosporium sativum), in the subsequent durum crop. In addition to seedling blight and root/crown rot in wheat and barley, this pathogen causes leaf spots, black point and dark smudge in seed, and thus can reduce yield and quality. “The C. sativus pathogen, which has very thick cell walls and persists in the soil for a long time, is more prevalent in organic systems, and common root rot is usually more severe under dry conditions, high temperatures and low N levels,” Fernandez explains. “None of the intercropped crops in this study, including oat, are good hosts to this pathogen, which would explain its low levels in the following durum wheat, suggesting that intercrops might be another tool for managing root rot pathogens in wheat and barley.”

Researchers also identified some Fusarium species and fungi in the study that are weak pathogens or saprophytes, some of which could also provide biocontrol of diseases. These and several of the potential biocontrol fungi successfully identified in this study have been studied by the SCRDC Organic Research Program in the last few years in the lab, greenhouse and field, not only for their ability to control Fusarium pathogens, but also other root pathogens such as Aphanomyces euteiches, responsible for Aphanomyces root rot in legumes, and their potential growth promoter ability. All these biocontrol fungi have been shown to be more abundant in organic than non-organic systems, where they can be suppressed by synthetic fungicides, or otherwise affected by other chemical inputs. Some of the biocontrol fungi such as Clonostachys species, including C. rosea, are endophytes able to also promote plant growth and drought tolerance. A mycoparasite biopesticide, Clonostachys rosea ACM941, developed by AAFC scientist Dr. Allen Xue, has demonstrated efficacy for the control of FHB in cereals and root rot suppression in soybeans. In Canada, after more than 10 years of research, two strains of C. rosea are being considered for commercialization by a private company.

“In our study, we found that non-legume crops provided the highest microbial diversity in the mixtures, which was also higher than in their respective monocrops,” Fernandez explains. “Some of the isolated micro-organisms are known for their biocontrol potential. We also found less root rot and higher levels of biocontrol fungi in durum after mustard and its intercrops with a high ratio of this crop. Impacts on Aphanomyces root rot could not be determined in this study given that the dry weather was not conducive to its development. Under organic systems, promoting the natural presence of Clonostachys species and other biocontrol organisms might provide disease control, and also promote crop growth and improve drought tolerance.”

Designing intercrops and crop strategies to take all of these different considerations into account can bring multiple and extended benefits to the cropping system. “Our study has allowed us to understand intercrops and their multiple impacts better, which is expected to help in their design. Each intercrop combination is unique, and it is important to consider the tradeoffs of growing different species and how to remediate any impact,” Fernandez says. “Understanding that oat intercrops contributed the most to soil N and resulted in the greatest productivity in the following durum wheat, similar to an oat monocrop and green manure legumes, is very important to sustainable crop production under organic and low-input management. Organic and low input growers would also need to plan for remediating the lower soil N in the next crop after mustard and its intercrops and a green manure could be an option, while conventional growers could remediate through their fertilizer management strategies. This study also showed that intercropping provides other economic and environmental benefits such as protection against failure of legumes, particularly under very dry or excessively wet conditions.

Other factors such as disease and pathogen carryover will be important and just selecting two different species in two different functional groups doesn’t mean there will be lower disease. Planting companion crops with allelopathic properties such as mustard could be considered when planning intercrop mixes to manage weeds and disease but also to increase beneficial fungi that provide biocontrol of diseases and might promote plant growth. All of these different considerations should be considered when making decisions, at least for this environment, regarding the best intercrop combination not only for crop growth and productivity but also for disease control in the intercrop year and following season.