Wild oat is one of the most widespread weeds on the Prairies. On top of that, many wild oat populations are resistant to one or more herbicide groups. Herbicide-resistant weeds can cause serious problems for growers such as increased herbicide costs, lower crop yields, loss of herbicide options and/or loss of preferred crop options. So two researchers offer some tips on how to delay the development of herbicide-resistant wild oat.

Next up could be glyphosate-resistant wild oat. “Based on our model simulations, wild oat is flagged as a high-risk weed to develop glyphosate resistance based on the glyphosate selection pressure on the weed. So we do expect to eventually find wild oat populations that have evolved resistance to glyphosate. If that comes to pass, then that will open a whole new can of worms in terms of trying to manage this problematic weed,” Hugh Beckie, an expert in herbicide resistance with Agriculture and Agri-Food Canada (AAFC) says.

Beckie leads surveys of herbicide-resistant weeds on the Prairies every few years. The latest survey started in 2014, so it will be a couple of years before it is completed. However, based on the trends in the first two surveys, one in the early 2000s and the other from 2007 to 2009, he expects to see continued increases in the numbers of herbicide-resistant wild oats.

He says, “If you don’t have resistant wild oats, you’re in a minority on the Prairies right now. The majority of annually cropped fields have wild oats that are resistant to one of the main herbicides.”

Wild oat seems to have a talent for developing resistance. “It’s the second-most abundant grass weed, after green foxtail, on the Prairies. When you have high numbers, there is a greater incidence of the naturally occurring resistance mutations in the population, just based on sheer numbers,” Beckie explains. “As well, because of the abundant populations, most growers usually have to apply a pre-seed and/or an in-crop herbicide to control wild oat.”

Wild oat has several characteristics that help it generate such high populations. “It is very well adapted to our growing season. It is a prolific seed producer; one plant will produce over 150 seeds. It is very weedy in terms of seed shatter, which is a way of replenishing the seed bank,” Beckie says.

“Wild oat seed can be dormant in the seed bank for up to three to five years. So even if you control it one year, when it is released from dormancy later on, you get flushes of wild oat coming up that usually require further herbicide control. It will keep coming up in future years until you actually drive that viable seed bank down to low levels,” he adds.

Wild oat also fits snugly into common Prairie crop rotations. “I think the main reason that wild oat is so successful is because it’s a summer annual weed and we persist in growing summer annual crops over and over and over again. Barley, canola, wheat, peas – they are all summer annuals,” Neil Harker, an AAFC weed scientist, says.

With all those factors favouring wild oat, it is no wonder that it is one of the most economically important annual weeds on the Prairies.

Beckie’s data show just how costly herbicide-resistant wild oat can be. When his team surveys a grower’s field, the grower also completes a survey. Based on the grower survey results from 2007 to 2009, Beckie estimates that herbicide-resistant weeds on the Prairies cost farmers between $1 billion and $1.5 billion dollars annually due to increased herbicide use plus crop yield loss or quality loss. The majority of that cost is due to wild oat, because the weed accounts for over three-quarters of the herbicide resistance cases on the Prairies.

And that cost will likely increase over time as wild oat resistance problems grow.

Beckie adds, “Another important factor is whether growers will still have herbicide tools to control this weed in the future. We hope we don’t get to that point, but that might happen sooner than later.”

Tips to delay resistance
To delay the development of wild oat resistance, the key is to reduce herbicide selection pressure. Harker identifies two basic approaches to do that.

“One obvious approach is to use herbicides less often. For instance, if you’re worried about wild oat developing resistance to Roundup in the future, then rather than using two applications of Roundup in canola, you would just use one, or rotate to a different herbicide such as Liberty [Group 10] or the Group 2’s from Clearfield.

Harker has conducted various studies over the years that show the effectiveness of such cultural strategies. Most recently, he led a five-year study from 2010 to 2014 to evaluate the effects of diverse cultural strategies in reducing selection pressure for wild oat resistance to herbicides.

That study took place at eight sites from Alberta to Quebec. The treatments compared a dozen different canola rotations ranging from two-year rotations like canola-wheat and canola-barley, to more diverse summer annual rotations like canola-barley-pea-wheat, to rotations that included fall-seeded cereals, early-cut barley silage or alfalfa. The treatments also compared recommended seeding rates to doubled seeding rates for some of the cereals, and evaluated 0, 50 and 100 per cent of the recommended rates for wild oat herbicides.

The study’s results showed a number of ways to manage wild oat without increasing the herbicide selection pressure. “Higher seeding rates work really well,” Harker says. “Different seeding dates are also very effective. For example, fall-seeded crops such as winter wheat and fall rye are very competitive. They are up so early that they get ahead of the wild oats. In fact a lot of people grow these crops because then they don’t have to use a wild oat herbicide.”

Harker’s study also showed that having crops like alfalfa, high-seeding-rate winter cereals or high-seeding-rate early-cut silage in the rotation provided good control of wild oat without any wild oat herbicides. In some cases, such rotations were as effective in controlling wild oat as a canola-wheat rotation with full herbicide rates.

Including about three years of alfalfa in a rotation is effective because the crop emerges before wild oats, plus the harvest timings prevent wild oats and many other weeds from setting seed. Similarly, early-cut silage is cut before the wild oat seeds are viable.

“Other effective cultural management strategies include some of the old things we used to have to do for wild oat control, like planting a crop where you can delay the seeding date so that you can let the wild oats come up and either till them down or spray them with a non-selective herbicide before you seed. For example, if you have the opportunity to grow barley silage, you could seed it a little later, and let the wild oats come up and kill them first,” Harker says.

Beckie adds, “For delaying weed resistance in general, good agronomic practices, like bumping up cereal crop seeding rates and banding fertilizer for preferential crop access, are important. Getting a competitive crop stand is the key to get the crop ahead of the weed.”

Harker highlights examples from other regions where crop growers are struggling to deal with herbicide-resistant weeds, like Australia, where rigid ryegrass is now resistant to 11 different herbicide modes of action; and the southern U.S., where cotton growers have glyphosate-resistant Palmer amaranth, which was their number one weed even before it developed resistance. Facing such problems, growers have to implement more complex weed control strategies that may include tillage, “older” pre-emergence herbicides, and non-chemical options, like harvest weed seed control, weed-suppressive cover crops, and hand-weeding to remove weed escapes. 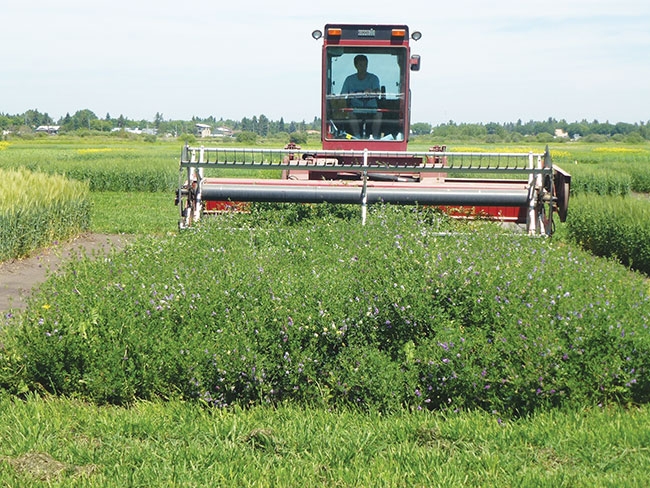 Two growing-season cuts from alfalfa prevent wild oat from producing viable seed. Wild oat is one of the most widespread weeds on the Prairies.