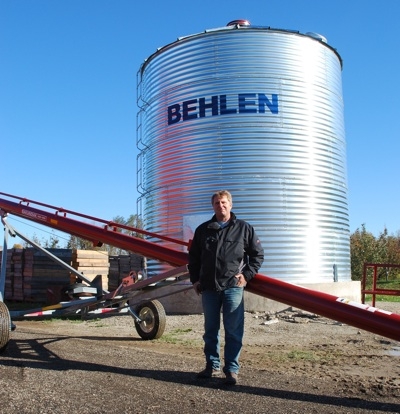 Farming has become a lot easier for Harley Dec. 8

Timing can be everything, whether it comes to farming, or as in the case of Rob Geier, when it comes to participating in contests.

To say that he is focused more on the business of farming than on winning contests is a bit of an understatement. Geier, who farms near the hamlet of Harley, Ontario, just west of Brantford, runs a very diverse operation when it comes to what is grown on his farm. For the past few years, his line-up has included gingseng, strawberries and apples, plus a variety of vegetables and row crops.

“We started out about 17 years ago, just growing ginseng, and that, I manage for Canadian Imperial Gingseng,” explains Geier. “Then I diversified because ginseng requires land to be prepped, so I started growing some cash crops ahead of it, to control the land, and build it up and clean it up.”

“And a lot of that is because the ginseng is stable,” he says. “I used to grow a lot of vegetables, but now, I’m quitting the vegetables; that’s it.”

For the next few years, Geier will continue with strawberries, but plans to cut back in light of cheaper imports of berries from the US, where growers there are just trying to dump their product below the cost of production.

“Then I’m just going to concentrate on apples and cash crops,” states Geier. “Even with the ginseng, I’m going to start setting myself back away from its management, because I’m getting older and I want to do my own thing.”

Timing really is everything

As for the timing issue, in light of his decision to simplify his farming operation, entering Top Crop Manager’s Harvest Ready Contest with Behlen Industries and Sakundiak Equipment, could not have come at a better time, mostly because he won this year’s grand prize. Early in the fall, Geier watched over the installation of a Behlen grain bin on his operation, and took delivery of a Sakundiak grain auger, as well.

“When I was losing money on the strawberries, this win came in nicely, and the cash crops did so well this year, I decided I might as well concentrate on something I can store,” relates Geier, with a smile. “Because strawberries you can’t store very well, but grains you can store for about a year, or longer.”