Soybeans generally require a warmer, longer growing season to reach maturity. Temperature tends to be a major limiting factor, with more suitable areas in Manitoba considered mainly to be to the south-central area of province. However, variety trials and new research are showing some success in non-traditional soybean growing areas in Manitoba.

Soybean variety trials have been conducted across Manitoba for the past 10 years. These trials, managed by Manitoba Agriculture, Food and Rural Initiatives (MAFRI), are located at sites with contrasting climates across the range of growing areas in Manitoba.

“By 2009 and 2010, they started seeing some of the different cultivars, particularly the early maturing ones, doing quite well in places they weren’t expecting,” explains Dr. Aaron Glenn, research scientist with Agriculture and Agri-Food Canada (AAFC) at the Brandon Research Centre. “However, the results were variable and inconsistent. This led to several questions about what was going on, whether it was microclimate or soils or day length or other factors.”

A three-year study led by Glenn and funded by the Manitoba Pulse Growers Association was initiated in 2011 to try to answer some of these questions and to determine what factors were affecting maturity and yield. Currently, varieties are rated on corn (or crop) heat units (CHU) for suitability to growing areas. CHU is calculated from the daily maximum and minimum air temperatures and takes into account that the crop responds differently to daytime and nighttime temperatures.

“Unfortunately, as a scientist studying these factors, CHUs are not really the best thing for predicting soybean or even corn maturity on the prairies,” says Glenn. “The CHUs were developed in southern Ontario and Iowa in the 1960s, and their use has been expanded to be used everywhere. Although the CHUs are correlated with time and heat units, the climate on the Prairies is quite different than southern Ontario. On the Prairies, the climate is often drier, there are bigger differences between nighttime and daytime conditions, and differences in day length from south to north are a factor. The answer is much more complex than just CHUs, which is what we are trying to determine in this study.”

Glenn’s objectives for the study were to look at relating different methods of thermal time, such as growing degree days and CHU, to the yield and quality of soybeans across the different areas of Manitoba. “We also looked at relating thermal time or heat units to growth stage observations at each location,” says Glenn. “At each site, technicians assessed the crop growth stage on a weekly basis, including vegetative (V) and reproductive (R) stages. We could then relate the impact of various factors such as heat units, day length and beta functions on time of flowering, maturity and other parameters. We are also including a photo thermal model, which looks at the combined effect of factors such as day length or photoperiod with temperature, to determine which one is most important in Manitoba.”

In the study, three recommended varieties of soybeans, one short-season and two longer-season, were grown at eight locations across Manitoba for three years. Although newer varieties became available over the course of the study, the same three varieties were used throughout the study. All locations were generally planted around May 15, plus or minus five days.

“One novel aspect of the study was the addition of microclimate measurements and weather stations located at each location beside or in the plots,” explains Glenn. “These stations were expected to provide a better measurement of the heat units right at the location rather than relying on Environment Canada stations like we typically do, but can be up to 50 kilometres away from the site. This information is important for relating the various factors and making comparisons. From the preliminary results, they compare fairly well and it isn’t expected to be a big issue, but we don’t know for sure yet.”

To emphasize the effect of factors beyond CHU, Glenn notes that previous soybean transplant studies confirmed that conditions beyond CHU have an impact on growth and maturity. Glenn explains that in these studies, northern, or shorter-season, varieties were planted in Mississippi, and southern, or longer-season, varieties were planted in North Dakota. As expected, the southern varieties planted in the north did not flower and pod in time for harvest, while the northern varieties planted in the south started flowering much too early because the days are shorter earlier.

So although Roblin isn’t considered to have enough heat units, all of the varieties performed fairly well. Glenn is wondering if it may be because Roblin has more precipitation, or it may be related to the total day length and factors such as how fast the days shorten during the growing season. One factor may be that conditions at the Roblin location may trigger reproductive growth quicker than other places because shortening day length starts the flowering process.

The final project results are expected early in 2014, so Glenn emphasizes the results to date are very preliminary and the outcomes could change depending on year three results. At press time, the 2013 crop and the final crop of the study was still standing in some of the locations, but was expected to be harvested by early November.

“We expect the 2013 year to provide interesting data as planting was late, particularly in the western parts of Manitoba,” says Glenn. “The weather was very cool early in the season and although the crop looked good by the end of July, it was behind and the possibility of a frost at the end of August or early September could have impacted maturity. However, late-season heat combined with a delay in frost until the first week of October meant the crop did mature and we look forward to the final harvest results.”

Frost affects soybean quality; however, after a certain stage – usually R7 – the frost won’t hurt the crop as much even with a few green leaves still on the plant.

In 2011 when the study was initiated, the Red River Valley and Morden areas were the only areas where soybeans were expected to grow and mature in Manitoba and the only areas covered under crop insurance. In 2013 on a trial basis, crop insurance was expanded across Manitoba for soybeans (coverage in new areas at 80 per cent of the lowest coverage in the existing insurable area for that crop). The findings of the variety trials, this project and other projects are providing information to assist with these types of decisions.

“The message from crop advisors and extension specialists continues to caution growers thinking of growing soybeans to really do their own research on varieties, ask where the trials were done and find out if they actually matured and produced in their local area,” explains Glenn. “There are several new varieties coming out suited to different areas, but selection is more complex than just looking at a CHU rating and a recommended area. Our preliminary results are showing that factors such as day length, moisture, timing of frost and other factors can impact soybean maturity and yield. We expect more results when the final report is complete.” 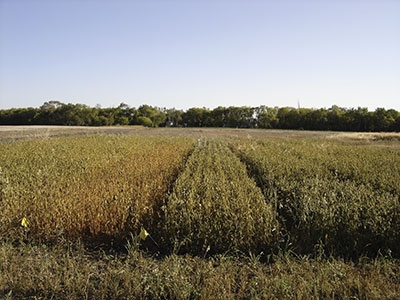