It’s enough to strike fear into the heart of a weed scientist. When Bob Blackshaw, weed scientist with Agriculture and Agri-Food Canada (AAFC), took a call from a farmer near Milk River, Alberta, in the summer of 2011, what he heard sounded suspiciously like Western Canada’s first case of glyphosate resistance.

Now known by its generic name, glyphosate, Roundup was introduced by Monsanto in the mid-1970s. A broad-spectrum systemic herbicide, Roundup offered a relatively low toxicity, was highly effective and quickly adopted by farmers. When it came off patent, other companies began marketing glyphosate.  Now less costly, it became even more heavily used.

Blackshaw was aware of kochia resistance to glyphosate previously confirmed in the United States, and, based on what the farmer said on the phone, he “thought this could be real.” He contacted colleague Hugh Beckie, AAFC research scientist based in Saskatoon, and the pair went out to investigate three farms in the Milk River area. All were chemfallow fields, and all weeds were under control save one: kochia.

“Kochia is a tumbleweed species where the stem breaks off at ground level and rolls with the wind across the field spreading seed,” says Blackshaw, adding that often, you will see a trail of kochia in the direction of the prevailing wind. Similar circumstances had been documented in some fields in Kansas.

Blackshaw collected live kochia plants, brought them back to the greenhouse and potted them to produce mature seed. Those seeds were planted, grown and sprayed with nine different rates of glyphosate. Kochia from all three fields was found to be resistant to glyphosate. Additionally, in the fall of 2011, kochia plants were collected from 46 sites within a 20-kilometre radius of original populations. Seven of the 46 sites were glyphosate resistant.

In April 2012, glyphosate-resistant kochia was confirmed in the Turin, Alberta, area. Blackshaw says that by the summer of 2012, eight suspected kochia populations, including some from the Brooks/Medicine Hat area, were delivered to AAFC’s Lethbridge Research Centre for testing.

Globally, glyphosate resistance is a relatively recent problem; Blackshaw says most of the resistance has emerged within the last 10 years. “While not a new phenomenon, it’s new to us, and it’s a wake-up call for producers,” he notes. “Now that it’s here, one of our first goals is to create grower awareness.”

Four suspected populations have also been collected from chemfallow fields in southern Saskatchewan. Blackshaw says it’s “highly likely” there are glyphosate-resistant weeds there, though it hasn’t been confirmed yet. Tests will be completed early this year.

Growers want to know what can be done, but for now, there aren’t too many answers. “We don’t really have definitive solutions at this time,” says Blackshaw. “We are able to make some preliminary suggestions on alternative herbicides that farmers may want to consider. Beyond that, it is more a case of knowing what integrated control practices work for weeds in general.”

“But we are not there yet,” notes Blackshaw, who adds there is a critical need for proactive resistance management in Western Canada. “We are currently writing research proposals to funding agencies to conduct this research, and those funding levels will determine what we are able to proceed with.”

These are early days for glyphosate resistance challenges in Western Canada and Blackshaw stresses scientists will be going hard at it for the next three to four years. “There are 24 glyphosate-resistant weed species in the world, and now that resistance is spreading, it just makes you nervous,” he says. “We might have some guesses about what weed species may be next. But in the end, resistance is always identified at the farm level. You can’t do a whole lot proactively to identify the next resistant weed.”

For more information on assessing the risk of developing glyphosate resistance on your farm, go to www.weedtool.com. 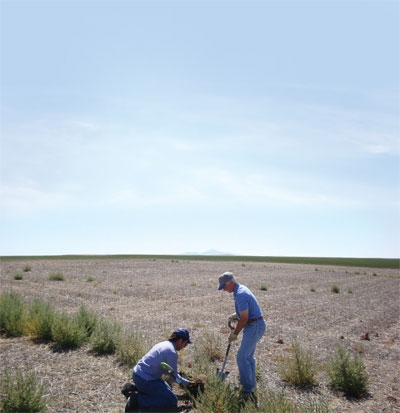