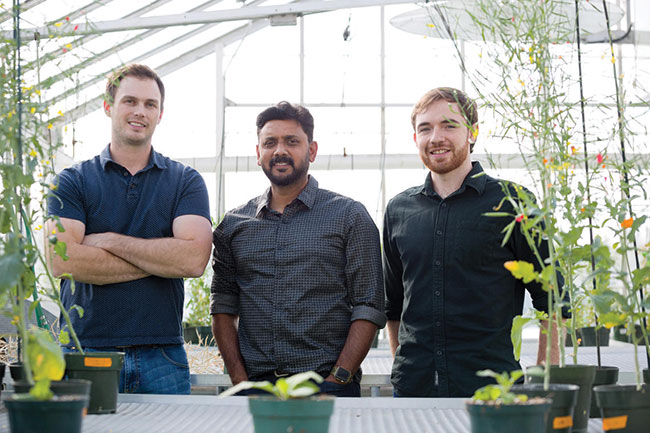 It happens every year: harvest frost. In 2020, that was Aug. 29 for some, and more widespread on Sept. 7 or 8 for other parts of the Prairies. And with the frost comes green chlorophyll that is locked into the seed of immature canola plants.

“We’ve been able to create canola lines that can de-green properly,” says Marcus Samuel, professor of integrative cell biology and the director of the greenhouse in the department of biological sciences at the University of Calgary.

In the early 2010s, Samuel investigated molecular pathways for seed de-greening in Arabidopsis. Arabidopsis is a model plant that researchers use to study plant biology. It is a member of the Brassicaceae family and a close cousin of canola.

In this research, Samuel found a “master regulator,” a transcription factor called ABI3 (Abscisic Acid Insensitive 3). It is a protein that controls chlorophyll breakdown and seed maturity. He found that genetic manipulation could overexpress ABI3 in Arabidopsis plants, resulting in improved de-greening of the seed.

Samuel found that the green colour was fixed into the Arabidopsis seed after a two-hour frost of -5 to -10 C per day for one, two or three days. When the ABI3 gene was overexpressed in Arabidopsis, the plants were able to tolerate a frost better and continued to de-green the seed after the frost.

Moving into canola
Subsequently, Samuel, PhD student Logan Skori and MSc student Mendel Perkins (now a PhD student at the University of British Columbia) investigated whether the same results could be achieved in canola. Using transgenic techniques, they developed two transgenic lines of Westar canola with the overexpressed ABI3 genes. The lines were exposed to six hours of frost at -4 C 24 days after transplanting (greenhouse), then allowed to mature under normal conditions. These two lines were compared to Westar canola without the overexpressed gene. The two transgenic lines had 50 to 60 per cent less chlorophyll than the regular Westar canola at maturity.

“These results provide strong evidence that higher expression of ABI3 can promote seed de-greening following frost exposure,” Samuels reported in a Brief Communication article in the Plant Biotechnology Journal in 2020.

PhD student Neil Hickerson looked at oil quality of the modified canola plant lines. He found the transgenic lines had increased levels of nervonic acid, a fatty acid important for brain health. The plants also had higher levels of oleic acid compared with linoleic acid. These changes, although relatively minor, could allow higher temperature cooking and improve the stability of the canola oil for storage.

While overexpression of ABI3 was successful in the transgenic lines, the problem is that this approach would categorize the canola as a genetically modified organism (GMO).

“We export 90 per cent of our canola and the countries that import our canola have big issues with new transgenes,” Samuel says.

To get around this barrier, Samuel’s research group is looking at non-GMO technology that would knock out the negative regulator of the ABI3 expression in the canola plant. This would automatically result in an up-regulation of ABI3, providing the same result.

Samuel has received a collaborative research and development grant from the Natural Sciences and Engineering Research Council of Canada (NSERC) and is partnering with Nutrien and Frontier Agri-Science Inc. to develop the technology.

This non-GMO approach could be relatively simple and inexpensive to incorporate into canola hybrid lines, Samuel says, while being acceptable to canola importers and consumers. He hopes commercial frost-protected seed lines will be available within five years.


Related
Crushing the green seed problem in canola
Researchers strive to develop drought-tolerant canola
What to consider when marketing green seed canola
What causes some soybean plants to remain green?