Recent Alberta research shows that some wheat cultivars have a higher respose to more intensive agronomic management practices than others. This type of cultivar-specific information could help growers make more informed decisions on variety selection and management. 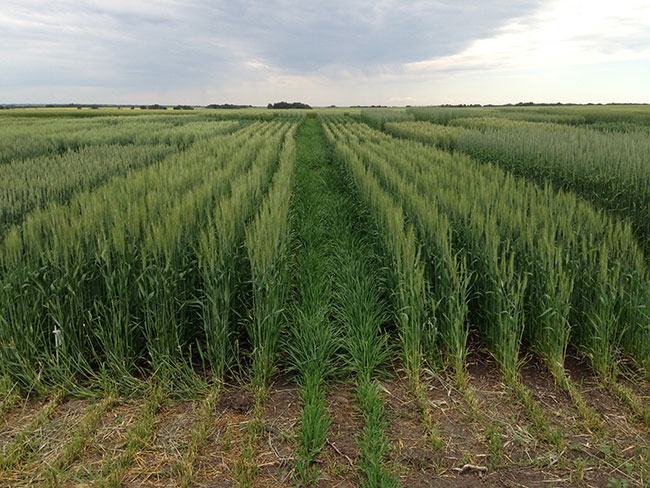 This site was part of a three-year Recent Alberta research

It opens up exciting possibilities for improved input use efficiency, so producers could get a bigger bang for their buck when investing in inputs.

Alberta findings
Sheri Strydhorst, research scientist with Alberta Agriculture and Forestry, led this multi-cultivar wheat research. Her interest in this issue began a few years ago, when some anecdotal hints suggested some wheat cultivars might respond differently than others to intensive management.

“The Wheat 150 field-scale trials [which assessed the effects of intensive management practices on wheat yields] were showing that the CPS [Canada Prairie Spring] class of wheat was responding really well, but we had heard that the CWRS [Canada Western Red Spring] class was not responding nearly as well,” Strydhorst says.

“The other thing that really put me on to this was when we were approached by a company with some European special purpose cultivars. In some trials those cultivars were performing just average with everything else. But when extra management was applied to those cultivars they performed and yielded like crazy.”

In 2013, Strydhorst and her team did some preliminary trials and found there might really be something to this concept.

The advanced practices included: a plant growth regulator (chlormequat chloride) at the recommended timing; an extra 34 kilograms of nitrogen per hectare with urea ammonium nitrate (UAN) with Agrotain nitrogen stabilizer applied at the end of tillering; and two fungicide applications (pyraclostrobin + metconazole at flag-leaf, and prothioconazole + tebuconazole at heading).

“We had 15 site years of data over three growing seasons with sites down in southern Alberta up to the Peace Region. So we had a great diversity of growing environments, and growing season precipitation ranged from four inches to about 20 inches. We would naturally expect big differences under those conditions,” Strydhorst explains. “In a dry year, like we had in Falher in 2014 with four inches of rain over the growing season, nothing responded to anything because the rain was the limiting factor, whereas in Bon Accord in 2016, we had 14 inches of rain that was really well-timed and all cultivars responded. So at the extremes, as farmers would probably expect, in a drought year it doesn’t matter what you do and in a wet year you’ve got to put the extra management in.”

The results got very interesting when the growing conditions were between those extremes.

It’s not clear why the responses differ from one cultivar to another. Strydhorst thinks in some cases the variety’s age might be a factor. “The new genetics may have disease resistance built into them, and that resistance is relevant for the pathogens out there today. A cultivar bred 20 years ago might have had some disease resistance but it is not relevant for the pathogens we have today.” So a newer variety might have smaller responses to a fungicide than an older variety. However, this doesn’t explain all the differences in the cultivar responses.

Implications for Alberta growers
Strydhorst sees a strong potential for growers to improve their input use efficiency by managing their crops on a cultivar-by-cultivar basis because they could apply just the right amount of inputs. For example, if a variety is unlikely to respond to extra nitrogen, then growers could save time and money by not applying extra nitrogen. That would also reduce the risk of nitrogen loss to the air and water. She adds, “This type of very responsible input management could also be a real opportunity for telling our social licence story.”

But how do Alberta wheat growers get this type of information? “For the cultivars where I have done the research, I’ve prepared a ‘recipe sheet’ that gives the cultivar, how many times we saw a response and to which of the factors we think we are getting a response, whether it’s the plant growth regulator, the extra nitrogen or the foliar fungicide,” Strydhorst says.

For varieties that aren’t covered by her recipe sheets, she suggests growers could consider having some strips in their field to compare the variety’s performance with and without an input, such as a fungicide application.

Information in the provincial seed guide could also help. “Let’s say the growers look at the leaf spot ratings. A cultivar with a moderately susceptible (MS) rating will likely respond to a fungicide more than a cultivar with an intermediate (I) rating,” she says. “But I don’t think growers can rely exclusively on that because they have to factor in the weather and the conditions on their farm – have they grown a tight wheat rotation so they might have more disease inoculum and things like that.”

Another option would be to modify Alberta’s variety trials to provide some of the data. For instance, Strydhorst notes that Ontario’s cereal variety performance trials compare cultivar responses with and without fungicide applications.

She thinks more research needs to be done to determine optimal nitrogen fertility rates on a cultivar basis. she is also involved in further research to figure out which cultivars are the most responsive to PGRs.

One key challenge in her research is to figure out which new cultivars to evaluate. “If we could look into a crystal ball and see which newly registered cultivars have the potential for big acreage, then as seed is being multiplied for commercial use, I could start doing some of this research to help give growers some of that information.” In the future, Strydhorst says her vision “would be when growers buy seed from their certified seed provider, they would also get that recipe book that would say, for instance, this cultivar responds 80 per cent of the time to a late fungicide application but it doesn’t respond to fertilizer plus soil test rates over 100 pounds of nitrogen per acre. It would be fantastic if we could eventually get there. But we have a long way to go, and it will need many players coming together to make that happen.”

A similar group of agencies, as well as breeders and other researchers, might also have an interest in some form of data collection on cultivar-specific responses to intensive management. Producer groups and government agencies would have a stake in this work because it could improve input management, which could benefit growers and the environment. The input companies would be able to provide better information to their customers. For instance, the company that produces the PGR used in Strydhorst’s project has already begun testing the PGR on different wheat varieties so it will be able to tell growers where the PGR would be most effective.

Cultivar-specific management data could be a powerful tool for Alberta wheat growers. Although more work needs to be done to provide this information to growers, Strydhorst’s research has achieved some crucial steps forward.