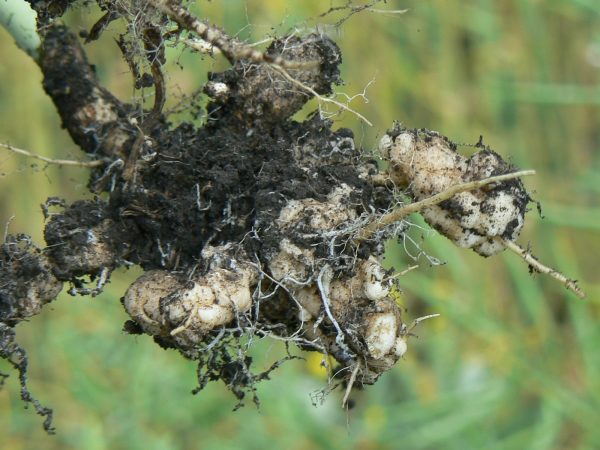 It’s been 17 years since clubroot, caused by Plasmodiophora brassicae, was first discovered in Sturgeon County, Alta. Since then, clubroot has been found in more than 3,000 fields across Alberta (2019), with incidence levels ranging from below 30 per cent (low) to above 70 per cent (high). It has also been identified in Saskatchewan and Manitoba, although not at the same frequency or intensity as in Alberta.

Research dating back to 2003 set the foundation for today’s clubroot management practices. The focus has been on not only preventing the introduction of contaminated soil, but also the potential of biofungicides/fungicides, and how variety resistance and crop rotation could help manage the disease.

About a decade ago, a lot of research focused on fungicides and seed treatments. The fungicides Allegro and Omega (fluazinam) and Ranman (cyazofamid) were not effective when applied in-furrow at 500 litres of water per hectare in research conducted by Gary Peng with AAFC Saskatoon. Ranman was most effective on canola when incorporated into the soil prior to seeding, but was only effective at low to moderate inoculum pressures. Similarly, Allegro/Omega were effective only under low inoculum pressure.

Terraclor 75% WP (Pentachloronitrobenzene; PCNB), when incorporated into soil before seeding, reduced clubroot severity more consistently than other fungicides in heavily infested fields. However Allegro, Omega and Ranman are too expensive for commercial use at the rates tested, and use of PCNB is restricted due to health concerns.

Research also found biofungicides to be ineffective. The biofungicides Serenade (B. subtilis) and Prestop (Gliocladium catenulatum) suppressed the disease on canola under greenhouse conditions. However, granular and seed-treatment formulations were not effective when applied in the seed furrow to high P. brassicae resting spore populations in the soil.

Biofungicides were also assessed as a seed dressing. Two seed treatment formulations of B. subtilis were evaluated in greenhouse studies. Serenade was applied encapsulated on the seed, and Kodiak (B. subtilis) was applied to canola seed with a commercial seed-treatment formulation, both to a susceptible canola variety. The seed treatments were moderately effective at the lower inoculum rate (10,000 spores per cubic centimetre of soil, or spores/cc), but ineffective at the higher rate (100,000 spores/cc).

In another greenhouse study, the biofungicide Serenade was applied to susceptible (S), moderately resistant (MS) and resistant (R) canola varieties exposed to an extremely high dose of P. brassicae inoculum (approximately 100 million resting spores/cc). The biofungicide substantially reduced clubroot severity on S and MR varieties relative to non-treated controls. On the R variety, the symptom on non-treated plants was negligible under controlled conditions and application of the biofungicide did not reduce the disease level any further.

To validate these greenhouse results, field trials were carried out at three locations in 2010. The canola varieties “45H26” (S) and “45H29” (R) were seeded in heavily infested fields near Leduc and Edmonton, Alta., and Normandin, Que. A granular formulation of Serenade was applied in-furrow with the susceptible and resistant varieties. Synthetic fungicides fluazinam and cyazofamid were also compared as seed treatments. None of the biofungicide or synthetic fungicide formulations reduced the Disease Severity Index (DSI) on S or R varieties in the field trials.

These results of biological and chemical control disappointed the researchers, as they looked reasonably effective in greenhouse trials but rarely showed sufficient efficacy under field conditions.

The most effective management strategy was found to be growing a resistant variety in a rotation with at least a two-year break from canola and other Brassicae crops. The basis for this recommendation is a study carried out at the Normandin site to assess the impact of length of cropping rotation (zero-, one-, two-, three- or four-year break from canola) on S, MS and R canola varieties (Peng et al., 2015).

Growers are also encouraged to scout for the disease, control host weeds and use patch management strategies to keep the spores from spreading throughout a field. For growers who don’t have clubroot on the farm: prevent introduction of contaminated soil onto your fields, if at all possible.