Features Agronomy Soybeans
Crop injury: how often and how bad? 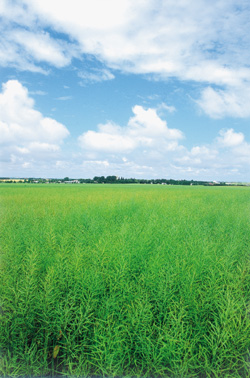 How much crop injury can a plant sustain without it impacting yield? In successive
years of weather extremes, insect pests and diseases, there are concerns that
crop yield loss due to crop stress is becoming more widespread. A desire for
quick and easy solutions has frequently resulted in mis-diagnosis of herbicide
injury.

There are those in various segments of the industry who point to a number of
considerations to keep in mind.

Dr. Peter Sikkema, an assistant professor in field crop weed management at
the Ridgetown College campus of the University of Guelph, points to a variety
of conditions that can lead to crop injury resulting from herbicide applications.
Extremes in weather tops his list, with soil characteristics, application errors,
planting problems, interactions with other chemistries, herbicide carryover
and sensitivity in varieties following in order.

Weather extremes rank first, simply because growing seasons in Ontario have
seen extreme conditions in six years dating back to 1999. “Too much rain,
too cold and wet, or too hot and humid, may lead to herbicide injury,”
says Sikkema. He adds heavy rainfall shortly after application can move the
active ingredient into the seed or the root zone. “This may result in greater
uptake and crop injury with herbicides such as Banvel, Prowl or Converge in
corn.”

In the case of cold and wet conditions, if they occur after planting, emergence
and plant growth can be delayed. “That can lead to greater crop injury
since the plant relies on its metabolic process to break down that herbicide,”
explains Sikkema. 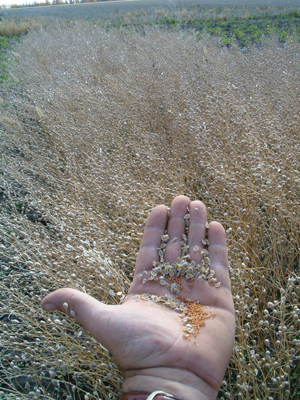 While weather extremes rank high on his list, Sikkema notes soil conditions
like low pH and light textures that are low in organic matter as also having
an impact. “Most soil applied herbicides are more biologically available
on lighter textured soils. In addition, some herbicides form more active metabolites
depending on soil pH,” says Sikkema, pointing to Sencor injury in soybeans
on high pH soils as an example.

As for application factors such as excessive herbicide rates, incorrect application
timing, herbicide drift and tank contamination, there are research and information
seminars available that are geared to providing growers with better resources
on managing the controllable aspects in the field. And Sikkema expresses his
belief that growers are becoming more aware of these situations and improving
in their management practices, as best they can.

No substitute for doing things right
Still, there are those who look at time constraints and suggest a number of
growers are still in search of what is the least expensive, the 'best' and the
'safest', all somehow wrapped in one easy solution. “There's one infallible
truth: Good, Cheap and Safe are never used in the same sentence,” says
Mervyn Erb, an independent crop consultant from Brucefield, Ontario. “We're
trying to fine-tune something that you cannot totally fine-tune. We're talking
plant physiology, we're talking weed control, we're talking herbicide and we're
talking about chemicals the crop has to metabolize.”

In short, says Erb, the plant has to literally eat the chemical agents growers
apply to them, and there is no fast or easy road to understanding that fact,
especially since so many variables play a role in the chemistry's performance.
Tillage systems, whether conventional, reduced till or no-till, can play a significant
part in determining how a plant will use the applied chemistries.

A grower's understanding of herbicide response is another barrier to avoiding
crop injury, says Erb. In one case, a grower he knows complained of puckering
in soybeans, and blamed an applicator for sprayer drift from across the road.
Yet on further inspection, the puckering was found to the lee of buildings where
drift could not have been a factor. Erb believes that even in those cases where
a response may be detected, yield loss is not always inevitable. “Just
because a crop has had some stress from herbicide application does not mean
it has hurt your crop,” says Erb. He says no-till growers can see more
stress in those years when root systems are struggling. “That being said,
some of the chemistries are harder to metabolize: some plants can do it, some
can't.”

Plants hardier than ever
One question that needs to be answered is whether growers are actually seeing
more herbicide injury. The variables are greater in number and more complex,
but Dave Kloppenburg believes crop injury is not a factor, at least where herbicides
are concerned. “The crop injury complaints are definitely the minority
of the calls we get,” says Kloppenburg, a field agronomist with DuPont
Canada. From a corn perspective, he adds, most of the seed companies do a good
job of screening out highly sensitive genetics to ensure there are fewer surprises
in the fields. “It's almost always two or maybe three factors that happen
simultaneously to get a situation where there's crop injury.”

In the case of puckering of soybean leaves, Kloppenburg says he believes that
to be a sign of tank residue, and despite that perceived injury, the ultimate
effect may be minimal. “Particularly in soybeans, because of their indeterminate
nature, you have to do something really bad to them,” he says.

Over-reaction among growers is a very common occurrence when assessing damage.
Extension personnel with the Ontario Ministry of Agriculture and Food have cited
cases where growers over-estimate feeding damage on a leaf to be 50 percent
instead of the actual 15 percent. Winter-kill in wheat is another example. For
his part, Kloppenburg cites a situation in corn fields in the spring of 2004,
termed 'Twisted Whorl Syndrome', where corn plants were in a rapid growth phase,
and the auxins within the plant were out of balance. “That plant looked
like it had suffered a herbicide injury, yet the field hadn't even been sprayed,”
relates Kloppenburg. “We have to be careful, and sometimes we're too quick
to jump to conclusions.”

Like Sikkema, Kloppenburg cites timing as another issue. From weather conditions
that restrict spray application windows to added on and off-farm commitments,
growers can find it hard to get into the field at just the right time. “Applications
that are made past the recommended leaf stages on the labels will bring a higher
potential for problems,” says Kloppenburg, adding the labels are there
for a reason.

If there is a silver lining to the crop injury picture, it may be that with
no new chemistries in the short-term, growers are forced to become better managers
with their herbicides. In the past, there was always the notion that whatever
types of resistance developed, there would always be another herbicide that
would come along. But such is not the case, and growers are becoming more familiar
with existing herbicides, their windows of applications, their interactions
with other chemical formulae and their ultimate impact on yield.

“The growers are getting better at using the products, there's no question,”
says Kloppenburg. “Growers are becoming more familiar with these products,
they know how to manage them and I think they get better with respect to herbicide
injury.”

The decision to spray a herbicide when a crop is already under one or more
stresses may influence which product is used and its timing. For growers who
are not confident about their knowledge of the various impacts, gathering advice
from a trusted source is a wise choice.