The Ontario Soil Network (OSN), is a one-year pilot project that aimed to support farmers who are improving soil health by implementing beneficial practices, like no-till and cover crops. 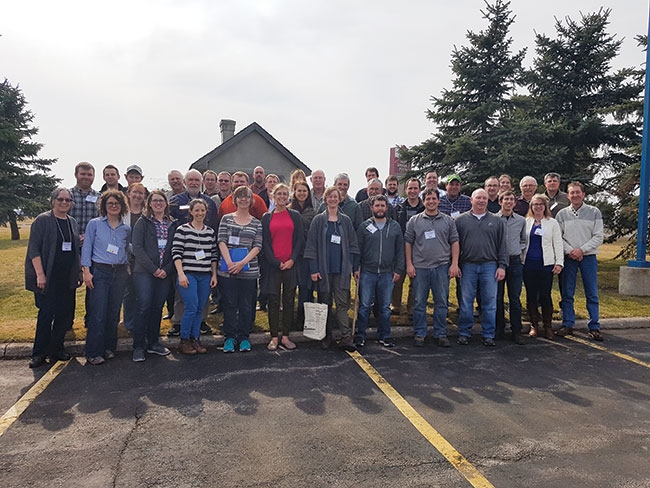 With funding from the Ontario Ministry of Agriculture, Food and Rural Affairs (OMAFRA), the OSN pilot project was a way of formalizing that networking process, says project co-ordinator, Mel Luymes. She says that instead of farmers going to a conference and hoping they will connect with someone doing similar things, they can have more deliberate conversations.

Thirty-five farmers who already had a track record of using practices that benefit the soil were selected to participate by the project steering committee. They started the year by taking part in a leadership training workshop where they learned about designing meaningful field trials, how to improve their presentation skills and learning about the latest in farmer-to-farmer soil initiatives that benefit soil in Quebec and the U.S. Approximately 15 representatives from conservation authorities, government and industry were also involved in the workshop.

According to Luymes, about twice as many farmers applied to participate in the OSN as could be accepted. OSN participants will be sharing their experiences at various farm meetings this winter. The project was intended to give them the confidence and presentation skills to communicate their message effectively.

She is quick to point out that the Soil Network is not an exclusive club. “Anyone can tap into the conversation,” she says. Farmers are encouraged to sign up on the OSN’s website (ontariosoil.net) to find out about small group discussions that will be taking place this winter. “There’s no membership and no fees,” says Luymes, who hopes there will be dozens of conversations with small groups of ten or fifteen people. “Small conversations, shop talk…is where you do more learning,” she says.

To create awareness about the project, profiles of some of the participants and their soil health practices have been popping up throughout the industry. Farmers can also join the conversation on social media using the hashtag #LetsTalkSoil.

With some additional funding provided by OSCIA, Anne Verhallen, OMAFRA soil management specialist and steering committee member, says her team of summer students was able to sample fields at each participant’s farm to determine baseline soil health parameters. These included fertility, pH, aggregate stability, water infiltration rates, residue cover counts, earthworm counts, and penetrometer readings that estimate soil compaction. Agriculture and Agri-Food Canada and the University of Guelph are also conducting a bioanalysis of soil samples to better understand the science behind the, “Soil Your Undies” test (which assesses soil health based on the rate of decomposition of cotton underwear buried in the soil).

“Farmers will have these results available to them when they are giving presentations and it provides a baseline for future comparisons,” Verhallen says.

OSN steering committee member Ken Nixon, a farmer in Ilderton, Ont., hopes the network will help break down barriers between growers. “While those of us practicing no-till or growing cover crops aren’t as fringe as we used to be, there still needs to be a dialogue between growers,” he says. “Too often the ‘black dirt’ farmers slow down to see what the ‘crazy neighbour next door’ is doing, but seldom drive in the driveway to ask questions.” As a result, Nixon says those doing innovative practices can feel marginalized and forced to keep to themselves or only interact with a select group of like-minded people.

Kootstra has seen the benefits of these practices in the soil on his farm. “We’re already seeing reduced wind and water erosion and improved water infiltration,” he says.

Many farmers know there is a problem but aren’t sure what’s wrong, says Kootstra, who believes cover crops are essential for improving soil health. “If we can increase soil organic matter a lot of these issues go away or become a lot less difficult.” Cover crops work with nature, are beneficial to the farm and to the environment, he says.

The one-year pilot project will wrap up this month (February 2018) but Luymes is hopeful that the network will continue to evolve and get the resources it needs. “It’s about investing in farmers’ solutions,” she says. For the pilot project, there was a concentration of farmers from southwestern Ontario but Luymes would like to see it expand to the rest of the province.