CWB monopoly period
During the heyday of the Canadian Wheat Board (CWB), that organization was able to effectively utilize its monopoly to position Canadian wheat, especially CWRS and Canada Western Amber Durum (CWAD) as the best in the world – along with organizations like the Canadian Grain Commission, Cigi and Agriculture and Agri-Food Canada. However, CPSR never seemed to achieve the marketing potential it possessed as a medium quality baking wheat.

So will this new open-market environment allow for an appreciable growth in CPSR acres on the Canadian Prairies? Over 25 years of breeding have improved CPSR wheat to the point where it is now considered to have hard kernel texture and strong dough properties. It has very good milling performance with high flour yield comparable to CWRS and, according to Dr. Bin Xiao Fu, research scientist at the Canadian Grain Commission’s (CGC) Grain Research Laboratory, CPSR could be a valuable alternative to higher protein wheat, like CWRS, in those baked products where high protein content is not a requirement.

“Protein levels required depend on the type of bread being made and the process to some extent,” explains Fu. “CPSR will usually struggle to get over 13.0 per cent protein consistently and has lower water absorption, but it does have desirable strong gluten properties and much better baking performance than the older CPSR varieties.” CPSR is also suitable for making certain types of Asian noodles.

The CPSR class was established in the mid-1980s to be a lower protein alternative to CWRS. It was known at first as the “3M” wheat, meaning medium protein, medium kernel hardness and medium dough strength properties. There were two colour sub-classes – CPSR or red kernels and Canada Prairie Spring White (CPSW) or white kernels.

The yield advantage CPSR had over CWRS is now starting to narrow as breeders release better CWRS varieties with high yield potential. But CPSR still has an edge over CWRS and that, together with less consistent protein premiums for CWRS, may be all it takes to make CPSR more attractive to producers.

There are other breeding advances that have occurred over the years as well such as increased yields, earlier maturity, improved resistance to pre-harvest sprouting and the introduction of the Sm1 gene for orange blossom midge tolerance. Most recently at the spring registration meetings, a CPSR was registered stacked with a consistent R rating for both Fusarium resistance and midge tolerance. These advances will go a long way toward protecting grade and will be quickly adopted by producers if the adoption of such advances in the CWRS class is anything to go by.

Seed companies generally are looking to acquire genetics that they determine will see demand in the marketplace from commercial growers. Canterra Seeds, like others, has invested in the new wave of CPSR varieties that are now being commercialized. According to Brent Derkatch, director of operations and business development at Canterra Seeds, CPSR is a growing market.

“Growers like the agronomic attributes of CPSR varieties,” he says. “With 10-20 per cent yield advantages over CWRS depending on the variety, and with protein premiums fluctuating for CWRS, the net cash return on a per acre basis for CPSR is very attractive.”

With more demand from end-users for medium protein wheat, Derkatch believes there is good upside to CPSR acres. “From a seed perspective, we are also seeing investment from both public and private sources into CPSR breeding programs, so there will be continued improvement in this class of wheat,” he notes. “Additionally, the Quality Evaluation Team on the Wheat, Rye and Triticale Recommending Committee has expanded some of the quality parameters for the CPSR class.”

Canterra Seeds, like other seed companies, is prepared for increased CPSR seed demand, launching Conquer VB in 2013. “Breeders are introducing much-needed resistance to various diseases and insects that can cause yield loss and quality downgrades,” says Derkatch. “Conquer VB is an example. It’s the first midge resistant CPSR registered and commercially available.”

It seems that as the western Canadian wheat market adjusts to more direct signals for different types of wheat apart from CWRS, there will be upside potential for wheat classes like CPSR and others. This trend will be bolstered by the decades of research that are now bearing fruit in terms of the strengths new varieties are bringing to bear on the farm. 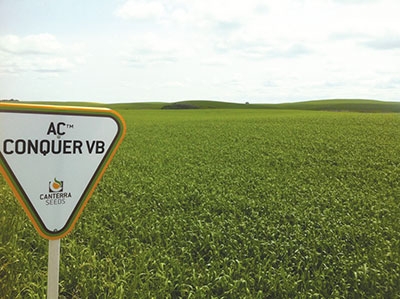 AC Conquer VB is the first midge tolerant CPSR wheat in commercial production in Western Canada. According to Statistics Canada