Illinois State University graduate Ken Ferrie owns Crop Tech Consulting, an independent company that consults on a
variety of crop-related issues. “We consult on just about every aspect of farming, except for the marketing,” says Ferrie. 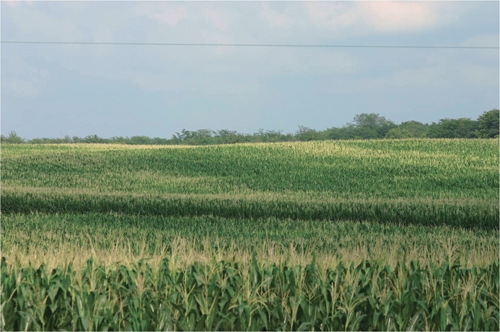 This includes providing management tips on disease and pest control, soil density issues, herbicide plans, and tillage.
“If I’m going to make a recommendation for something as complicated as a herbicide plan or how to set a planter out or what type of tillage to do, I’ve got to have what I call “boots-on-the-ground experience,” says Ferrie. “I want to see something work and evaluate it.”

Ferrie’s boots-on-the-ground experience comes from operating some 150 field trials on corn, wheat and soybeans each year. His recommendations are based on firsthand observations in the field, and his solutions are tailored specifically to the individual farmer’s needs.

What does a good stand of corn look like?
When visiting a corn producer’s farm, Ferrie will first ask what that farmer’s stand looks like. “There will be certain things that I look for when I ask that, seeing how attentive he is to his actual corn stand.” First of all, they should be keeping thorough records of any and all information pertaining to their crops, he says. To do that, you’ve got to get out into the fields.

“It’s something that you can’t see from the pick-up at 60 miles an hour,” says Ferrie. Of the plants you put in the ground, what emerged? What is your final ear count? These things matter. What you’re looking for is a uniform stand, says Ferrie, including what he calls ‘the photocopy’ and the ‘picket fence stand.’

He’s right; at the end of the day, it’s high ear counts, not high populations, that make yield. If you have 32,000 plants in the field, but only 27,000 put ears on, you’re wasting valuable resources that could be available for other plants.

The picket fence stand
As far as a picket fence stand goes, you’re looking for uniform spacing. Proper spacing ensures that each plant gets the maximum amount of sunlight and resources, and minimizes competition between plants. To do this, you have to actually go out in the field and do an evaluation. What do you see? Do you see doubles, triples, or skips?
“No disease or insect causes this,” says Ferrie. “It’s something you did in your management cycle that we have to go back to.” The problem is with the planter itself, he adds. It could be a metering problem, or it could be the seed size you’re working with. It could also be your planter speed.

“One thing you realize is that as you increase your population you’re going to tighten up your spacing between plants, but you’re also going to speed up your meter,” says Ferrie. “So if your meter was having trouble at 28,000 and you decide to go to variable rate and push some parts of the field at 36,000, your meter has to turn a lot faster. In that process you can destroy your stand using variable rate because you jacked your population, but didn’t slow your forward speed of the planter down.”

If it’s not a metering problem, then a problem exists with the delivery system itself. “It could be an improper seed tube.
It could be an eye that’s not set up correctly in the tube, causing ricochet. Probably the number 1 problem we run into with seed tube ricochet is planter levelling.” If every row in the planter has a misplaced seed, then it’s probably a planter levelling issue. If the problem occurs only in certain rows, it’s likely a seed tube or metering issue. Skips are an issue too. “I’ve done a lot of studying, and I’ve never seen a skip produce an ear yet,” he says. “So we need to eliminate them.” Again, the problem could be a malfunction of the meter. If it’s a common occurrence in your field, you’ll want to identify the problem as soon as possible. By eliminating just one hiccup, says Ferrie, you could have as much as a six to seven bushel per acre increase.

“I can find sometimes as high as 4,000 to 8,000 barren plants in a 1,000th of an acre and the grower doesn’t understand it,” he says. Every one of those barren plants is taking in water and nitrogen, nitrogen that you have to apply so it doesn’t steal it from your healthy plants and productive plants.

“If you had 8,000 giant ragweed sticking three feet above your corn at the end of the year, what would you do? There’d be a drive-by shooting at the co-op,” he laughs. “Someone would have to answer for it. But you could have 3,000 to 8,000 weeds out there in the form of a corn plant, and it’s OK?”

Identifying the problem
Although there’s nothing you can do to improve your crop’s potential – its potential is contained within the seed itself – you can work to maintain that potential. “You just have to salvage it, because it’s going to start to adjust to the environment around it and dial its yield potential down to fit its environment,” says Ferrie.

In order to determine and address issues in your crop, you need to know the growth stages of your plants. “The first five leaves are in the kernel. It’s a situation where when we get to V5 or V6 we’re starting to put on new leaves, says Ferrie. “But already at the fourth collar, this plant is starting to negotiate its overall potential. Remember, the potential is here. Now it’s trying to decide am I going to stay there or do I need to adjust this down to produce at least one viable seed?”
Between the fourth and fifth collar, it’s starting to make some decisions on which ear will be the dominant one. If the plant gets under a considerable amount of stress, for example, it will compensate by selecting a lower ear. Corn’s a funny plant, says Ferrie. It can manage stress on its own, when it comes in a naturally occurring way, but catch it unaware and the consequences can be dire. For instance, says Ferrie, some farmers think that cultivating their corn produces higher yields. In his experience, it does not.

“You have a corn plant that’s rocking and a-rolling, heavy transpiration, and it’s just growing like crazy, and somebody comes through and just rips out its plumbing, and it’s a sudden shock to roll it up, that system is too hard on it. Same thing can happen with a herbicide application.”

That’s the problem with corn: once it shuts down, it doesn’t come back. “So if it goes from 50 long to 20 long, it goes from 18 round to 12 around – once those decisions are made, no matter how good the growing season is for the rest of the year, it’s not coming back,” he says.

Uneven germination
Not all of your corn plants are going to emerge on the same day, but they do need to germinate within 48 hours of each other. Seeds that germinate outside of that 48-hour window are probably not going to produce a harvestable ear because delayed plants can’t compete with the older plants.

When corn roots are the same age and the root systems meet underground, there’s some compatibility. “But if the corn plant next to it germinates outside of that 48-hour window, the growth, and the hormones and enzymes within the root system, are not recognized. When it crosses the older plant, they don’t recognize each other as a corn plant. They sense each other as competition. So it’s kind of like a giant ragweed,” says Ferrie.

The number 1 cause of uneven germination is uneven planting depth. Moisture and temperature variability are also problems. “While I’ve gained in population by planting deeper, I’ve lost more ear count from deep planting than I have from shallow planting. When you plant too shallow, you know it and so do all your neighbours.”
Other problems include poor seed to soil contact; uneven crop residue; poorly adjusted planters; soil crusting, which can be a function of your soil health; and insects and disease.

Seed quality becomes part of this issue too, says Ferrie.

“If you’re going to plant in cold conditions, make sure you’re doing so with good seeds.” So what’s the bottom line? “The maximum grain you can produce is in the bag when you buy it,” says Ferrie. “Already, by V6 or V7 you have reached your maximum kernel set. It can only go down from there or get worse, depending on the situation.” While weather conditions are certainly out of your control, many of these other issues are within your control. It’s all in how you manage your crops.