This pest’s increasingly early arrival in Ontario plus its Bt resistance could be a double whammy for field crop growers. 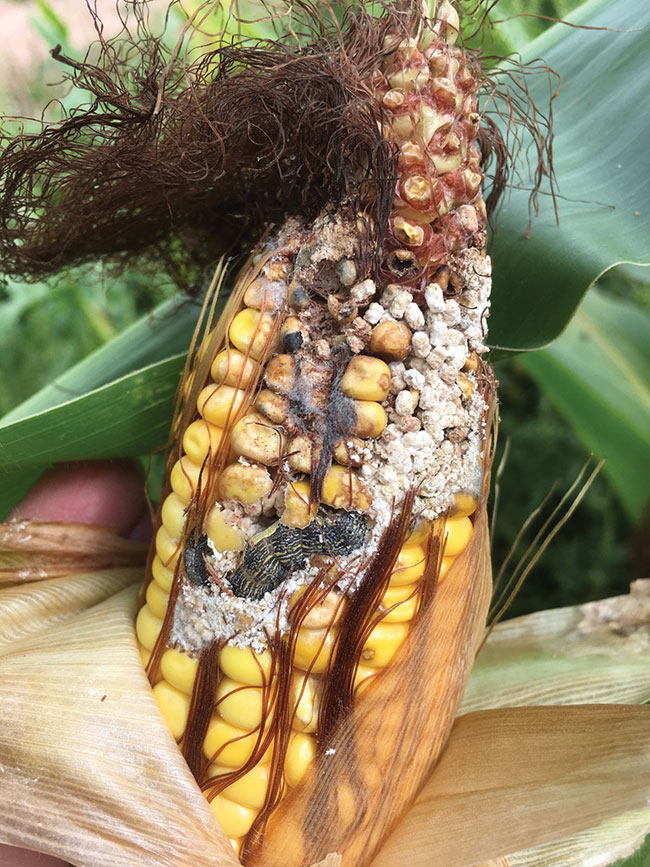 Corn earworm (Helicoverpa zea) has the potential to become a serious pest in Ontario field crops. With milder winters, the moth is migrating earlier into Ontario, increasing its ability to impact field crops like corn and beans. At the same time, control options are limited because the incoming populations already have resistance to some Bt proteins and insecticides.

This insect has multiple generations each year in its traditional overwintering range in the southern United States and further to the south. The moths are carried north toward Canada by windy and stormy weather. However, the pest’s overwintering range has been gradually extending closer to Canada.

“Corn earworms used to overwinter just in southern states like Florida and maybe Georgia. But now they are likely overwintering close to Pennsylvania. So they can come to Ontario a lot earlier than they would have in the past,” explains Tracey Baute, field crop entomologist for the Ontario Ministry of Agriculture, Food and Rural Affairs (OMAFRA).

“Ten or even 20 years ago, we didn’t see flights of corn earworm moths into Ontario until about August, or sometimes late July if they were early. So they were a late-season pest, and their impact wasn’t as much of a concern in Ontario, especially for field crops,” she notes.

“However, in the last five or maybe even the last 10 years, that migration has been earlier.” In some years, earworms have been caught in Ontario as early as June. “With these earlier arrivals, there is potential for more fields to be attractive to the pest.”

She adds, “Corn earworms are not yet overwintering in Ontario because they are really sensitive to freezing temperatures. That said, climate models indicate that our winters may become more mild, and in about 20 years the pest could overwinter here.”

Damage risks
This pest has a broad host range that includes crops such as tomatoes, peppers, alfalfa and cotton, along with corn and beans. The larvae prefer to feed on the fruit or reproductive parts of the host plants.

“In corn, the moths lay individual eggs directly on the silks. The eggs are the same colour and diameter as the silks, so they are almost impossible to see. [After hatching, the larvae crawl down the silks to the ears, feeding on the silks and then the kernels, beginning at the tips of the ears.] The pest often goes unnoticed until growers see the larval damage, for instance, when the silks are off the ear or the ear isn’t properly pollinated,” Baute says.

Corn is most attractive to egg-laying earworm moths when the crop is at the fresh silk stage. “In Ontario, earworms tend to go to sweet corn first, partly because of the timing of when the sweet corn tassels and silks come in. But earworms can also impact grain corn,” she says.

“So far, it looks like this pest has less of an association with ear moulds than western bean cutworm. But that may be because of the earworm’s timing at present; earworms may not be spending as much time in the ears as western bean cutworms do currently.”

Baute notes, “In beans, the earworm tends to go to crops like snap beans, which may be a little later than the typical dry bean or soybean period here. Earworms are similar to western bean cutworms in that they mine into the bean pod and feed on the seeds inside, and their damage provides an entryway for pod diseases.”

If earworm continues coming into Ontario earlier and earlier, it could have greater impacts in field corn, and it might increasingly attack dry bean crops and even late-planted soybean fields.

Resistance challenges
If the need for managing this pest increases in the coming years, Ontario field crop growers will have to grapple with the limited options available for managing it.

“Down in Georgia, Texas and West Virginia, earworms are a pest in both cotton and corn. Both of those crops have Bt proteins. So that pest has not only been exposed to a lot of foliar insecticides but also to all three of the Bts that are used against it,” Baute explains.

As a result, earworm populations in the U.S. have developed resistance to two of those Bts: Cry1Ab and Cry1A.105+Cry2Ab2. The earworms migrating to Ontario originate from those populations. “Even though we really don’t target our Bt crops for earworm in Ontario, we know the earworms coming here are already able to overcome those same two Bt proteins, based on a few field issues here in 2018.”

Only Vip3A is still effective on corn earworm. “In the United States, they are monitoring Vip3A to check that it is still working. However, because it is the only remaining Bt for controlling earworm and it is heavily used in both corn and cotton, there is a good chance that the pest will develop resistance to Vip3A too,” she says.

“So if earworm becomes more of a concern in our field crops, we may be looking at the type of control strategies they have to use in sweet corn, which is to spray more often. And that is also a problem because the insect has developed resistance to some of those sprays in the States.”

On the watch for earworm
Baute emphasizes that the threat of corn earworm should not be taken lightly. She points to the example of western bean cutworm, another pest that is now down to a single Bt protein (Vip3A) for its control, and which has quickly developed into a significant problem in Ontario beans and corn since the insect started expanding its range to the province.

“Corn earworm is something that we need to monitor for and really pay attention to. We need to know how early they are coming in, so we can determine if we are going to have to start managing the pest in some of our field crops,” Baute says.

This network is a collaboration of provincial and state representatives from Michigan, Ohio, New York, Ontario, Quebec, New Brunswick, Prince Edward Island, Nova Scotia, and Newfoundland and Labrador. Baute notes, “The shared trapping with neighbouring jurisdictions helps give us a heads-up to know what’s going on.”

Of course, Baute and her colleagues also respond when growers or crop scouts report unexpected insect damage so they can check for issues like resistance to Bt proteins or insecticides, changing patterns in existing pest threats and emergence of new pests, and to provide management advice for dealing with such problems. 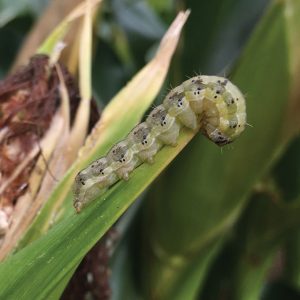 The corn earworm has the potential to become a serious pest in Ontario field crops. 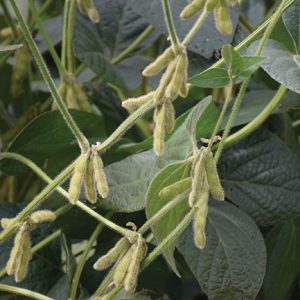 Insecticide should be applied before larvae can enter the bean pods or corn ears. photo by top crop manager.

Another Helicoverpa on the way?
Corn earworm’s nasty cousin from the old world, Helicoverpa armigera, has recently come to the Americas. It can damage both the vegetative and reproductive stages of plants, it has a wider host range than corn earworm, it can develop pesticide resistance very quickly, and it can hybridize with corn earworm.

Helicoverpa armigera was first confirmed in Brazil in 2013. It has already spread to several other countries in South and Central America, and it seems to have the potential to spread further north.

“They have had detections of Helicoverpa armigera in Florida, and they are concerned about it in Texas and are monitoring for it. As long as we stay aware of those monitoring activities, that will help us know whether this insect could actually start to migrate this way or not,” Baute says.

“I’d be very surprised if Helicoverpa armigera could overwinter here. But who knows? Especially if it has a hybrid that has more cold tolerance and a greater ability to overwinter closer to Canada, that could be a game-changer.”

Earworm advice
Planting host crops early will help make your fields less attractive to corn earworms than nearby fields. “Plant as early as possible – without putting your crop at risk of another pest because you planted early. You’ve got to decide what is your primary pest issue and adjust accordingly,” Baute advises.

To watch for earworms in corn crops, it is best to rely on traps rather than trying to scout for the difficult-to-see eggs. “Many sweet corn growers already have their own traps for corn earworm because they time their sprays by those traps,” she notes.

“In field corn, growers will at least need to rely on our monitoring network, and in the future they may want to set up their own traps. They need to pay attention to when the earworm flights occur because that is really the only indication of whether the pest is around and whether it may need to be sprayed.”

If you find earworms (or western bean cutworms) in your Vip3A corn, contact your seed agronomist or Baute so they can confirm if resistance is present.

“When it comes to dry beans, snap beans and even soybeans, growers need to look for feeding injury by this pest and maybe start trapping to monitor for it,” Baute says.

“Earworms leave a hole in the pod as they enter to feed inside it. Because the larvae are less nocturnal than western bean larvae, you may actually find the earworm larvae inside the pod when you open it to investigate what is going on.”

She notes that spray timing can be tricky, especially in crops where only one application is economical. The insecticide needs to be applied before the larvae go into the ears or bean pods, where they are protected from the spray.

Baute concludes, “It will be interesting over the next 10 years to see whether corn earworm becomes more common in Ontario crops. Especially with climate change, the pest will be given more opportunity. Hopefully, we won’t lose the effectiveness of the Vip3A protein against it. If that happens, then we will have to turn to foliar insecticides, and no one wants to have to do that. But our monitoring network should give us a heads-up if we do have to manage earworm in our field crops.”