Corn and soybean planting deadlines have been extended two and five days respectively in response to wet weather in southwest and eastern regions of Ontario.

Agricorp, the crop insurance provider of Ontario, has extended the production insurance planting deadlines for corn and soybeans for some regions of Ontario in response to difficult planting conditions across the province.

Decisions to extend planting deadlines for production insurance require approval from the Ontario Ministry of Agriculture, Food and Rural Affairs (OMAFRA) and Agriculture and Agri-Food Canada (AAFC). Agricorp stated that after assessing the risks and consulting with industry, they will be extending the planting deadlines for corn, soybeans and coloured and white beans in select regions.

The planting deadline for select regions has been extended by two to five days as a result of wet weather. Chart courtesy of Agricorp. 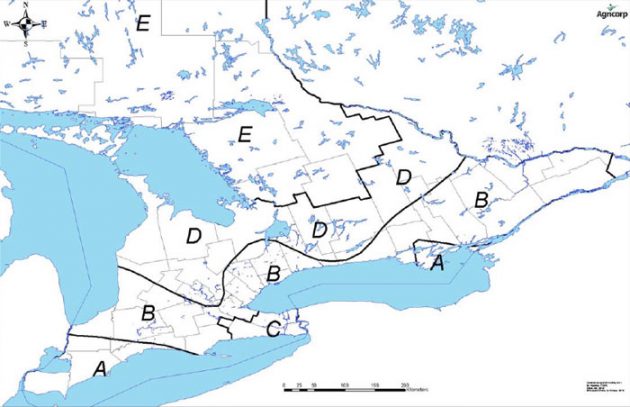 In order to keep producers informed, over the coming weeks Agricorp customers may receive a number of short automated email and phone messages from Agricorp. Agricorp explained that each message is different and each customer is encouraged to listen to, or read, each message. The calls and messages are done in effort to keep producers informed of planting extensions and important upcoming dates.

In addition to Agricorp, other programs can help. Ontario producers still have time to enrol in the Agristability program, where the deadline has been extended until July 2 as a result of the China-canola trade dispute.