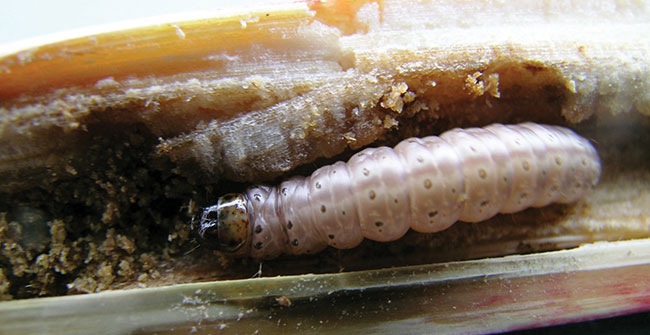 With cooler temperatures and a shorter growing season, there’s less corn in Western Canada than in southern Ontario and Quebec.

But corn is still a constant, particularly in Manitoba, which grows a little over six per cent of Canada’s grain corn annually, according to a 2021 Manitoba Agriculture report. In 2021, at 367,856 reported acres, corn was Manitoba’s sixth largest crop after canola, wheat, soybeans, oats and barley.

MCA has funded a range of projects over the last several years, including studies on cold tolerance, Goss’s wilt, nutrient rates, and residue and trash management, and a trial on plant population and row spacing led by University of Manitoba Department of Plant Science researcher Yvonne Lawley. MCA also conducts annual hybrid evaluation trials for both grain corn and silage corn – a program that’s been running for decades, Cott says.

Another Research on the Farm trial, on the effects of split nitrogen application in grain corn, wrapped up in 2019. In that trial, Cott says, farmers applied upfront N at either full or reduced rates (40 lb N/ac less), then applied the remaining 40 lb N/ac to lesser-fertilized strips in-season as side-dress injected, broadcast, dribbled or Y-dropped UAN.

Of 21 field tests, yield improved only twice. In one instance yield decreased, due to a delayed split application.

Cott says MCA is currently evaluating research proposals and will be deciding over the fall and winter months which projects to fund. “We look to our corn committee delegates for ideas, but if producers are thinking [about] what might be something great to see on their farm or [see] other farmers participate in, that’s really great information for us to have,” she says. “Even when we’re sending out calls for proposals for researchers, we can give them specific ideas of what we want to look at. We’re always looking for ideas.”

Corn pests and diseases
John Gavloski is the provincial entomologist with Manitoba Agriculture. He says the top corn pest is still European corn borer (ECB), although for producers growing corn multiple years in a row, corn rootworm can also be a problem. 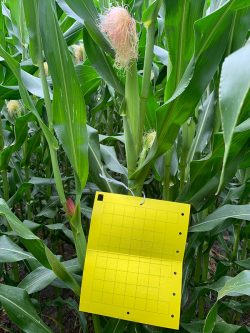 ECB is a generalist feeder, which means there’s a wide range of potential hosts in Manitoba, including corn, potatoes, hemp, quinoa, millet and a range of other field and horticultural crops. To better monitor the pest and its impacts on Canadian agriculture, Gavloski says the Insect Surveillance Community of Practice of the Canadian Plant Health Council has developed a harmonized monitoring protocol for ECB. Producers can use the protocol to monitor the pest and report the data using a survey tool on the Survey123 app. The data can then be used to track which crops ECB is affecting, when in the season, and at what levels, among other information.

Gavloski says ECB hasn’t created major problems for most corn producers in Manitoba for a number of years. “They’re around, we get them, and historically we’ve had flushes of them where they’re bad for a few years and then levels go down, but with ECB Bt corn, the damage to corn has been reduced,” he says, noting that for grain corn growers who have had recent corn borer problems, Bt corn is the choice for the following year.

But Bt isn’t a forever solution. ECB resistance to Bt corn has already been recorded in Nova Scotia, and if a strain of Bt corn is overused on a farm or in a region, eventually the pest will develop resistance to it. Gavloski encourages producers growing hybrids with ECB resistance to rotate Bt traits to keep them in play as long as possible.

For corn rootworm, rotation is by far the most effective control. “Find a way to get that field out of corn for even a year or two. That should be strategy number one,” he says. “If that’s not an option, use rootworm-resistant Bt corn as a backup strategy. For corn rootworms, rotation will be effective, [and] it’s a much trickier thing for them to develop resistance to than Bt corn.”

Nutrition
John Heard, Manitoba Agriculture’s crop nutrition specialist, says the province is in good shape regarding its fertility recommendations. “There’s been a lot of research done on N rates, placement, timing and sources,” he says.

But there are field surveys underway looking at updating nutrient uptake and removal values, he says. A few years ago, now-retired University of Manitoba scientists Don Flaten and Cindy Grant reviewed phosphorus guidelines in the Northern Great Plains region. “They said we need to revise guidelines with appropriate crop removal amounts. Current book values are over 30 years old for all Prairie crops,” he says.

Fran Walley, associate dean of the College of Agriculture and Bioresources, and a professor in the Department of Soil Sciences at the University of Saskatchewan, is heading that work along with Heard and Lyle Cowell of Nutrien. Some 14 Prairie crops are being evaluated, including grain corn.

“They’re mostly doing grain analysis for nutrient removal per bushel, but also selective whole plant analysis, for total plant nutrient uptake to see if we need to temper current guidelines,” Heard explains. This past year, Heard collected corn samples from 20 Manitoba fields to be ground up and analyzed for the study.

Last year, he says, he gave a talk showing that many American states are ahead of Canada on this work. Ohio, Minnesota and Illinois have undertaken similar projects, he says, and found that corn is “a whole lot more nutrient efficient than it was 30 to 40 years ago. I’m not sure our data will show the same thing, but that’s their data.”

Bt trait rotation
The Canadian Corn Pest Coalition annually updates a list of Bt corn products available in Canada, which can help corn growers and agronomists ensure ECB is not being exposed to the same Bt proteins in consecutive years: cornpest.ca/wp-content/uploads/2022/04/Modified-Bt-Table-for-April-2022.pdf