In a year like 2016, when sclerotinia stem rot was widespread in canola, the expectation might be that the disease (called white mould in soybean) could have been problematic in soybean as well. Not so, says Dennis Lange, industry development specialist for pulses with Manitoba Agriculture in Altona, Man. 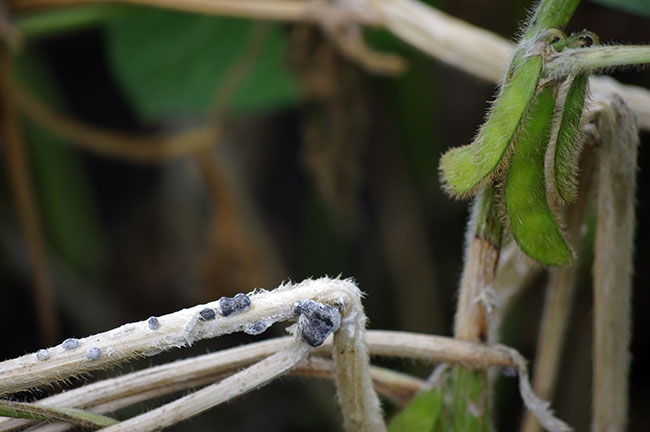 “In soybeans, we first heard about white mould problems in 2013 when some cases showed up in the northwest corner and the Red River Valley. But for the most part, disease levels were low at around five to six per cent in the worst cases,” Lange says. “I haven’t heard of any widespread problems in 2016 on soybeans.”

As Lange explains, the difference in infestation between soybeans and canola is that soybeans are generally more tolerant of white mould, partially because of different growth habits. Soybean flowers are smaller and lower in the canopy, so they aren’t as susceptible to the sclerotinia spores that circulate on the wind.

“If you look at 2013, which likely had the highest white mould levels in soybeans, our average provincial soybean yield was a record 39 bushels per acre, so there wasn’t much of an impact from the disease that year,” Lange says.

Rather than being a widespread problem in Manitoba, Lange says soybean growers should consider the disease on a case-by-case basis. For example, if a soybean field is planted on narrow rows in the Red River Valley on a field surrounded by trees that limit air circulation, the potential for yield loss is possible if there is frequent rain during flowering.

Another NDSU study evaluated 14 soybean varieties of maturity 0.2 to 0.9 seeded on rows 14 inches apart. Differential irrigation was utilized to simulate different rainfall patterns during bloom (frequent light rainfall versus infrequent heavy rainfall, with the total amount of irrigation applied held constant). This trial found a 1.7 to 3.9 bushel per acre yield loss for every 10 per cent increase in sclerotinia incidence.

“Those results are broadly consistent with other research trials. It is a pretty wide range of yield loss, because it depends on when cool and wet conditions arrived during the blooming stage of soybean,” Wunsch says.

“Efficacy of a fungicide is more than how well the active ingredient controls the target fungus.  It is also how well we can get the fungicide where it needs to go – how well it translocates in the target crop,” Wunsch says.  “If you compare Lance and Proline [prothioconazole] in canola and sunflower, for example, when you get good coverage they perform the same. But if you have poor coverage, Proline doesn’t perform as well.”

Wunsch says that while R1 is the preferred application timing for Acapela, Priaxor, Allegro and Delaro, that has more to do with getting good coverage than the growth stage at which soybeans exhibit maximum susceptibility to white mould. In North Dakota, the conditions for optimal disease development – a closed canopy with moist conditions during flower – don’t usually occur until R2.

“My sense is that with the chemistries other than Lance, if we could get good coverage at R2, they would provide the same control as Lance does when applied at R2. But since they don’t translocate as well, they need to go on at R1 for best activity,” Wunsch says.

Running the numbers, Wunsch deterimined the break-even point when fungicides became profitable. He used a $27 application cost for the fungicide (fuel and labour included), a white mould control level of 45 per cent, and a yield loss range of 1.6 to 4.6 bushels per acre for 10 per cent disease incidence. For example, if the soybean price was $10, a fungicide application would have broken even if the sclerotinia incidence level at the end of the season in the check strip ranged from 15 to 35 per cent.

Similarly, in Manitoba, with even earlier maturity than North Dakota, yield impacts could be lower and economic thresholds higher. Research by the Manitoba Pulse and Soybean Growers (MPSG) on 21 on-farm fungicide trials in eastern Manitoba in 2014 and 2015 found the yield difference between treated and untreated ranged from -0.4 to 3.2 bushels per acre with an average yield increase of 1.2 bushels per acre with fungicide application, but the yield increase was only significant at four of 21 sites.

The MPSG research found that at $25 per acre for product and application, and a market price of $11 per bushel, significant economic return from using fungicide was achieved only three out of 21 times. Low levels of mould were present in 2015 trials and none were found in 2014, explaining the low response to fungicides. These on-farm trials are continuing in 2016, and final trial results will be available during the winter.

“We really need to look at white mould impact and control on a field-by-field basis. Look at the disease triangle of susceptible variety, weather conditions and the presence of the pathogen,” Lange says. “So far we haven’t had a year where white mould was the talk of the town because of disease loss. There is always talk about it, but we haven’t found it to be a widespread problem in Manitoba soybeans.”