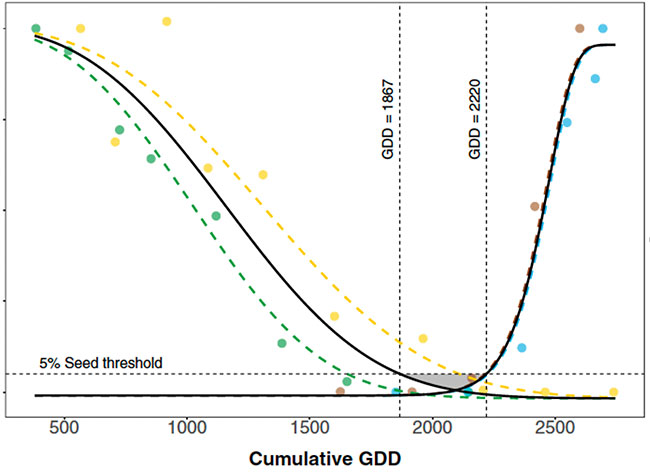 Critical Period of Weed Seed Control for kochia* *Viable seed production below the five per cent threshold may be achieved when kochia is controlled between 1,867 and 2,220 GDD (shaded area). Graph courtesy of Geddes and Davis, 2021.

Weed control has typically focused on preventing yield loss with the side benefit of controlling weed seed return to the seedbank. New research led by research scientist Charles Geddes at Agriculture and Agri-Food Canada in Lethbridge, Alta., and Adam Davis at the University of Illinois Urbana-Champaign, proposes to turn that approach on its head by developing an understanding of when weed control is critical to prevent the return of weed seeds to the seedbank.

Traditional weed control considers the Critical Period of Weed Control (CPWC). This is the time period when the crop must remain weed-free to avoid significant yield loss. For example, research at the University of Saskatchewan found that lentils have a CPWC beginning at the five-node stage and continuing to the 10-node stage. But, under this approach, weed escapes and later germinating weeds may still mature and return viable seed to the seedbank; contributing to weed establishment in subsequent years.

In a Weed Research journal article, the researchers introduce the concept of the Critical Period of Weed Seed Control (CPWSC), use kochia as an example of how that period is determined, and suggest future research approaches. The CPWSC is the period during the growing season when weed control will result in minimal weed seed production. The first component of CPWSC is how late a weed can emerge and produce viable seed before the end of the growing season, called the critical period for weed emergence (CPWE).

The second component takes into consideration the time it takes during weed seed development for the seed to become viable. This is called the critical period for seed production (CPSP), and it charts the increase in viable seeds up to a maximum number.

The researchers used kochia as a weed to demonstrate how the CPWSC could be used to manage the weed seedbank in the absence of crop competition. Data from two experiments in Lethbridge, Alta., were used to determine the CPWE (2014 and 2015) and CPSP (2018 and 2019). The CPWE experiment included multiple planting dates, and kochia seed production was evaluated in the fall. The CPSP experiment looked at kochia seed production at different harvest dates. Statistical modelling that overlaid the CPWE and CPSP was able to show the beginning and end of the CPWSC at zero, one, two, five, 10 and 20 per cent seed thresholds.

The CPWE showed that kochia plants that emerged prior to 2,140 Growing Degree Days (GDD), about the fourth week of August, were able to produce viable seed before the end of the growing season. For kochia, this means growers should pay attention to fall weed control. For example, management of kochia plants in late August/early September will capture all emerged plants able of producing viable seed before the end of the year. The CPSP showed that early emerging plants that were harvested as early at the third week of August (2,060 GDD) had viable seeds. This shows the importance of controlling kochia before it begins to produce viable seed.

When combining the two components, the CPWSC to reduce kochia weed seed production to one per cent (99 per cent weed seed control) was a four-day window between 2,056 and 2,120 GDD (equivalent to Aug. 16 and 19, based on 30-year climatic
normal temperatures). To reduce weed seeds returning to the seedbank by 95 per cent, the CPWSC had a wider window of approximately three weeks, between 1,867 and 2,220 GDD (Aug. 6 and Aug. 26).

The CPWSC developed by the researchers is the first step towards understanding how to time weed control to mitigate weeds seeds from returning to the weed seedbank. The concept will help guide management tools such as crop topping, where non-selective herbicides are applied later in the season (usually around pre-harvest timing) to target weed seeds. Weed wicking, cutting, clipping, mechanical pulling or strategic tillage are also being investigated to prevent the return of weed seeds to the seedbank. Crop rotations with winter wheat or silage could also help reduce the weed seedbank when harvest is timed during the CPWSC.